Today’s This Date in Pittsburgh Pirates History article covers two strong pitchers from the 1980s Pirates. Both Rick Rhoden and Rick Reuschel were born on May 16th. I went to our Card of the Day main page and tried to decided who to use between those two players based on past usage. Both of them had recent articles and multiple articles, so I switched gears and went with another pitcher born on this date.

Bob Patterson pitched for the 1986-87 and 1989-92 Pirates. So he was around for quite some time, and he was with the team for all three National League East championship seasons. He saw action in all three playoff series during the 1990-92 stretch and he allowed just one run. He’s definitely not an obscure player in Pirates history with the amount of time he put in, but as a middle reliever, he does get a bit lost among a group of big name players from those teams.

Today’s Card of the Day choice comes from the 1992 Topps Stadium Club set. This was the second year for this set, which were designed to be high-end cards able to compete with Upper Deck cards, after they took the baseball card collecting world by storm in 1989. These cards are higher quality products, and they cost more as well. The set included 900 cards as well, more than the regular Topps set, which made it challenging to collect. Here’s a look at card #876 from the 1992 Stadium Club set featuring Bob Patterson. 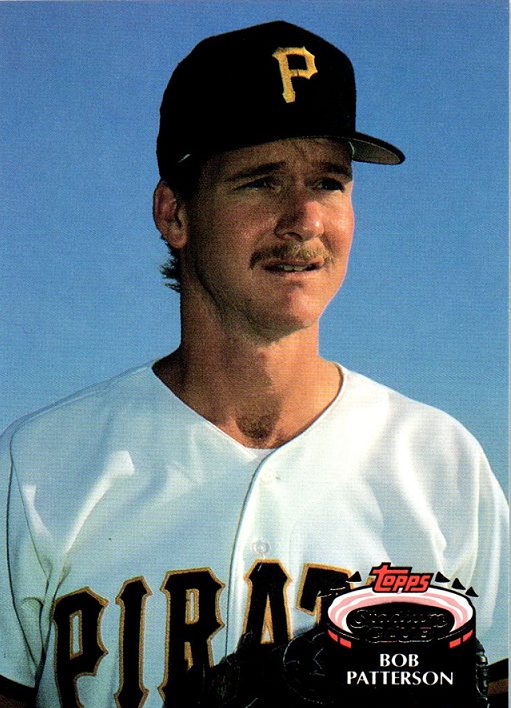 These cards were all about picture quality, which was great for back then. I couldn’t find a scan where the logo showed up well, but under “Topps” in glossy letters it says “Stadium Club” inside a poorly drawn stadium. Besides that logo, all the front of the cards had was the player’s name, with white letters and a black box for the name. Around this time, borderless cards were becoming all the rage. As I said, not much there, but the cards were meant to display the high quality glossy photos of the players and they didn’t need any distractions. 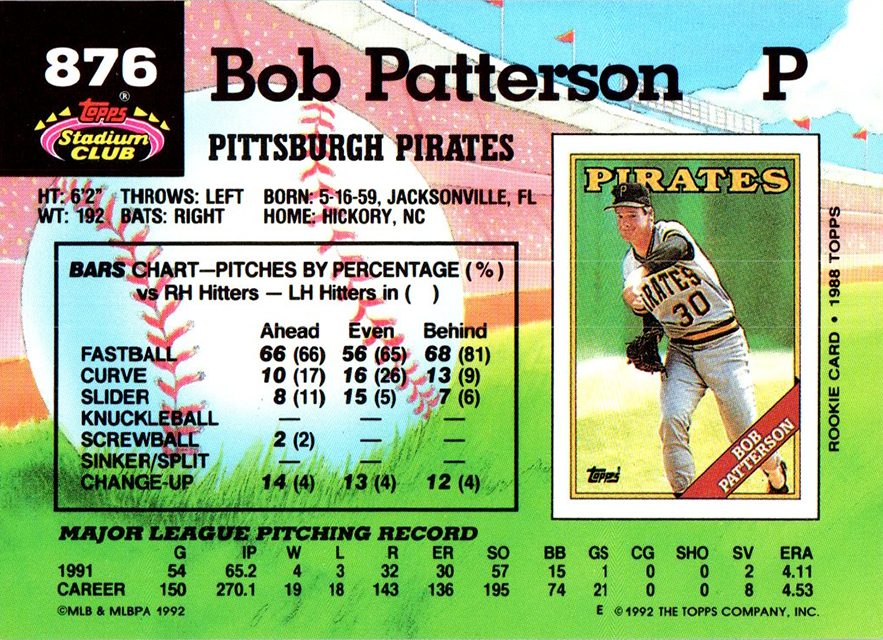 I bet some of you are looking at one of these backs for the first time and calling me a liar, but this is really the back of a 1992 Topps Stadium Cub card. It’s all business in the front, wearing a tuxedo to a party, then you turn it over and find out it’s a party for a five-year-old. It’s definitely colorful to say the least. I really like the idea of including a photo of the Topps rookie card for a player. That’s a unique touch that they added. The chart there for pitch selection in different counts is really interesting. I guess it has been a while since I looked at the back of one of these cards because I didn’t remember that pitch chart. Look how big that baseball is compared to the stands and wall behind it!

If you’re interested in picking up this card of the lefty reliever named Bob Patterson, you can find 15 examples on Ebay right now. A few of them were ones that were given out at the East Coast National Card Convention and they come with special stamps on the front of the cards.  The most expensive copy up right now is an autographed card, which is just over $10. There are quite a few dealers who are selling this card for just under $2 delivered (not including tax), so just check the scan and pick the cheapest one. Most won’t be selling ones that aren’t Near Mint condition, but it’s better to be safe than sorry.