Today is the 84th birthday of Pittsburgh Pirates pitcher Al McBean, who was with the team during the 1961-68 seasons, then came back for a short time in 1970. He is one of 15 Major League players born in the U.S. Virgin Islands. He appeared in this Card of the Day series for the first time exactly one year ago today, as we featured his 1963 Topps card on his 83rd birthday. Today we look at another 1963 card of McBean, this time using a set that hasn’t been utilized in this series yet. We have “post”ed cards from the 1961 and 1962 Post Cereal sets, but this is our first time using the 1963 set.

The 1963 Post set consisted of 200 cards that measured 2-1/2″ by 3-1/2”, as long as they were cut correctly. These cards were attached to the back of cereal boxes, so it was easier to find the cards that you wanted/needed. You didn’t need to search through packs, you could just ruin the shelves in the supermarket checking boxes. If you wanted cards of star players like Roberto Clemente or Mickey Mantle, you just had to hope that they were on a cereal that you enjoyed. You then had the choice to hand-cut the six cards per box individually,cut them into strips of cards, or just save the whole box, which almost no one did. Here’s a look at card #146 from that set, featuring Pirates pitcher Al McBean.

Here’s the front of the card (the back is gray/blank): 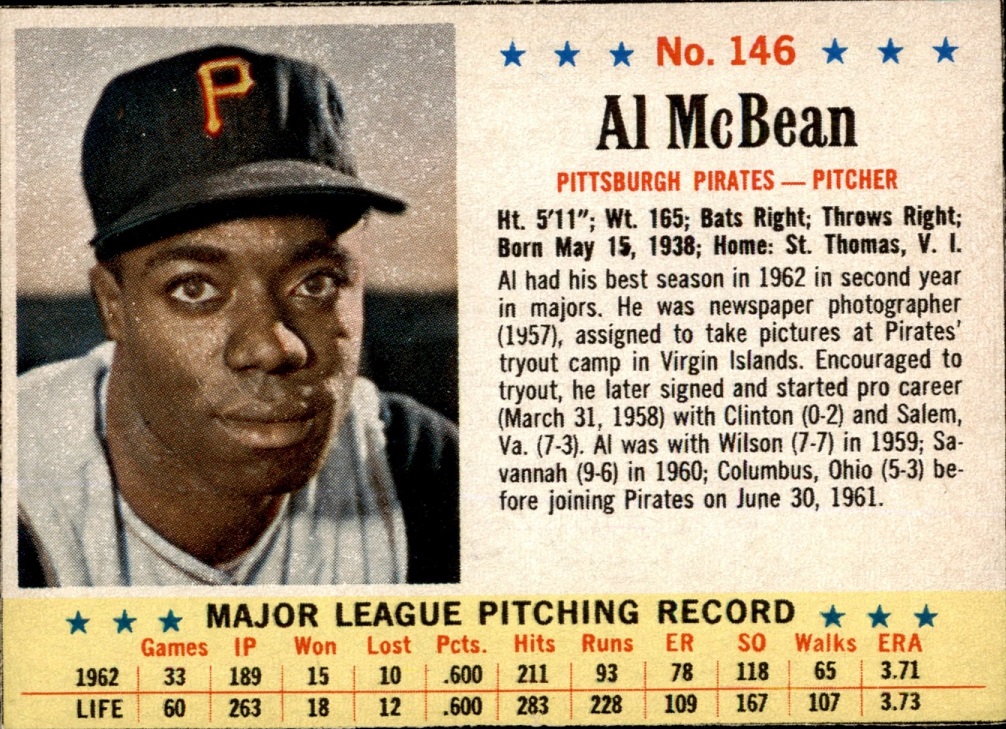 There isn’t a huge difference between the sets from Post. All of them have the same setup, with a photo side-by-side with a small bio, and stats at the bottom. The National League cards in 1962 are a bit more colorful. This set is more similar to the 1961 set, which didn’t have the stars at the bottom in the Major League Pitching Record section. Other than that, they basically used the same design. Maybe that’s why they stopped after three sets. They could have been out of ideas.

The bio section gives you a bit of details of his unlikely signing with the Pirates. An article I found from shortly after his big league debut, as told by McBean that day (July 10, 1961), said that he went to the tryout to take photographs because that’s what he wanted to do for a living. A friend who was there encouraged him to try out and Pirates scout Howie Haak supplied him with a glove and spikes. All he really did for the team that day was run, throw and field some grounders. He did well in the running (finishing second), and he showed off a strong arm, though there were some accuracy issues. The tools are what sold the Pirates, who gave him a $100 bonus after he threw some fastballs and curveballs for Haak.

If you’re interested in this card of McBean, you’ll be happy to find out that there are plenty of options on Ebay to fit your desired price and condition. One person has one grade PSA 7, with a $135 price tag (more than his signing bonus!) that is much higher than anything else on Ebay for this card. The next highest is the one in the scan I used above, which is going for $34. The price then drops more and the other 22 copies can all be found in the $4-$20 range, mostly in the middle of those two prices. Four copies of this card have sold in the last three months and all of them went for under $10 delivered.