That date in the title looks wrong to anyone who knows a little baseball history. Didn’t interleague play begin in 1997? Yes, at least in games that counted in the standings. In-season exhibition games used to be a thing in baseball. Teams would play other big league clubs, their own minor league clubs, and sometimes just random minor league teams that they weren’t affiliated with at the time. On May 14, 1962, the Pittsburgh Pirates and New York Yankees played an in-season exhibition game at Forbes Field. The full play-by-play wasn’t available from that day, but I have the boxscore and plenty of game notes from different sources, so let’s take a look at this interesting match-up from just 19 months after the Pirates won their third World Series title over that same Yankees team.

The Pirates had a 14-14 record coming into this game. They had just lost a Sunday game in Cincinnati on the 13th, and they were headed home for a three-game series against the Milwaukee Braves that started on Tuesday. So it was very little in the way of travel for them, but they were still giving up an off-day.

The Yankees were in a much different spot obviously with travel, but it’s even worse than you might imagine. They had a 16-10 record going into this Monday exhibition game. They were only coming from Cleveland on Sunday BUT (embiggened for emphasis) they played a doubleheader that day. After the game, they were headed to Boston for three games. That was quite different from the “one game on Sunday, before staying home to play on Tuesday” scenario for the Pirates.

I’ll note that the crowd for this game seems quite small, even for an exhibition game. The Pirates won the 1960 World Series over the Yankees. The Yankees then won the 1961 World Series (they would win again in 1962). You were getting a match-up of the last two World Series winners back before interleague play was a normal event. Yet the crowd at Forbes Field numbered just 13,355 that day. However, that wasn’t really a bad number. Teams did not draw well Monday through Thursday during the season. The next two Monday games at Forbes Field drew a combined 15,600 fans.

Prior to the start of this game, the two teams competed in a home run derby. It was clear that the local press didn’t appreciate what happened during the derby, as they were also a bit harsh in their wording for two players of note asking out of the contest.

Each team picked three players for the home run derby. The fans most certainly came to see Mickey Mantle and Roger Maris participate, but Maris “begged out of the contest”, saying that he was just getting his timing down and didn’t want the derby to ruin his swing. I can understand what he is saying, but at the same time, he was obviously huge back then, coming off of his record breaking home run season in 1961, so he could have just treated it like batting practice, and if he didn’t homer, the fans would have still been happy and nothing bad would happen to his swing. That’s even more true when you consider that the rules were each player got ten swings and that was it. Taking ten swings isn’t going to ruin anyone’s swing, so he probably deserved that little jab from the press.

The Yankees used Mantle, Moose Skowron and Johnny Blanchard, while the Pirates used Dick Stuart, Donn Clendenon and Jim Marshall, a first baseman who joined the club just one week earlier in a trade with the New York Mets. Once again, the press wasn’t happy with a player not participating, though no reason was given. Roberto Clemente “begged out” of the home run contest as well. Since no reason was given, it’s hard to say why he didn’t want to participate, but he should have for the fans. He played in the game itself, meaning it wasn’t injury related, so ten swings for the fans isn’t too much to ask. Nothing against Donn Clendenon (Clemente’s replacement) and Johnny Blanchard (who had power of his own), but they were not who fans paid to see.

It’s all spilled milk 60 years later, but I get why the press wasn’t happy about the decision of Maris and Clemente not to participate, so it was worth noting. Stuart won the event by the way, hitting three homers in his ten swings. Mantle hit two homers, as did Clendenon and Skowron, while Blanchard hit one and Marshall was shut out. The Pirates won the first part of the day.

On the mound in the game for the Pirates was rookie pitcher Bob Veale, who had all of 22.1 big league innings to his credit at the time. He wasn’t a youngster, as they would say in the 60s, already 26 years old at the time, but he was new to the majors. The Yankees were going with Bud Daley, who was just a few years older than Veale, but he was already in his eighth season in the majors.

As I said, there isn’t a full play-by-play available, so this is more of a summary of the scoring, while I included a photo of the boxscore below.

The lineup for the Pirates that day included Dick Schofield, Dick Groat, Bob Skinner, Stuart, Clemente, Bill Virdon, Bill Mazeroski, Cal Neeman and Veale. It was basically the regular lineup, minus Smoky Burgess behind the plate. The Yankees used all of their regulars, except Tom Tresh sat for backup infielder Phil Linz at shortstop.

Bobby Richardson singled to start the game, then Hector Lopez walked. Veale then had his teammates let him down, including a surprising error and a not so surprising one. The next ball was booted by Dick Stuart for the first run of the game, though the official scorer gave Maris a single on the play, which the press didn’t agree with apparently. Veale struck out Mantle and Elston Howard, then a pop up from Moose Skowron was dropped by Bill Mazeroski, allowing the second run to score, unearned of course. Clete Boyer made it 3-0 with a single before Veale could close out the first inning.

Stuart’s defense came into play again in the third inning. He booted another grounder by Maris, who moved up to second base on a long out from Mantle, then scored when an Elston Howard double got by Stuart on what sounds like it was a play he should have made.

The Pirates opened up their scoring in the third inning when Clemente doubled, then was brought in by a Virdon single, making it 4-1 through three innings.

Pittsburgh made it 4-2 in the sixth, as Clendenon replaced Clemente mid-game and singled. He moved to third base on a Mazeroski double, then scored on a ground out.

Veale settled down after three unearned runs were scored early against him and he actually went the distance in this game, at least on the mound. Veteran infielder Johnny Logan hit for him in the ninth inning with his team down 4-2 and hit a long drive over the wall for the final run in a 4-3 loss. 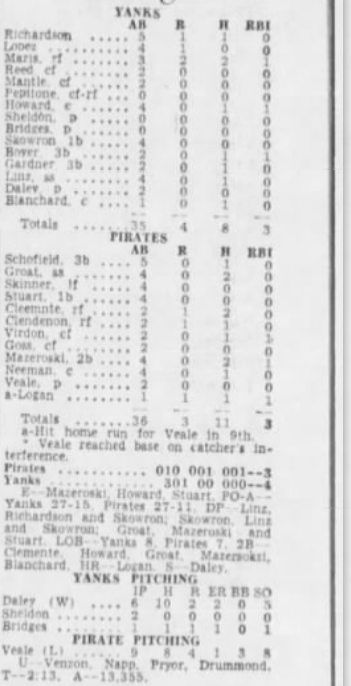 There were a few reasons why I decided to write-up this game despite the Pirates losing, which doesn’t happen often in Game Rewind articles. The significance of the two teams at the time was one. Veale pitching a complete game was another. His next game actually came three days later and he pitched five no-hit innings in relief. The home run derby was another reason to look at this game.

The final one was what happened just before the game started. Someone placed a large rock at shortstop, in a tribute to the rock that sent a grounder off in another direction in the eighth inning of of game seven of the 1960 World Series. That would be funnier to do 1 1/2 years later if the ball didn’t hit Tony Kubek in the throat and knock him out of the game. Seems like something you wouldn’t do in front of Kubek himself, who didn’t play, but he was there. Here’s the kicker though. The Pittsburgh papers didn’t pick up on it, but the New York papers noted that it was shortstop Phil Linz who placed the large rock there. He own teammates were the ones who could poke fun at the incident. I guess winning the 1961 World Series helped ease some pain.