Today’s Pittsburgh Pirates Card of the Day comes from the 2011 Bowman Platinum set. It features relief pitcher Evan Meek, who pitched for the 2008-12 Pirates. He turns 39 years old today. He was an All-Star in 2010, so his stock was at a high point when these cards were being produced and released during the early parts of the 2011 season. This is the first time for Meek in this series, and it’s also the first time that we are looking at a 2011 Bowman product. This is a special card from that set, limited to 25 copies. It’s not only autographed by Meek, it also includes a piece of a game used uniform. Let’s get right into the card. 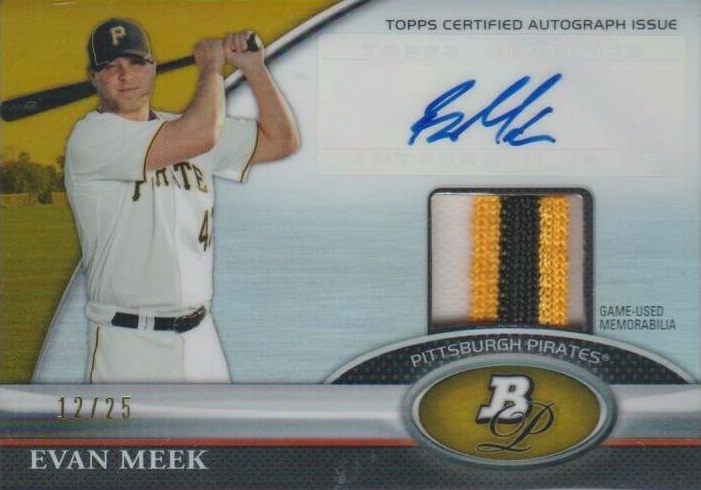 With a brand new player in this series, I have all of his cards with the Pirates to choose from for my Card of the Day subject. This one was a tough one to pass on. It wasn’t just the autograph and the jersey that caught my eye, it’s also the fact that a relief pitcher is swinging a bat on his card. Meek was actually an amazing hitter. He finished his big league career with a 1.000 batting average! Some of you will say something like “What did he do, go 1-for-1?”. Why can’t you just celebrate perfection at the plate and not worry about the details?

There are other versions of this card, but this gold one looks best because the colors go well with the Pirates uniforms. However, the piece of uniform makes this even more desirable. There are 17 other Meek cards from this set (different variations/print numbers) and all 17 have just white jerseys, nothing else. Looking at the uniform from then pictured on the card, it’s not hard to see how a majority of the game used pieces would be all white. It’s a tiny piece on the card and it came from a big uniform.

In the bottom, you’ll notice this is a Christmas card. This is #12 of the 25 copies that they produced. You’ll also notice that Meek wrote BMe on the card in the autograph spot. A nice message of encouragement for young kids who want a baseball role model. 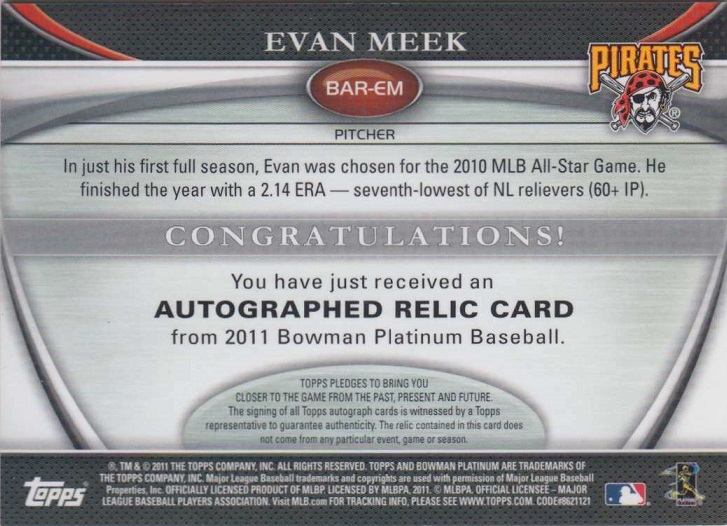 I was originally writing “jersey” piece when I was doing this article, and I’ve probably done that in the past for a similar card, but this card (front and back) does not specifically say jersey. A lot of people list it that way though, so keep that in mind if you want one. They call it a “relic” on the back and the front just says game used, so it probably includes pants pieces on some cards. The back here just tells you that you got something cool and Upper Deck is congratulation you for receiving it, which is nice of them. Some backs for game used/auto cards don’t even give you those two lines of bio info, so that’s a nice little added bonus. Also, obviously I appreciate the Pirates logo being included on the back. The card “number”/identifier here is BAR-EM, which stands for Bowman Auto Relic – Evan Meek.

If you want this card, the copy you see above is the only option on Ebay right now. That’s especially true if you want the better uniform patch piece and the gold version. It’s going for $16.50 delivered. If you want the same looking card (photo/auto/game piece), but don’t want to spend that much, you have the other 17 options I mentioned. There are green and blue versions that are numbered copies in low numbers (99 and 199), and a refractor version that has 1,166 copies made. All three of those can be found between $5 and $15 each. One of the green ones might be the best deal on Ebay for this card. It’s $5.09 delivered, but it has a best offer option, so you can get it for less. Two copies of these cards have sold in the last three months on Ebay, one for $5 and the other for $6.