Today’s Pittsburgh Pirates Card of the Day features a Hall of Famer and someone who will likely end up in the Pittsburgh Pirates Hall of Fame, whenever they start putting people into that, which has been planned for quite some time. Joe Sewell is legendary for being almost impossible to strike out. Back when guys didn’t swing for the fences on every single pitch like cavemen, players used to try to put the ball in play (crazy concept, isn’t it?). They swung bigger barrel bats, choked up, took shorter swings, and kept their eye on the ball. No one was better than that than Joe Sewell. He struck out 114 times in 8,333 plate appearances. In 2021, 94 players struck out more than 114 times.

Rip Sewell debuted with the Pirates just before his 31st birthday. He failed to pick up a win that first year in 1938. From 1939 through 1949, he went 143-96 for the Pirates, at one point putting together back-to-back 21-win seasons. He ranks seventh in Pirates history in wins, seventh in innings, and tenth in games started, complete games and shutouts. Joe Sewell and Rip Sewell were cousins. That alone makes them a great baseball family, but Joe’s brothers Tommy and Luke also played in the majors. Luke definitely gets overshadowed by Joe and Rip, but he was a very good player in his own right. He played 20 seasons in the majors, made an All-Star team and received MVP votes in four seasons. Tommy had one career at-bat with the 1927 Chicago Cubs at 21 years old, then played out his career in the minors.

In 2011, Upper Deck decided to include the two more famous Sewells on one card. A card with the four of them would have been quite amazing, but Tommy Sewell is a very tough (and valuable) autograph because of his short career and the fact that he passed away in 1956. While his autograph is highly desirable to a small group of collectors, Joe and Rip have a higher appeal, combined with a lot signed autographs out there. While they both passed away over 30 years ago, each lived a long life and signed a lot of autographs in their day. That led to Upper Deck coming up with an idea with a family tie, including a dual autograph card in their SP Legendary Cuts series featuring Joe Sewell and Pirates pitcher Rip Sewell. 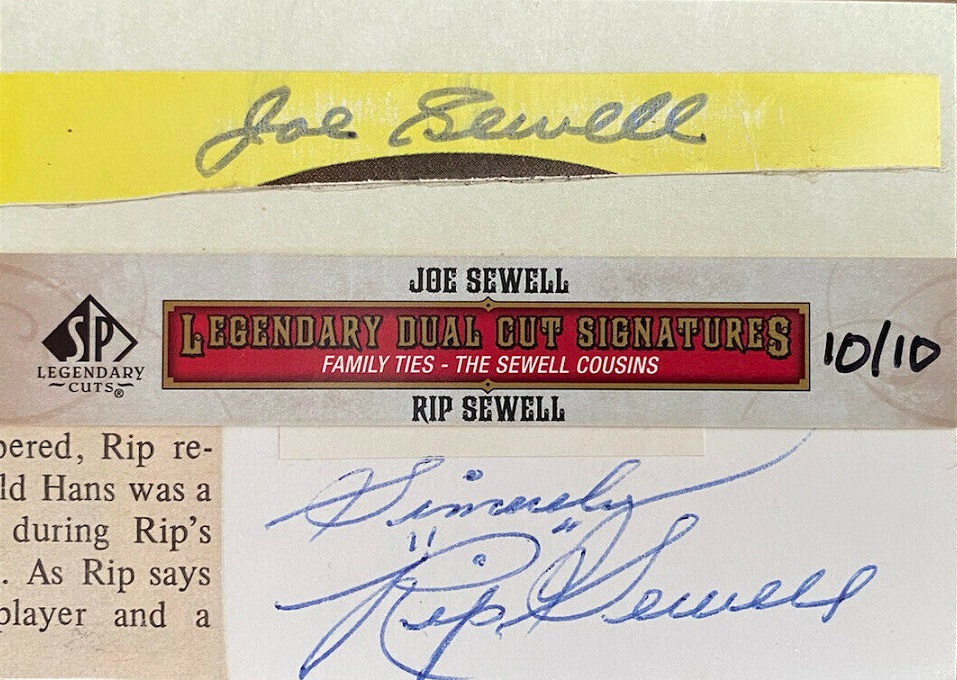 I’ll start by saying that the concept of this card is a great idea, but this really has an amateur hour feel to it, like something I could create and then say to myself that it sounded and looked a lot better in my head. There’s a piece of tape on the Rip autograph, you can see glue residue on the Joe autograph, which was poorly trimmed from the top of a Hall of Fame plaque postcard. Why is there part of a newspaper article on the side? I actually might be underselling my abilities to create by comparing myself to this card, because if I decided to cut up original autographs, I’d be sure I knew what I was doing first.

What I can say positive here is that both of them have nice autographs, especially compared to the toddler scribble that 97.6% of modern players try to pass off as “autographs”. The “10/10” tells you that they made ten versions of this card and this is #10 in that series. Seeing as the autographs were both done more than 20 years before these cards were released, the other nine versions will all look a bit different. 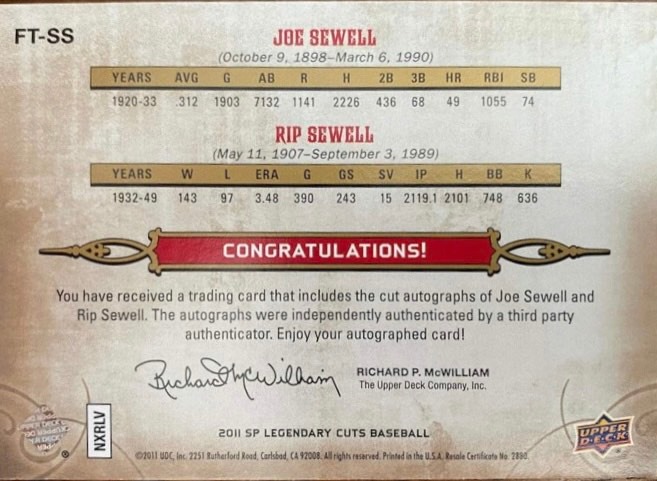 I like the look of the back of the card much better than the front, it has an old school feel to it. It’s nice that they included the career stats for each player. What would have been even nicer, and could have appeared on the front as well, is photos of the two players. That definitely would have helped the overall appeal of this card. As I said, I really like the idea here, just not the presentation.

If you’re interested in this card, it can be found on Ebay for $134.99, with a best offer option. There are similar cards with just Rip Sewell’s autograph, including two versions that had 15 copies released and another that had 39 copies. There’s also a tougher to find one with only five copies available. Today’s Card of the Day is the cheapest one out of the buy it now listings, while the straight auction for one of the 15 copies version will be done before this article is posted. I actually threw in a bid on that just to see where it will end. I have a feeling it won’t be reaching the $100 mark.