Today’s article is another two-for-one special. This is the first time featuring Pittsburgh Pirates outfielder Tony Alvarez in this series. It’s also the first time taking a look at the 2003 Fleer Platinum set. This set uses an old Fleer design, so it might look like a familiar card at first glance. Alvarez was a prospect for the Pirates leading up to his big league debut in 2002, when he batted .308 in 14 games as a September call-up at 23 years old. That ended up being his peak, though he put up some solid stats at Triple-A during the 2003-04 seasons, which only led to him playing 24 more big league games. This was a desirable card at the time it was released because he was a legit prospect, and coming off of his solid September 2002 performance. So let’s take a look at card #227 from the 2003 Fleer Platinum set, featuring Tony Alvarez. 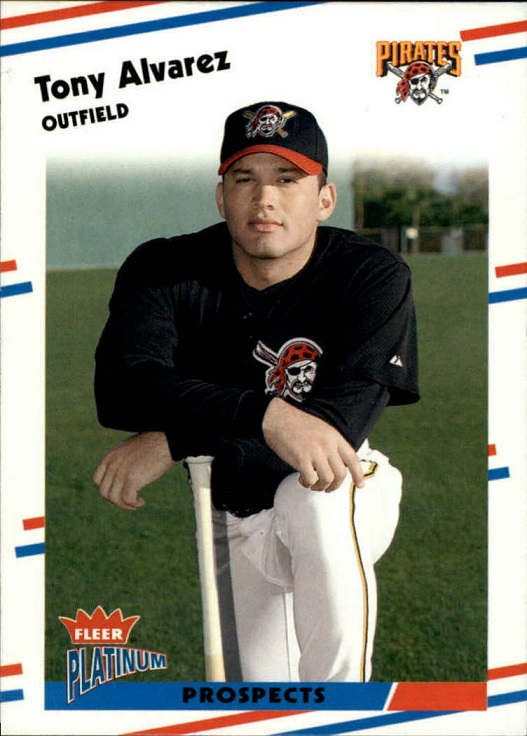 You might recognize this as the 1988 Fleer design. They were celebrating the 15th anniversary of that set with this design. The borders are exactly the same, the look of the player name/position in the top left (even spelling it outfield instead of outfielder) is the same. They also included the Pirates logo in the same spot. I do like the 1988 logo better, but I still really like the one you see above too, so no big deal. I hate when newer sets use an old design and then use the yawn-inducing current logo. I know they have to…but do they?

One slight difference besides the obvious Fleer Platinum logo is the line at the bottom of the photo. They used Pirates colors on all of the Pirates cards in that section. The bar where it says “prospects” was the gold and the red section above was black. That would have been a nice touch, but I like the throwback design being used, and they borrowed enough of it to keep the same overall look close enough.

As a side note, I was not a huge fan of the Pirates adding red to the jerseys, other than the bandana of course, but these hats still looked decent (2 1/2 stars out of four). They weren’t the worst from that time, that’s for sure. 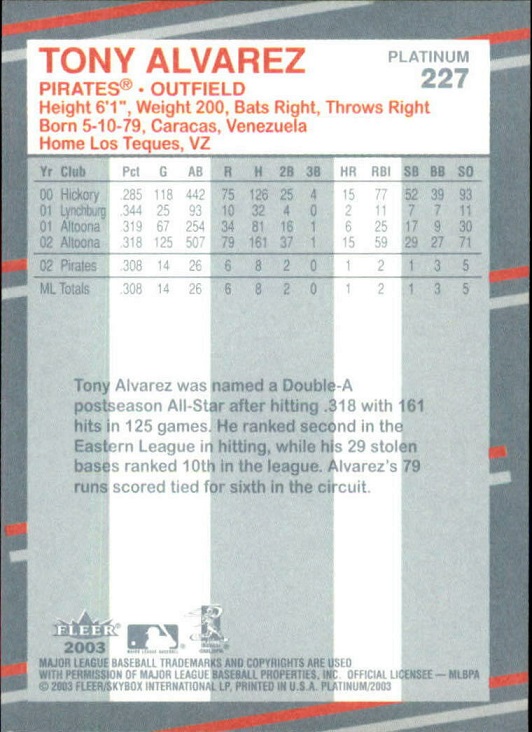 The back of these cards are just like the 1988 Fleer cards in design, which is nice when throwback designs keep so much of the original look. You can see in the stats here why Alvarez was considered to be a prospect. He hit for average, hit for power, stole a lot of bases, and he did it at a decent age for the level. Then he had that nice debut in the majors. He was still 23 years old on Opening Day in 2003 and ended up hitting .298 with 22 steals and an .830 OPS in 106 games for Triple-A Nashville of the Pacific Coast League that season, yet he never joined the Pirates that year. He had a little trouble with the team that resulted in a suspension, and he missed time due to injury, but he was clearly playing well for a majority of the year. He had an extremely similar year in Nashville in 2004, and the Pirates gave him another shot, but that amounted to just 45 plate appearances in 24 games, so it wasn’t much of a shot. If you didn’t live through that time period, then try to remember how the Pirates mishandled Alen Hanson a few years back and you’ll get the Alvarez picture. Only difference is Hanson got to play plenty in the majors after he left Pittsburgh and Alvarez didn’t.

There aren’t many options available for this card on Ebay, which is a bit surprising because it’s not that old. You would expect it to be a $2 card delivered, but of the five currently listed on Ebay, all of them have extra charges for shipping, so you can’t get it for under $4. I know, that’s not a lot of money in general, especially if you want something, but this is the type of card that you should be able to get for $2.