It feels like it was just yesterday that I was talking about how I loved the design of the 1912 C46 set and the front design of the 1940 Play Ball set reminded me a little of that card. When I brought that up at least 24 hours ago, I mentioned that there are no Pittsburgh Pirates in the set because it only included minor league players. I recall that I said I could stretch the definition of a Pirates card if I featured a player in the set who played for the Pirates. This all sounds vaguely familiar to me, so I decided to stretch a definition today with a look at the card of Hall of Famer Joe Kelley from the 1912 C46 set.

If Joe Kelley doesn’t sound like a familiar name to you then you’re not a loyal reader, but I truly appreciate you becoming part of that growing group. He played for the 1892 Pirates for three months before they traded him to the Baltimore Orioles for George “Bad Luck” Van Haltren. I just gave him that nickname because the Alleghenys/Pirates had so much bad luck with Van Haltren it is mind-numbing to read through the list.

The quick summary is that Pittsburgh signed Van Haltren as a minor leaguer in 1887 and then traded him for veteran pitcher Jim McCormick, who went 10-23 in his only season in Pittsburgh, then retired. Van Haltren became an All-Star type player in Chicago. One bad trade. The trade for Kelley was a disaster. They gave up a 20-year-old future Hall of Famer for 137 games of Van Haltren. Two bad trades. The Pirates then sold Van Haltren to the New York Giants for $2,500, and then he played another ten seasons in the majors, putting up 25.1 WAR, with a severe leg injury limiting him to 0.0 WAR in his last two seasons combined. So he was basically a 3+ WAR player for eight years for $2,500. Three very bad trades, one player. If they just kept Van Haltren (or Kelley) he would be known as one of the team’s great players. He would also be the team’s leader in runs scored by a nice margin over Honus Wagner. 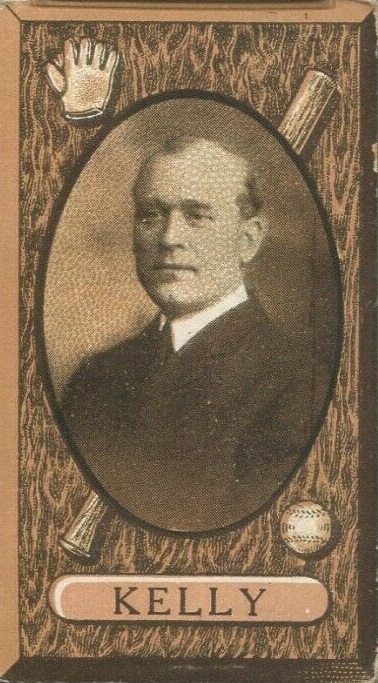 All of the cards in the 90-card C46 set contain portrait style photos like you see above. Kelley was a manager at the time, so he was in a suit. The players are in uniform, but similar looks to what you see here. I just love the design of this set, with the picture frame as a border, looking like a photo on a plaque, as well as the baseball, bat and glove in the photo. The name (which is obviously spelled wrong here) is in a little hot dog at the bottom. It’s such a great old school look that I don’t mind the back being a little bland… 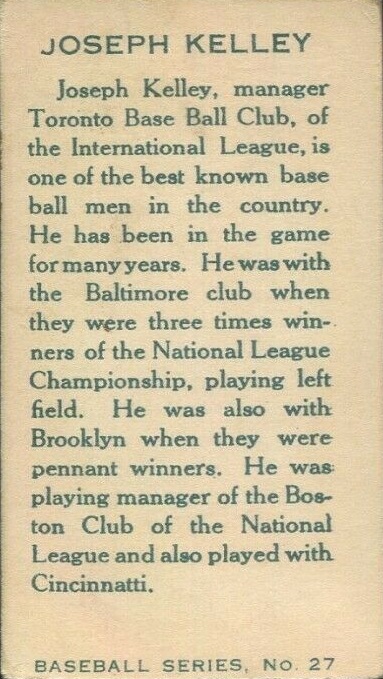 The spelling error on the front is a little odd considering that they got it correct twice on the back. As I said, the back is a bit plain. Cards from this era usually had some kind of advertisement on them for a candy or tobacco company in most cases. This is just no frills, bluish-green writing on the back with a misspelling of Cincinnati and no mention that he played for the Pirates. Notice there are no team names mentioned and that’s not that odd for that era because team names as we know them know were just nicknames, not official.

I should have mentioned how tough these cards are to find before I hooked you into wanting one of these cards. Most collectors on a budget won’t be getting a card from this set. I have one, which I bought as a type card years ago, but I thought about trying to collect the set. It’s not that expensive overall because it’s 90 cards and there are only three cards that get high prices, Kelley, Hall of Fame pitcher Joe McGinnity, and 1919 Black Sox player Chick Gandil. There are two Kelley cards on Ebay right now. One is a PSA 4 for $399, and the other is a PSA 1 for $225 or best offer. The scan above was taken from the more expensive one.