Today’s Pittsburgh Pirates Card of the Day features a player who was traded on this date in 1940, right around the same time that people were collecting and trading his brand new 1940 Play Ball baseball card. Johnny Rizzo had quite a wild ride with the Pirates. His 1938 rookie season is one of the best rookie years in team history. He set a club record that year with 23 homers, to go along with a .301 average, 111 RBIs and a sixth place finish in the MVP race. The next year he played just 94 games and saw a 130 point drop in his OPS. Just weeks into the 1940 season, he was gone. The Pirates moved on from him at the right time, picking up Vince DiMaggio in a deal that worked out great for them. Rizzo left his mark on team history though, and today we check out his 1940 Play Ball card, one of just two options available for him while with the Pirates. 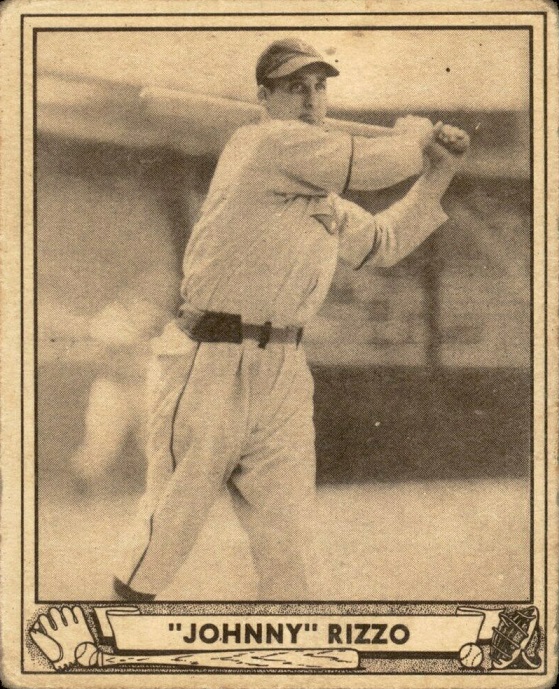 I had to pick between the 1939 and 1940 Play Ball sets for Rizzo. There weren’t many sets produced during this era (and almost nothing during WWII), so these are two sets that we have used often already. Not only do I like the 1940 Play Ball design better between the two sets, Rizzo also has a better pose in this set. The swing follow-through is a very popular pose for baseball cards from the early years and we saw it a lot in later years with Topps as well before they started taking more game action photos.

I’m a big fan of the design here because it reminds me of another older set that uses a bat, ball and glove in the design. The 1912 C46 set is one of my favorites, but it was a set produced in Canada for minor league teams, so there are no Pirates cards. I might stretch the definition and include a former Pirates player pictured in the set just so I can show off one of my favorites. On the flip side, the 1939 Play Ball set just has a small white border around the photo and nothing else on front, so you can see why the 1940 set wins out. 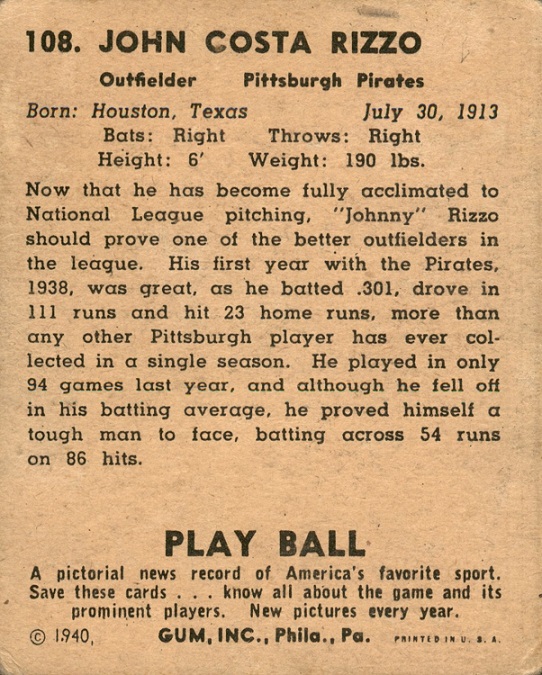 The back gives a summary of Rizzo’s brief big league career, similar to what I already wrote before. They predicted big things for him in 1940, and they were right in a sense that he hit .283 in 143 games, with 19 doubles, 24 homers, 72 RBIs, 56 walks and an .828 OPS. That was definitely a strong season, but most of it was spent with the Philadelphia Phillies. He dropped off big time over the next two years, posting an OPS of .618 in 1941 and .630 in 1942. Then he served in WWII, before finishing out his career in the minors, where he put up solid stats for five years, though by the end he was four levels from the majors. He played a total of 414 Major League games after his big rookie season.

If you’re interested in this card, there are eight options on Ebay right now, not including a straight auction listing that will be over before you see this article. There’s are also two reprints available if the original is out of your collecting budget. The eight auctions start at $18 delivered for a lower grade copy, and they work their way up to $109 for a PSA 5.5. I’ll note that a PSA 5, which could easily be just as nice as the 5.5, is going for $80 or best offer. In the last three months, eight copies have sold, going as low as $15, while the most expensive was a high grade (ungraded) copy that went for $47.