In about 99.5% of these Card of the Day articles, the player we feature is pictured on the Pittsburgh Pirates. Almost all of the outliers come from players who didn’t have any cards while with the Pirates, but they appear on a card in one (or more) of the Zee-Nut sets. Zee-Nut was a candy company in San Francisco, which released sets each year from 1911 through 1938 featuring players in the Pacific Coast League. Today’s card is from the 1931 set, and it depicts Dave Barbee, outfielder for the 1932 Pirates. We have looked at the 1931 set once before when I covered Jimmy Zinn, Pirates pitcher during the 1920-22 seasons, who didn’t have any cards available from that time in the majors. Here’s our second look at the set, and it’s another player without big league options for his card choice. 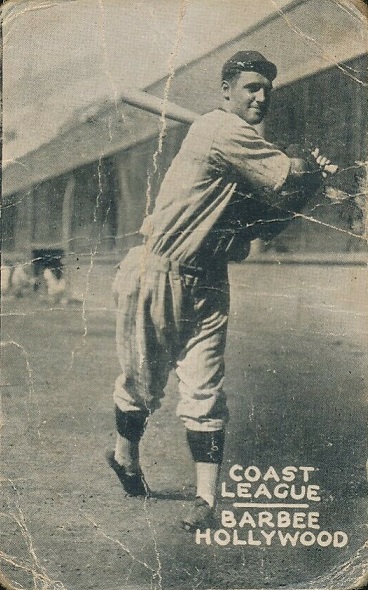 The Zee-Nut cards are rather simple in look for almost every year that they put out sets. This particular one feels more like a postcard with the blank back, no borders, and just the minimum information that lets you know his last name, the team he played for (Hollywood) and a partial league name. What they really excelled at was getting great photos of players, and some of them have turned out to be very valuable over the years.

The set has the rookie* cards for some big name players who started their pro career in the league (*some collectors label them as pre-rookies and their first big league card is the rookie). Zee-Nut also has a ton of players who had brief big league careers and only appeared in this set. I only picked this particular Barbee card because the other two options on Ebay didn’t have great scans, but I mention them in the price section below. All three of the Barbee cards have staged action photos of him in a follow-through swing. He played 97 games for the 1932 Pirates, hitting .257 with 33 extra-base hits and 55 RBIs. He only other big league action was 19 games for the 1926 Philadelphia A’s.

What you don’t see here that was originally on this card is a coupon that was at the bottom of the card. The coupons were “good for valuable premiums” and the retailers selling the Zee-Nut product had a list of those items. The coupon in 1931 had an April 1, 1932 expiration date. Even though the coupons were attached to the cards, they were meant to be removed, so cards without them still hold value. That’s mostly because it’s much easier to find them without the coupon. They can also still be graded (and given a number grade instead of authentic), as long as the person who cut the card, didn’t take too much of the photo off. There is a minimum height requirement for grading the card.

If you’re interested in this card of Barbee, you only have one option currently on Ebay (the scan above) and the price is $28.49. There’s also a 1929 card in slightly worse shape for $17 delivered, as well as a 1930 card in better shape for $34.99 or best offer. All three of the cards have the same pose/different backgrounds, and the front design is basically the same as well, so if you like the 1931 shown above, you’ll like either of the other two as well. All three prices seem reasonable to me, though they would likely end at a lower price in a straight auction. The problem is that there are no completed auctions of Barbee from any set in the last three months, so you could be waiting. Zee-Nut cards are not easy to find because they were only released on the west coast, so they were not being mass produced for the country.