Today’s Card of the Day comes from a player appearing in this series for the first time, and he won’t be a regular here. That’s because Pittsburgh Pirates pitcher Bob Chesnes had two cards to choose from for today’s article. His entire career spanned three seasons in Pittsburgh (1948-50) so he didn’t have a chance to appear in many sets. I could have used his 1949 Bowman card, but I went with the 1950 set instead. The deciding factor was set usage. The 1949 Bowman set has been featured here three times already. This is now the third time for the 1950 set. Let’s get right into the card. 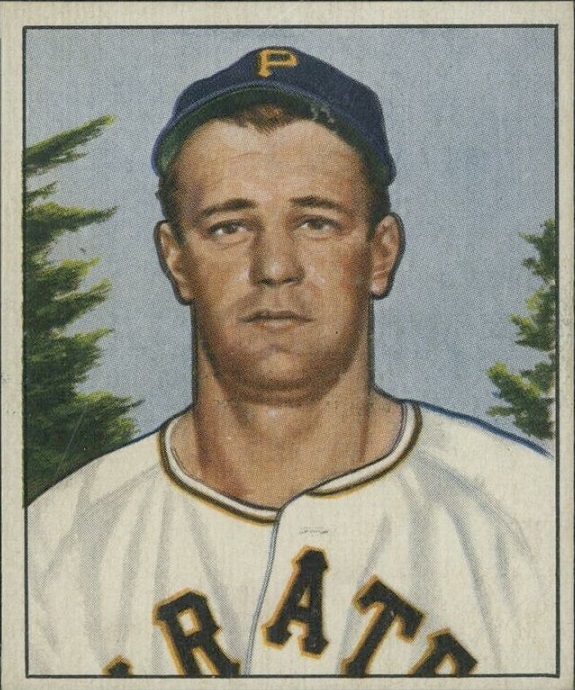 This is the no frills Bowman design. You get absolutely nothing here as far as effort put into the layout. White borders? Check. Black frame for art/photo? Check. We’re good. Do we need a name on front, maybe position, team name, team logo, facsimile autograph, something that says Bowman? Nope, just white border, black frame.

Something to remember here is that Bowman was the only big game in town. Topps had a slow roll out in 1951, then kicked down doors with the 1952 set. In 1950, you had Bowman. The player artwork based on real photos was good enough when you don’t have any competition, and these cards have stood the test of time. There’s still a group of collectors who are big fans of the early Bowman sets. Let’s face it, if you’re a collector on a budget, you can still finish this 1950 set. It’s the 1951 set with Mickey Mantle and Willie Mays rookies that presents a problem for budget collectors, but this one is doable. When you lay out a whole set, with colorful artwork similar to what you see here for Chesnes, it’s a very nice looking set. 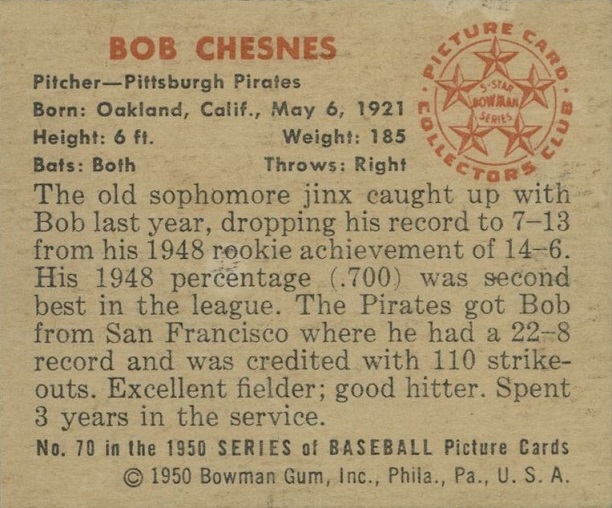 The front didn’t need all of that fancy stuff because most of it shows up on the back. That’s pitcher Bob Chesnes from the Pittsburgh Pirates. He’s card #70 in the 1950 series (252 cards that year). Maybe you noticed that the size of these two scans don’t match up. That’s because the backs were printed sideways. If you stood the card up so the front looks normal, then put the card on its left side, the back would then be facing the way you see in the scan above. If you didn’t know already, that logo tells you that this is the “5-Star Bowman Series: Picture Card Collectors Club”, whatever that all means.

What’s interesting in the bio here is that they quote win-loss records without anything else, so it makes you wonder if it could be misleading. After all, the Pirates were surprising good in 1948, finishing 83-71, after going 62-92 during the previous year. You might know that the early 1950s are basically the ugliest time in franchise history. That descent into despair began after the out-of-place 1948 season, as the Pirates went 71-83 in 1949. So maybe his record was caused by playing for a worse team? That’s usually a good guess, but Chesnes was actually much worse in 1949, so it’s more like he was partly responsible for the team slipping after one year. He had a 3.57 ERA in 194.1 innings in 1948, and a 5.88 ERA in 145.1 innings in 1949, and that’s how your record goes from 14-6 to 7-13 in one year.

This card is readily available on Ebay, with 87 current auctions (as a side note, the 1949 Chesnes card had 30 options). You can get it anywhere from a low grade/ungraded to a PSA 8. You’ll probably want a mid-grade, which can be had for around $15, maybe a little higher if you want an ungraded EXCELLENT condition (PSA 5 equal) card. There are three graded PSA 5 copies in the $25-$30 range, and a PSA 6 is $33. There have been 11 sold copies in the last three months, which means some people have been holding on to their copy for quite some time, so if you see someone with a best offer option, don’t be afraid to use it.