Card of the Day: 1972 Topps In Action Jose Pagan

Today’s Card of the Day comes from a great subset of the 1972 Topps set. That year they took photos of players during the game and called them In Action cards. They were in addition to the regular card of each player. The Pittsburgh Pirates were represented in that subset by Roberto Clemente, Willie Stargell, Bob Robertson, Dock Ellis and today’s featured player, Jose Pagan. This is the second time appearing in this series for Pagan, who was born on this date in 1935. We took a look at his 1971 Topps card one year ago today.

Pagan’s 1972 In Action card isn’t just part of a special subset, it was also released in the sixth (and final) series. Referred to as high numbered cards, they were issued during the season and they were put out in much smaller numbers than the other cards in the set, making them tougher to find now, as you will see in the pricing section below. Here’s a look at card #702 from the 1972 Topps set, featuring Jose Pagan In Action. 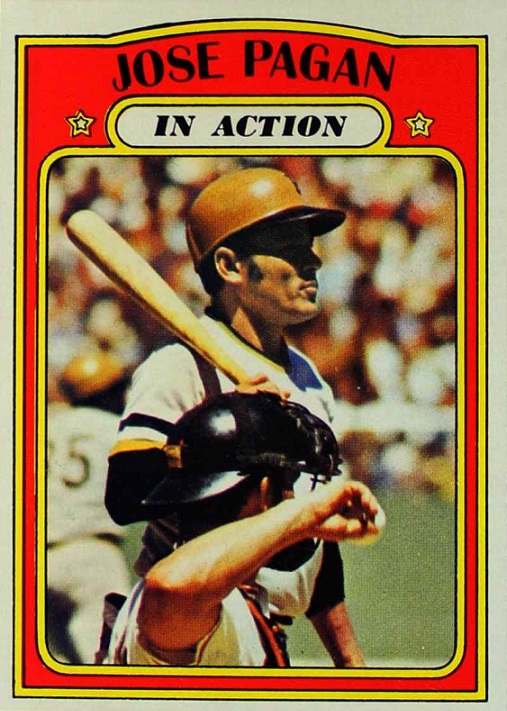 Man, that’s a bright card. I probably should have warned you ahead of time. Someone had a great scan of this card and the colors really popped. It’s funny that they called this an In Action card when he clearly isn’t in action right then. Before this subset, Topps mostly had staged action photos taken prior to games, but the cards in this subset were all taken during games. That opened things up for Topps to use action photos during on regular cards in 1973, which they did for numerous players in the set. Basically, the In Action cards became normal cards. You sacrificed some photo quality for the game shots, but it’s still a great subset.

I’ll note that all of the In Action cards have those same red/yellow border colors, while different teams had different colors in the set. All of the Pirates cards had a blue frame around the photo, with orange in the team name at the top. I’ll note that the colors weren’t consistent on the cards, so the frame was different shades of blue and some of the orange in the letters has more of a yellow look. 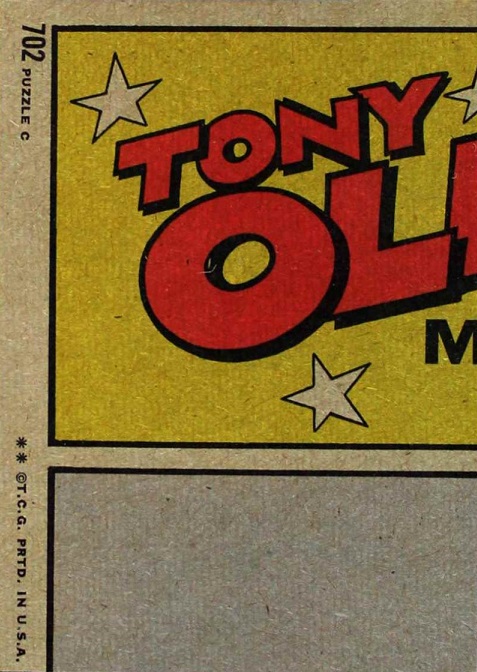 The back would be very odd to see if you didn’t already know that the In Action cards all had pieces of a puzzle on the back and you need all of them to see the puzzle. There were four different puzzles featuring Carl Yazstremski, Tom Seaver, Joe Torre and Tony Oliva. This back was the upper left-hand corner of the Oliva puzzle. All four of those players are now in the Hall of Fame with Oliva entering this year. Torre was a fringe candidate as a player, but he made it in as a manager.

I mentioned up top that this card is difficult to find, and part of that is because it is on the want list of many collectors. Usually when it gets listed, it sells quickly, with the exception being cards that are overpriced.  Just 11 auctions are active for this card right now and they range from $20 to $174, with the expensive one being a PSA 8. We don’t often see cards with more closed auctions than active, but high numbered cards are usually the exception. There are over 50 closed auctions, with the lowest sale being $6 and the highest being $38. One hint if you are looking for this card or any other In Action cards. Search by “IA” in the title, in addition to “In Action”. More people list them as IA, but not everyone does, so you don’t want to miss a potential deal by limiting your search.