In 1989, Topps brought the Bowman name back for a mid-season set they released consisting of 484 cards. The set used a similar design to the 1953 Bowman set, which isn’t saying much considering that’s one of the most boring set designs ever, as you will see in the comparison description below.

The cards in this set had a slightly odd numbering system. They grouped them into teams, starting with the American League and the Baltimore Orioles, then went in order by the city names through the entire AL, followed by a small subset of father-son cards, then the National League teams in order by city name. That’s a fine system, but then once you got into the individual teams, they grouped them (in order) by pitchers, catchers, infielders and outfielders, with no alphabetical order used. The Pittsburgh Pirates team set starts with card #409, which is Bob Walk. There are 18 cards total and it ends with #426, which is Barry Bonds.

Today we are looking at card #418, featuring infielder Ken Oberkfell, who turns 66 years old today. He played for the 1988-89 Pirates, though he played just 34 games total with Pittsburgh. He was acquired late in 1988 to help with the playoff push, then got dealt early in 1989. He was a solid player during his 16-year career in the majors, providing above average defense at third base, along with a nice OBP throughout his career. That led to a final total of 22.4 WAR. Here’s a look at his 1989 Bowman card. 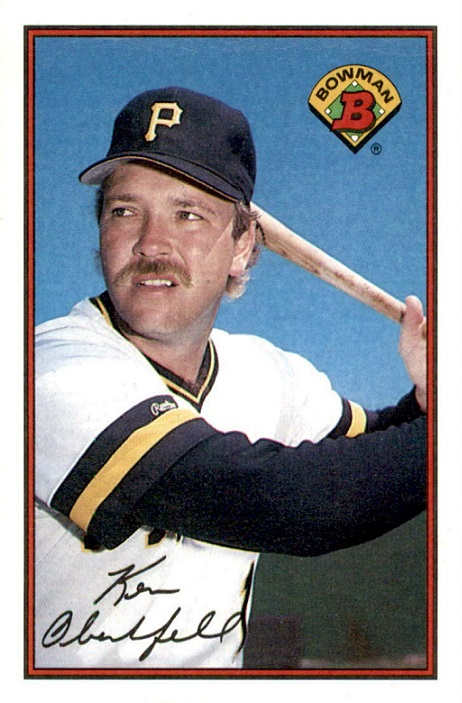 The 1953 Bowman design was a black box for the photo and white borders. Whoever came up with that design really put a lot of thought into it. As I said, this set borrowed that design idea, but they improved on it enough that is didn’t make you yawn while opening a pack. They added a red border inside the black border for the photo. They added the Bowman symbol to the front, and there’s a facsimile autograph in the bottom left. I like the 1953 Bowman set for the great old photos, but this set design has a much better look in my opinion, even though they didn’t use the team logos on either side of the card. As a side note, Oberkfell really doesn’t look sure about taking this photo. 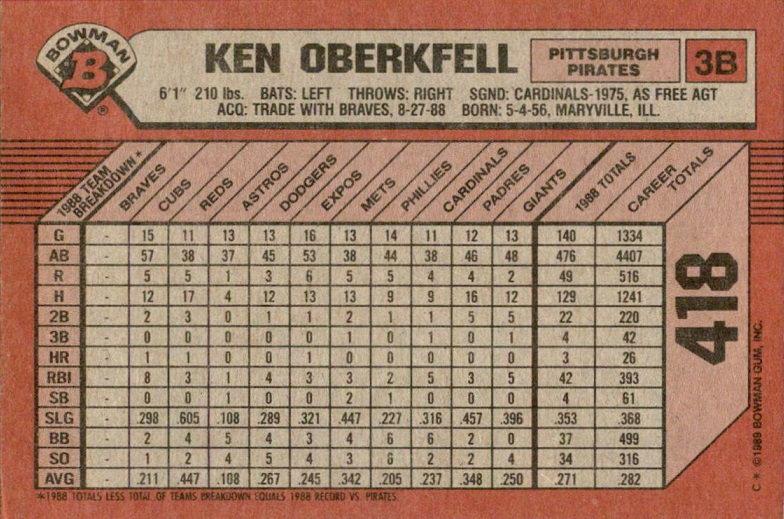 The back added a new feature not on any other cards, giving you the team-by-team breakdown of his 1988 season, which has one flaw in that idea. There were 12 National League teams at this time and they set up the back to accommodate 11 teams. Since Oberkfell was traded mid-season, they didn’t include his records against the Pirates. He didn’t play the Atlanta Braves that year (that’s where the Pirates got him from), so they could have just switched that to Pirates so we get all of his stats. I didn’t look, but I’m guessing that someone who switched leagues mid-season would prove to be quite a problem with this type of setup.

While the front borrow the design of the 1953 Bowman set, the back was nothing like the original cards, though they did include the gray/red colors and black writing you see here. Those cards had a small bio section for player notes, followed by one year of stats and then lifetime stats at the bottom. The 1953 set didn’t have doubles, triples, stolen bases, slugging, walks or strikeouts, but they did include four categories of fielding stats.

If you’re interested in the card, you’ll be happy to know that it can be found under $2 delivered. There are 43 auctions for this card and the most expensive is $5.98 because of a seller who charges $4.99 to deliver solo cards. That’s why I often mention to watch shipping charges. There are no special cards to speak of for this Oberkfell card, none are graded or autographed, so basically you just need to watch shipping charges and happy collecting.

4 May 2022
Card of the Day
Featured, Ken Oberkfell