It has been a long time since the 1969 Topps set appeared in this almost daily feature. Considering that we started this series in mid-March of 2020, you would think that a large set from a major manufacturer would appear here at least once over the last 19 months. There are instances where the only Pirates card for a player comes from this set, so the set gets used by default if we want to feature that player (eventually we want to get everyone possible featured here). One of those instances is today’s Card of the Day.

Catcher Chris Cannizzaro was acquired in a trade by the Pirates after the 1967 season, and he was traded by the Pirates just prior to the 1969 season, when people were getting these cards in packs. He was in the minors during the 196-67 seasons, so he doesn’t appear in the 1968 set. Even if he did, it would have been too late to get him on the Pirates in that set, unless they waited until the final 1-2 series before releasing his card. He wasn’t playing regularly early in the 1968 season, so including him seemed very unlikely. This particular card from 1969  is not one of the better effort by Topps, as you will see below, but it’s the only choice for him. Here’s a look at card #131 from the 1969 Topps set, featuring Chris Cannizzaro. 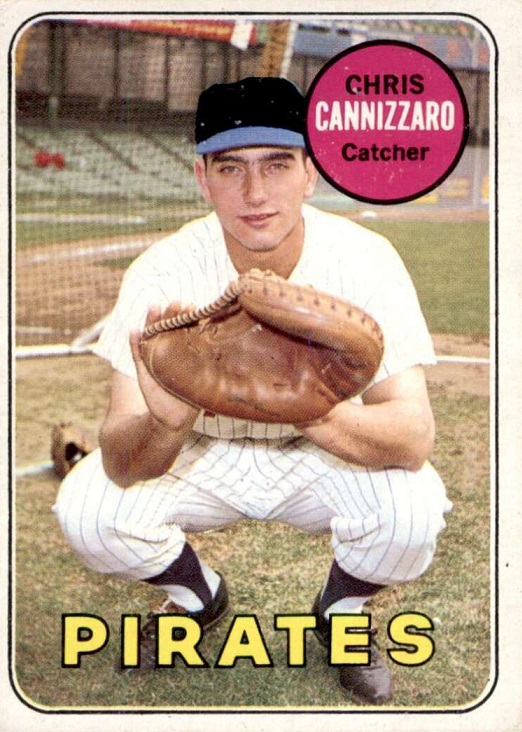 When Topps didn’t have a photo of a player with their new team, they did one of two things 99% of the time. Either they had a closeup of the player not wearing a cap, and cropped it so you didn’t see anything from his old team’s jersey. The other option was airbrushing the old jersey to look like the new team. On rare occasions, they just phoned it in and you get what you see above. Clearly those aren’t the pinstriped version of a Pirates jersey/pants. In fact, the glove is blocking 98.3% of the team name on the jersey, but look by his right wrist and you will see some of the name on front. Look at the job they did with the hat. It looks like someone did that after they got the card. Not only did they not care about the brim of the cap, they didn’t even get in the entire front of the cap. You can see some spots that match the brim, as well as an outline of the blue hat. They didn’t get a photo of him during the 1968 season in Pittsburgh, so they used one of their old photos and did a hack job trying to convince you this was a Pirates card.

One of the reasons I don’t care much for the 1965 Topps set is that they used pink borders for all of the Pirates players. For some unknown reason, that color pops up again in the circle for the player name/position here. You might think that Topps used Pirates colors for the team name at the bottom on purpose, but all of the cards in the set had yellow writing with black borders for the team name. 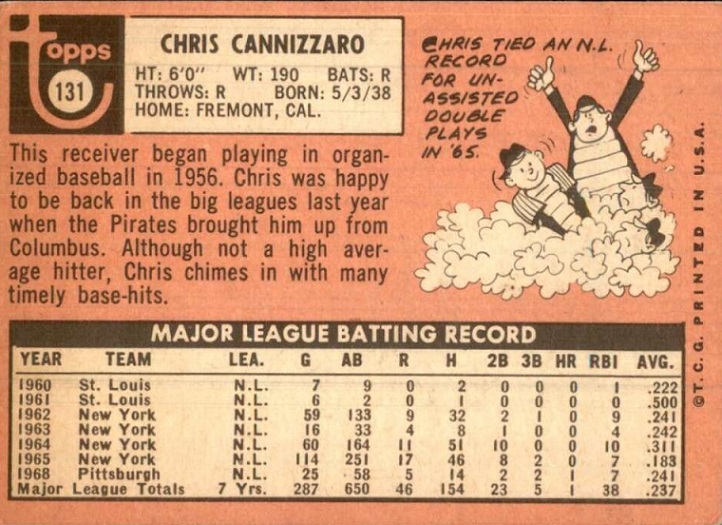 You have to love the artists for Topps. Let’s have a scene where two players slide into home plate at the same time, Cannizzaro tags them out and the ump calls both out. Can I use the same exact drawing for all four of them to save time? This sounds like a job for Generic Gray Topps Man!

I like how the back thought it was important to tell you that he was happy to be in the majors again, because I was really wondering if he was having a blast in the minors, then got forced into a higher wage for a better job, and how that would affect his emotions. In case you didn’t read about Cannizzaro this morning in the This Date in Pittsburgh Pirates History article, there’s a happy ending to his story. Playing 25 games all year after not being in the majors, could seem like it would be the end for a 30-year-old catcher, but going to an expansion team in 1969 (San Diego Padres) really helped his career have a second life. He was an All-Star in 1969 and remained in the big leagues through the 1974 season.

This card is a common card and it is easily found because older sets from the 1960s are very popular on Ebay. That keeps the prices down, despite the set being 53 years old. There are 117 options for this card at the time of this writing, led by a PSA 9 that is going for $109. The next most expensive is also a PSA 9 and it’s going for $74, with a best offer option. A PSA 8 is $45, while a signed copy can be had for $39. You drop down to $27 and there’s another PSA 8. Or you can get a PSA 7 for $22, with a best offer option. If you just want a regular mid-grade card, there are a ton of options under $10. There are also 11 cards that are $2 or slightly less. There have been 35 sold copies of this card in the last three months on Ebay, including a PSA 10 that sold for the $1,000 asking price. Two days earlier, someone paid $50 for a PSA 9. That’s quite a difference.