Today marks the 140th anniversary of the first game in Pittsburgh Pirates franchise history. That seems like an odd way to start an article about a 1983 Topps card of Rod Scurry, but here we are. I already did an article covering the first game so no need to do that again. I couldn’t do a Card of the Day article on any players from that game on May 2, 1882 because none of them have cards from their time in Pittsburgh. A few of them do have cards in the 1886-90 Old Judge set, but they are shown on other teams. I decided to skip forward to the 100th anniversary team in 1982 and I looked for the best player (sort by 1982 season WAR) who hasn’t been featured here yet. That’s how we get from the 140th anniversary of the team to card #537 from the 1983 Topps set, which features Pirates pitcher Rod Scurry. This just happens to be the first solo Pirates card featured here from this set. I’ve used two  cards from the Super Vets subset, and I used the Team Leaders/checklist card, but no regular player card. 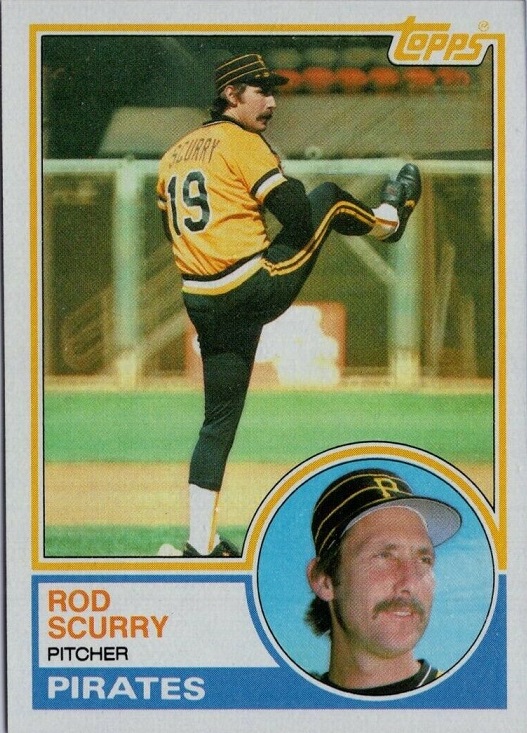 What I like here is the use of a Pirates color around the photo, something that varied by team. All of the Pirates had a yellow frame and blue at the bottom around the name/position/team. I’m not big on portrait photos of players. I like action shots or even staged action is fine. So adding a second photo that is a portrait shot doesn’t add anything for me. I will say that I can’t hate on another look at the pillbox cap, so that helps. It’s also a nice throwback look to the caps they wore 100 years earlier, which is a nice tie in. I like seeing the team logo on the front of cards, so the fact that Topps left it off this year takes away some points here. For this card in particular, that’s a great action shot and that’s also my favorite uniform combo from the mix-and-match era. Basically, I like the Scurry card more than some other Pirates cards in the set. 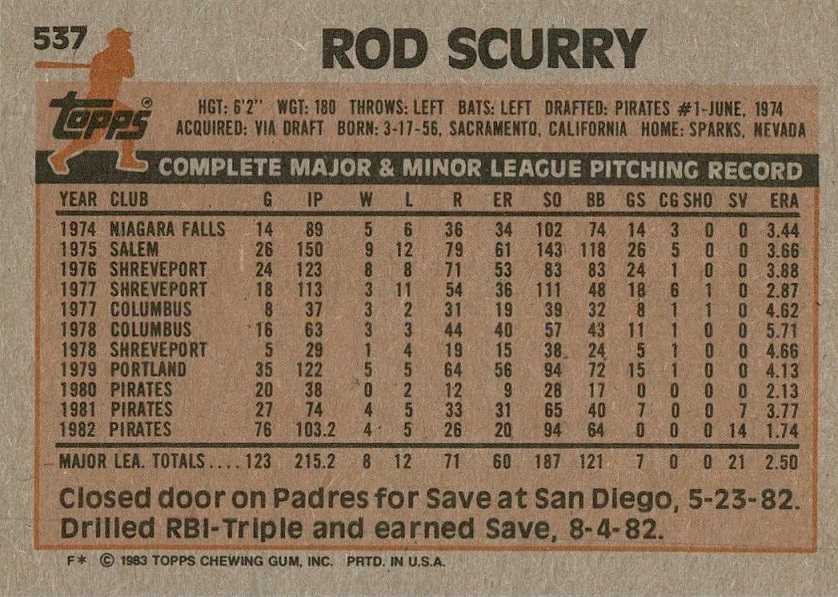 Three things I like on the back here. The player logo under Topps adds a nice look, though maybe going with a pitcher on the back of pitcher cards would make more sense. I still like it though. I also like that they included all of his minor league and Major League stats. That didn’t happen for everyone, but his career was short enough at the time. The final thing is the color combo makes the stats easy to read. We are talking about the set that followed the awful back idea from 1982 to use a dark color writing on a dark background color. One interesting note about Scurry that this card doesn’t show is that he was called up by the Pirates in 1979, but didn’t get into any games for the World Series champs.

If you’re interested in this card, it is plentiful on Ebay, with no real noteworthy auctions among the 58 currently listed. So basically, just watch the shipping charges, because someone might be selling it for 99 cents, with 4.99 shipping, when they can mail it for under $1. A handful of sellers have this card listed for either 99 cents or $1.00 delivered (not including tax). Five have sold on Ebay in the last three months and all of them sold for under $2 delivered.