Today’s Card of the Day is the first appearance here for infielder Gene Baker. He was acquired by the Pirates from the Chicago Cubs on this date in 1957. He had five choices for this article, appearing in the 1958-61 Topps sets, as well as a 1980 TCMA set for the 1960 Pirates. I went with the 1958 Topps set because it’s been a while since it has appeared in this series. In fact, it was exactly one year ago today. When a coincidence like that happens here, it’s usually not a coincidence. I’m just featuring the same player on his birthday, so he appears one year apart. In this instance, it’s completely a coincidence, because the article from one year ago was a reader submitted article looking at the 1958 Topps card of Roberto Clemente. I already had the Baker card picked and the article started before realizing it was the same date. Here’s a look at card #358 from the 1958 Topps set. 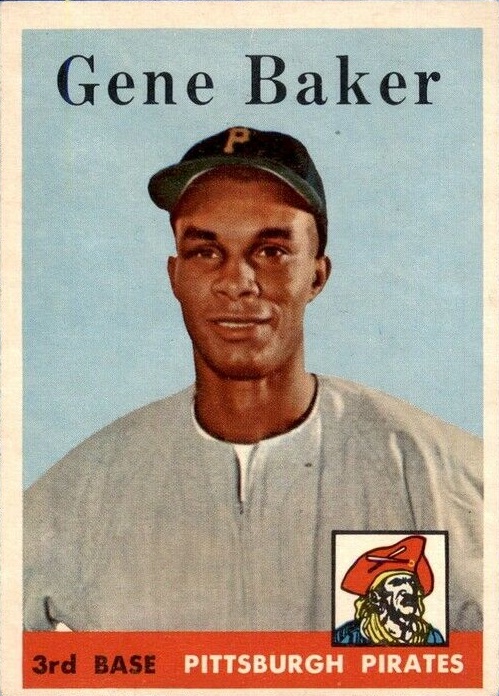 The 1958 Topps set used a solid one-color background, though they switched the background colors up and they didn’t match team colors or go with the same color for an entire team. It appears to be totally random, so you’ll find Pirates players with this color back, as well as green, orange, yellow, red and a brighter blue. The stripe at the bottom where it has the position and team name never matched the background, though the orange ones with red stripes look close. The color of the letters at the top was either black, white or red. How great is that old Pirates logo? That was the one they had before they went to the overly-cartoonish one from their championship year two years later. I would have been totally against that back then. 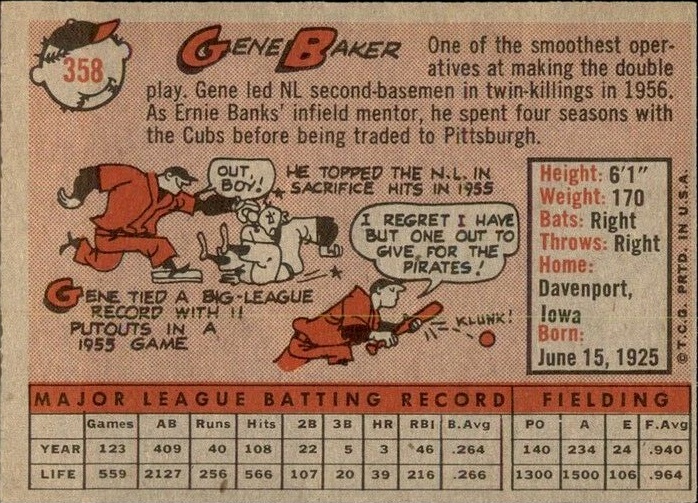 The back features Generic Gray Topps Man, who has the versatility to play every player in baseball history because he looks like no player in baseball history. In the top left corner you’ll see the baseball design used to house the card number. If I could describe that design in one word, I’d say it is “interesting”. Not sure if that’s the right word for it, but that’s what I used for lack of a better term.

The back here mentions that he made up a great double play combo with the legendary Ernie Banks, but if you remember the front of this card, his position with the Pirates was third base (mostly). Baker only saw regular time with the Pirates once during his time with the team. He played 113 games after the trade in 1957, then played a total of 71 big league games during the 1958-61 seasons, and he batted just 119 times in those games. With the somewhat recent ruling that the 1920-48 Negro Leagues are now considered to be Major League teams, Baker’s big league debuted moved up five years to 1948. He played minor league ball, mostly in the Pacific Coast League, during the 1950-53 seasons, before joining the Chicago Cubs.

If you’re interested in adding this card to your collection, head over to your local Ebay, where they currently have 91 active auctions as of this writing. The lowest price is $3.75 and it has a best offer. The highest is ridiculously priced at $500 because the card looks pack fresh. There are a few signed cards in the $40 range. He’s not the most difficult signature, but he did pass away in 1999, so it’s been a while. There aren’t many graded options for this card, and most of the Ebay copies are in the $10 area.