Today’s Pittsburgh Pirates Card of the Day comes with a bit of an asterisk. I once asked people on Twitter if a card needed to say the player was on the Pirates for it to count as a Pirates card. Basically, if you were collecting the team set from that year, would you need that card for your set to be complete. The answers were split, with just as many people saying the uniform matters as people who say the team name listed matters. If I was going to collect a set of 1982 Donruss Pirates cards, I’d have to include today’s card in that team set, but I would definitely understand if people left it out. Let’s get into the card right now so you can see why there’s confusion, as well as why the word “error” is in the title here. Here’s card #544 from the 1982 Donruss set featuring Phil Garner. 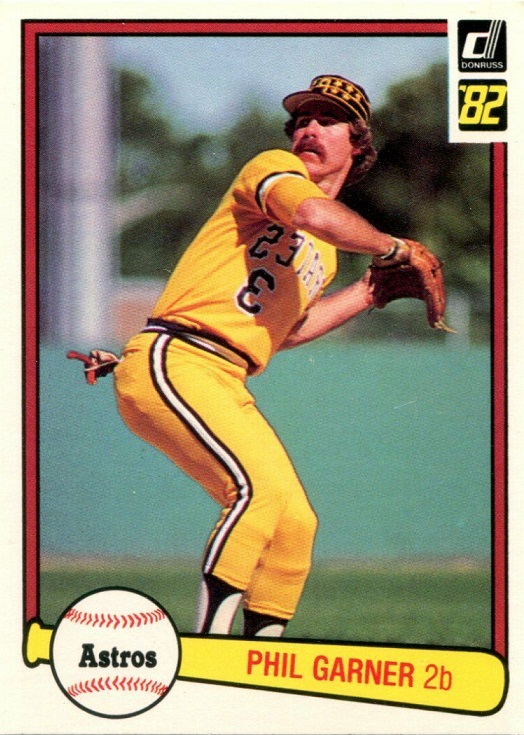 Let’s start with the obvious part first. The error here is the photo being reversed and Donruss did correct the error, so both versions are a little harder to find than the average card from the set, but neither is difficult to find in general. Garner did not throw lefty, and he did not wear a shirt that said “SETARIP” with a backwards “3”.

Now we get to the question part. Even backwards, you can tell that this all gold uniform was part of the Pirates mix-and-match era. Even this look was a bit too much for me, but I really liked the gold top with the black pants. So the uniform should make it a Pirates card, right? However, look at that baseball in the corner. It says Astros. That wasn’t an error, Garner was traded to the Houston Astros late in the 1981 season for Johnny Ray. The problem for Donruss is that the trade happened too late for them to get a new photo of Garner, so they went with the Pirates uniform, which created the card you see above.

So I ask you good people, is this a Pirates card? An Astros card? Or are you a middle ground person, where it fits in both team sets? Answer in the comment section below please. 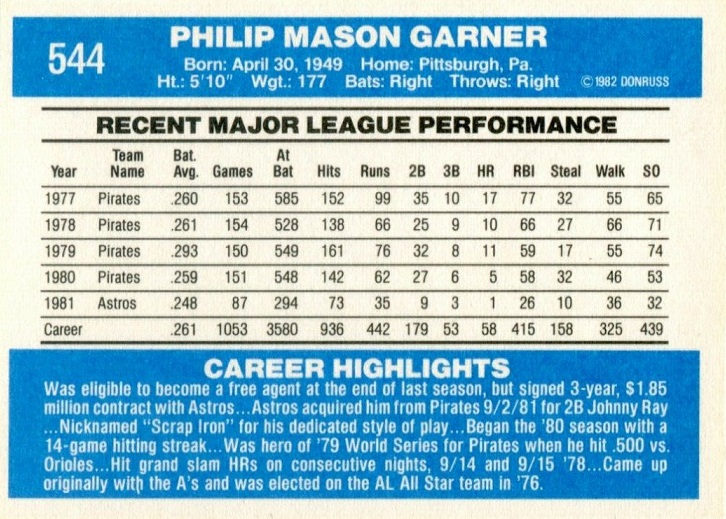 You could say that there is another error on this card. That set of stats for 1981 should say Pirates/Astros, or however they would make the two team names fit in that line. That makes it look like he spent the entire strike-shortened 1981 season in Houston and they somehow missed getting a photo of him all year.

The 1981 Donruss set was their first year producing a large set to compete with Topps and Fleer, which was also producing a large set for the first time in 1981. The backs on those 1981 Donruss cards had just one year of stats and career stats. They also used only nine categories, leaving off the last three categories you see above (walks, steals, strikeouts). Those cards in 1981 had a timeline of events from top to bottom. Donruss added more years of stats in 1982 and then wrote in more info than before in the career highlights section at the bottom. They decided to keep this set up up until 1992 when they switched things up and added a photo, while moving the stats and highlights around.

If you’re interested in this error card, it will cost you about $5, unless you wait for an auction and not a buy it now type sale. The corrected version appears to be easier to find and you can get it for around $2-$3 with multiple choices in that range. Some people are also selling the pair, but I don’t see any active auction that gives you a better price than buying them individually. Garner has signed copies of both the error and the regular one. Those can go for about $10 and he has a very nice signature (that’s how you know he isn’t a current player).