Today’s Pittsburgh Pirates Card of the Day article is one of my favorites to write. Any time I can find a player who hasn’t been covered here in the first 600+ articles, and find him in a set that also hasn’t been covered here, then I know it’s going to be a fun and interesting piece. Today’s first-time set is the 2001 Upper Deck Vintage set. Today’s first-time player is John Vander Wal, who is celebrating his 56th birthday today. He was part of two noteworthy trades during his somewhat brief time in Pittsburgh. He joined the Pirates in exchange for Al Martin on February 23, 2000. He left the team in the Jason Schmidt/Ryan Vogelsong deal with the San Francisco Giants on July 30, 2001. In between, he played corner outfield and first base for the Pirates, putting up the best year of his career during his only full season with the club.

Vader Wal finished with 6.2 WAR during his 14 seasons in the majors. His second best season in that category was in 1998 when he put up 1.1 WAR. His best season was 2000, when he finished with 3.0 WAR, nearly half of his career total. He was the fourth best player on the team that year behind Brian Giles, Kris Benson and Jason Kendall. This 2001 Upper Deck Vintage card came out after that season and you will see on the back of the card why that one years stands out so much in his career. Here’s a look at card #312 from the set, featuring John Vander Wal. 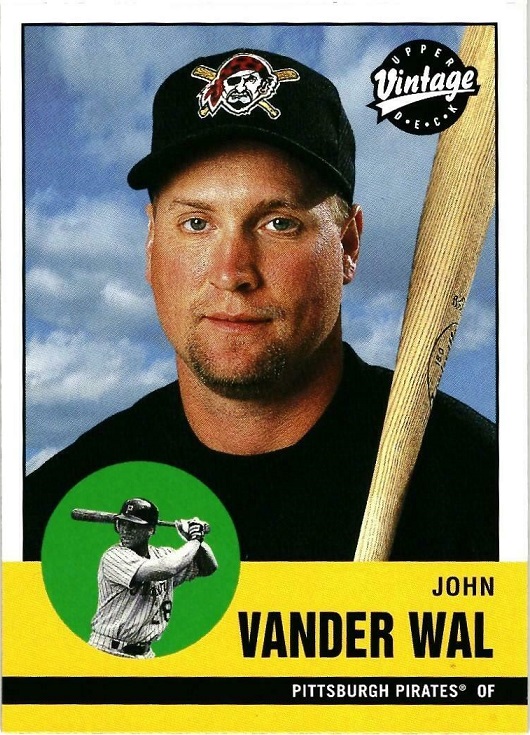 This design probably looks familiar to you if you know anything about older cards. Upper Deck used something extremely similar to the 1963 Topps design and called the card set Vintage. The 1963 Topps card had a photo about the same size, as well as a second photo in a small circle that is partially in the photo and partial in a box at the bottom. They also had the first name on the top line, last name bigger on the second line, then the team name and position on the third line. The biggest difference here besides the Upper Deck Vintage logo is that the team name/position is in a stripe. Yup, they added a stripe and called it something else.

Don’t get me wrong, I really like the look of this set, and who am I to care whether or not Upper Deck used a Topps idea. I like the stripe added because they used Pirates colors (close enough on the yellow). Not every player on the Pirates in the set make use of the yellow and black combo in that section (Francisco Cordova is another with those colors), but that’s something that the 1963 Topps set didn’t do. They changed colors for all of the teams, but their yellow box at the bottom used red writing only.

What is your guess on this card, real background or not for the photo? To me it feels like they didn’t take this photo outside. 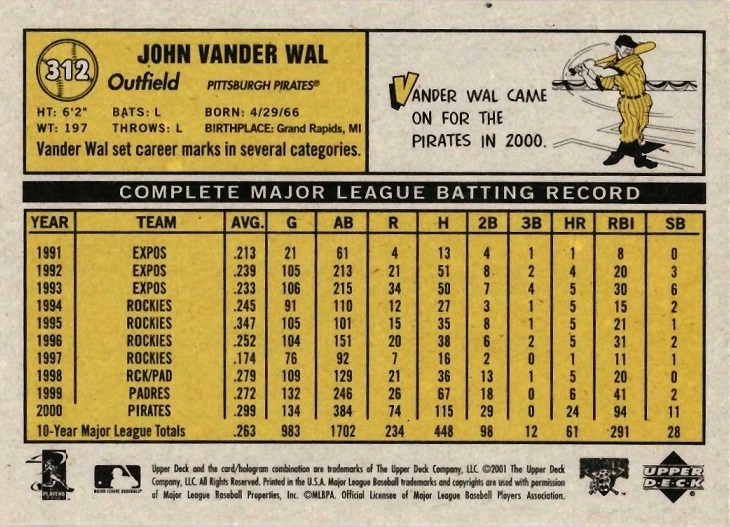 Oh come on, this is a 1963 Topps back design and color combo. In fact, they even used a cartoon that stars the Generic Gray Topps Man, who looked like no player ever, so he can represent any player ever. He could play Prince Fielder one day and Kent Tekulve the next, despite the fact that they looked like the number 10 if they stood next to each other. Another way to say it is that he could play both Abbott and Costello in the Who’s on First skit, or star as John Cangelosi and Randy Johnson. Who knew that Generic Gray Topps Man was so talented that he could appear on Upper Deck cards as well.

One of the funny things on this card is how brief they are with describing his 2000 season in two different spots. They really tell you nothing in two attempts. You can look at the card and tell he had a magical 2000 season, and it was also the first time that he really got the chance to start often. The only thing he didn’t do was hit triples that year. He had a solid 2001 season, but his .806 OPS that year was 166 points below his 2000 mark.

If you’re interested in this card, there are a few options on Ebay right now, but it isn’t a card that gets listed often. It also doesn’t sell often, with zero sales of this card in the last three months. There are 14 current auctions, with the lowest one being $1.64 delivered (doesn’t includes sales tax). Another 4-5 are right around $2, then others have higher shipping charges. You should buy the cheapest one. As an interesting side note, one seller is claiming to be selling an autographed copy of this card, but there’s no autograph on the card, so I’d definitely get a scan first if that interests you.