Today’s Card of the Day comes from one of my favorite Topps sets ever. If we are going strictly by the front design, the 1962 set can fight it out with the 1956 and 1987 sets for my favorite. Today we also have a first-time player here, who won’t be a regular in this series because there aren’t many cards of pitcher Tom Sturdivant with the Pirates. In fact, I had three choices here and a bad scan eliminated one of those options. I was basically choosing between his 1962 and 1963 Topps card and I ended up just going with the one that hasn’t been used here in a longer time. The 1963 set has appeared somewhat recently, while the 1962 set was last used back in early September when we looked at the card of Bill Mazeroski. So here’s a look at card #179 from the 1962 Topps set featuring Tom Sturdivant. 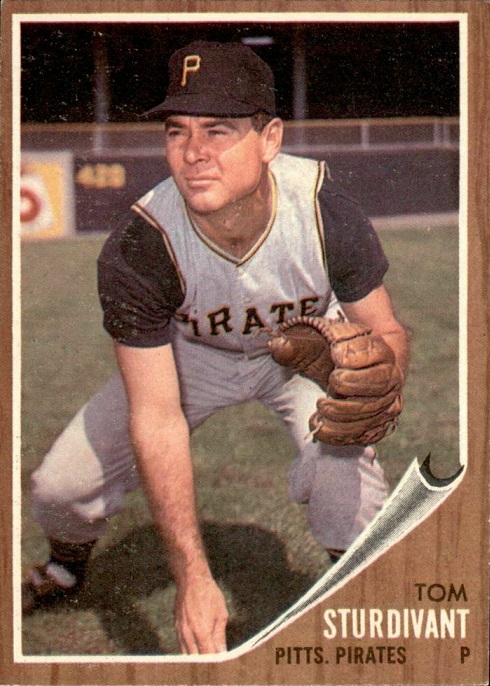 I’m a big fan of the wood-grain border look, as long as it is done right. This color border they chose looks great with the old style photo colors. Every uniform works with the border, eliminating the need to match up border colors to the teams, which was an idea that worked so well with the 1981 Topps set. I also really like the idea of the folded up bottom corner, as if the photo was placed on a plaque, but one corner isn’t sticking. Then they chose that spot to put the team name, player name and position. I’d rather that they spelled out all of Pittsburgh, especially with empty room, but that’s a small nitpick that doesn’t take away from the card (I know some people really don’t like that abbreviation for some reason).

Sturdivant is in the typical pitcher follow-through pose that Topps used so many times throughout the early years before actual action photos came into play. I love that uniform style with the vest and black undershirt, with the great road grays. I always find it amusing that they staged an action photo, but here’s the pitcher with the outfield wall and dimensions right behind him. Why not just go to the mound or bullpen? 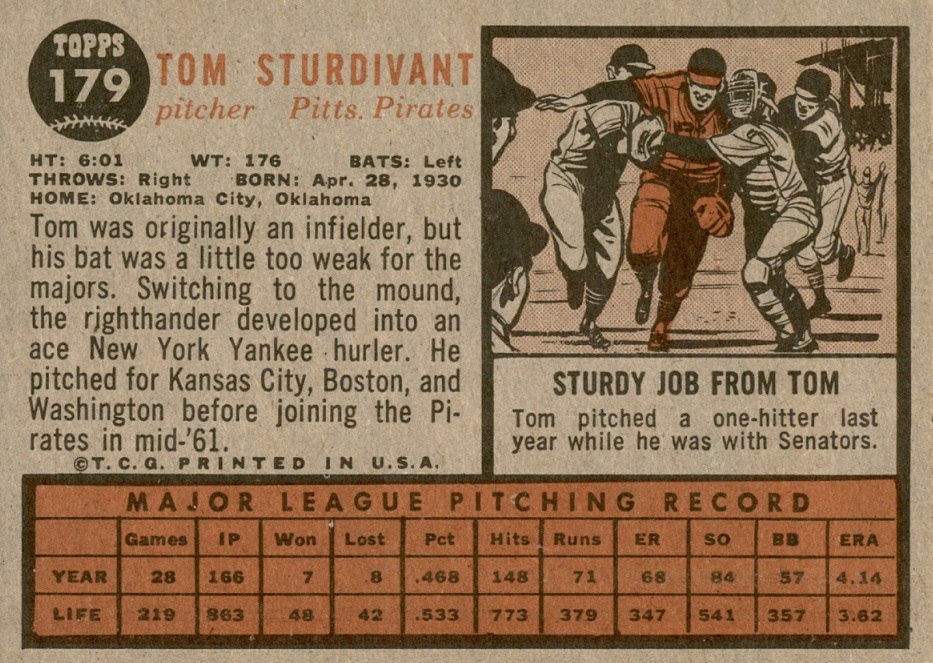 The back has to have one of the strangest cartoons ever, as generic gray Topps man put in overtime for that one. You assume it is the teammates of Sturdivant congratulating him for his pitcher performance, throwing a one-hitter against the Boston Red Sox on May 13, 1961. If that’s the case though, why is he wearing a different uniform than his teammates? To me it looks like the opposing team is trying to tackle him, as a football game broke out on a baseball diamond. What that has to do with throwing a one-hitter, I have no idea.

Anyway, the backs here only included one year of stats and career stats. Because of that decision, his stats with the Senators and Pirates are mixed together. The back notes that he joined the Pirates mid-season, without going into detail, so there is a bit of history mystery. The Pirates got him in exchange for pitcher Tom Cheney, the man who gets almost no credit for one of the greatest pitched games ever, because every time it is brought up, it comes with an asterisk. Cheney holds the single-game strikeout record with 21. The asterisk is that it took him extra innings. Oh by the way, he allowed one run in 16 innings and threw a complete game! How about everyone else who fell short being an asterisk compared to his game? Back to Sturdivant. He was acquired on June 29th and had a 2-6, 4.61 record in 80 innings at the time. He finished with a 5-2, 2.84 record in 85.2 innings for the Pirates that season. That gets lost in a season that just looks average, especially when you realize that he had a 3.69 ERA that year, not 4.14 like it says on the card.

If you’re interested in this card, you have plenty of options on Ebay because the set is so popular. There are over 150 auctions for this card up right now. A few are autographed and they can be found for around $20 delivered. A PSA 7 is for sale for $44 and another is $40, with a best offer option. A large majority of his cards are under $10 and there are a few decent options under $3 delivered for the budget collector. If you want a nice mid-grade ungraded, you’ll find plenty of options in between that $3-$10 price range.