Today is the 50th birthday of Francisco Cordova, the man who threw 90% of one of the greatest pitched games in Pittsburgh Pirates history. On July 12, 1997, he threw the first nine innings of a ten-inning no-hitter, with Ricardo Rincon finishing off the game. Just over a year ago, we featured a 1998 Topps card that celebrated that pitching performance. This is the first time that we are giving Cordova a solo article in the Card of the Day series. I stayed with a 1998 card for him, but only because I saw his Donruss card from that year and realized that we haven’t featured that set here yet. So it’s a first time for the set and sort of a first time for Cordova, at least the first time that he isn’t sharing the spotlight. 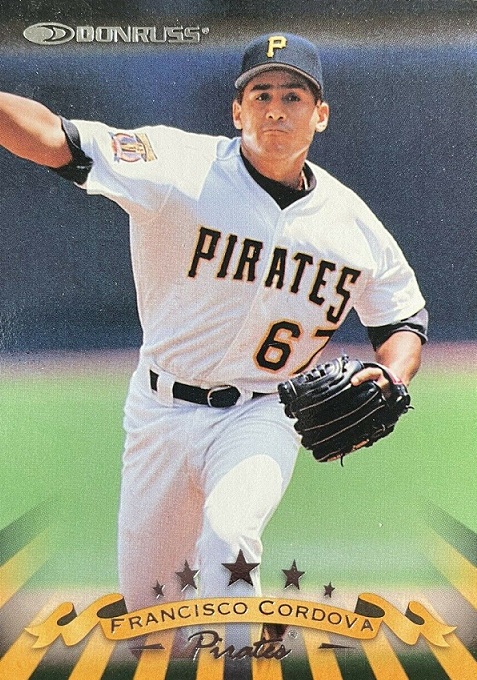 This is a nice action shot of Cordova, almost like the batter was the one who took the photo. What I really like here is that you get a decent shot of the sleeve patch, which was a 25th anniversary patch for Roberto Clemente’s last season in the majors. I don’t think it ever really set in how big that number is on the front of the jersey, which is something you almost never see at any point in baseball.

As for the set design, they went with the borderless look, but added in an interesting design at the bottom. I like how the stripes fade into the photo, and the player name in the banner is a nice look. I’ll note that those stripes are team colors or purpose, and other teams have matching colors as well. Sometimes set logos both me, usually when they are too big, but I like the look of the Donruss logo here. It’s out of the way, but it works well with the card. All this front is missing is the team logo… 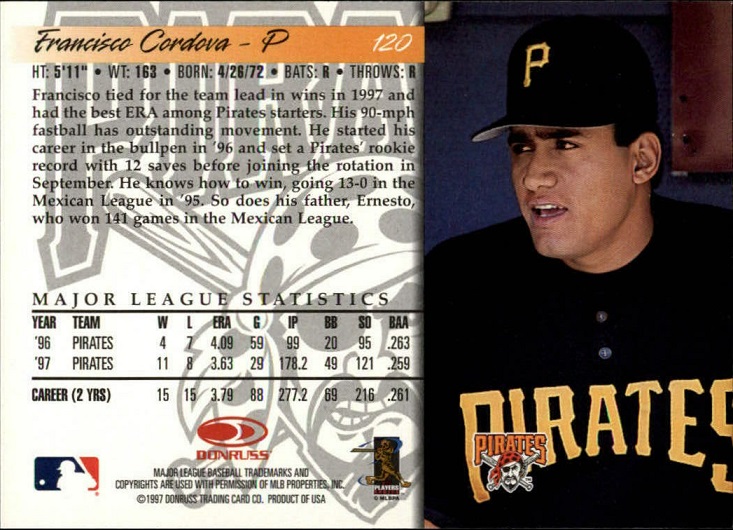 The back here is very odd, but they got that great circa 1998 logo on the back 1 1/2 times. When I look at this back, it has the feel of two different partial cards side-by-side. Donruss decided to add a second photo on the back, which is generally a good idea, but they made it very big, which limited the statistical categories that they could include. That great background logo idea is ruined by being chopped in half by the out-of-place photo.

This really has to be one of the strangest back ideas ever and it does not work for me. It reminds me of chocolate covered bacon. I love chocolate and bacon, but to me they do not work together at all. I like the left side with the background logo and black & white look. I like the second added photo and the use of the team logo. I don’t like them together, at least not how they did it here.

Perhaps you like the back, or you’re just smitten enough with the front that it doesn’t bother you. If that’s the case, then head on over to your nearest Ebay and there are multiple options for this card besides the base card you see above. There’s a Gold Press Proof limited to 500 copies that is for sale for $11 delivered, with a best offer option. There’s one seller who has two Silver Press Proof cards, which was limited to 1,500 copies, and they are going for just over $8 each. Another seller has it for $5, so I’d go for that one. If you just want the regular one, then it can be had for as low as $1.25 from two different sellers, just watch the shipping charges when you buy.