In 1980, TCMA and Renata Galasso Inc. decided to team up on a set called Baseball Immortals, which was released over an eight-year time-span. When they were done, there were 199 cards total in the set. They updated the set to include newer Hall of Famers each year through the 1987 class. The initial set released in 1980 had 173 cards. Since the set number changed numerous times, you can find this set labeled as being complete in a few different numbers. Card #120 featured Hall of Fame first baseman Jake Beckley, who played for the Pittsburgh Alleghenys/Pirates in 1888-89 and then again from 1891-96. You can find some people who believe that he is the best first baseman in franchise history, though most all-time teams will put Willie Stargell there, even though his best value came from left field, where he spent a majority of his time.

This Baseball Immortals set can be described as “interesting”, and inspired by the 1975 Topps set. It’s one of those sets that you either love or hate. It’s not that popular, especially considering that you can’t get a better group of players than all Hall of Famers, yet the price for a set is relatively low (see below). Let’s look at this first-time set. 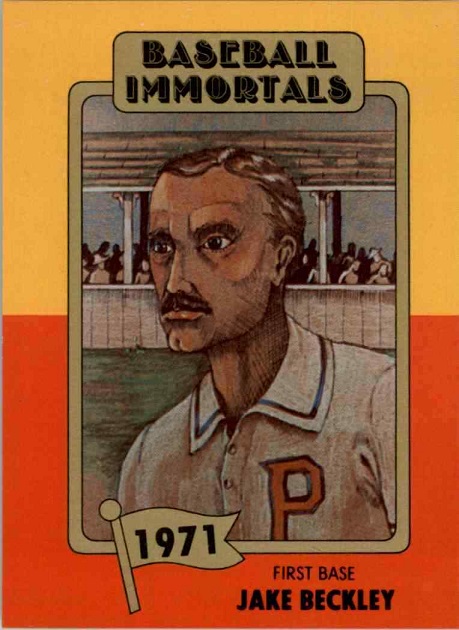 If you know the 1975 Topps set, then this front design should look somewhat similar to that, especially with the borders. However, this entire set contained artwork, and the painter clearly took some liberties here, not going for realism with the photo. I like the entire old style look to the photo. Some of the cards in the set are just cards from other sets. An example would be the Fred Clarke card, which is just the photo from his T206 batting card. You can see the set name at the top of this card and that pennant at the bottom that reads “1971”, is the year that he was elected to Cooperstown.

Some of you probably looked at that card and thought it was cool. Others probably hated it. Probably not too many middle ground people. Just my guess. 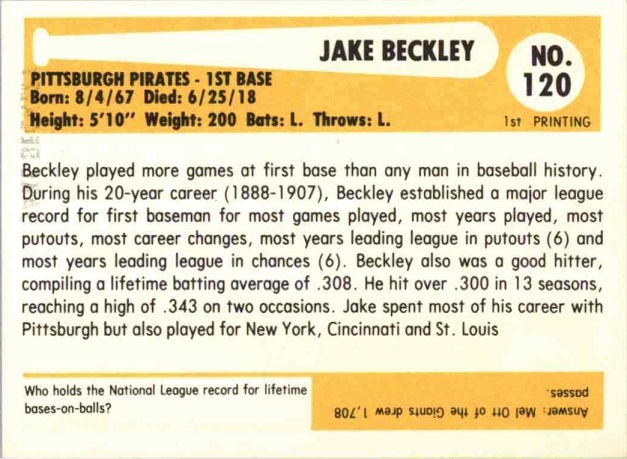 This back is really interested to read because you are getting career stats and records that were written 42 years ago, so you get to see how they stood up over the test of time. The trivia question answer is no longer correct, and it’s interesting to note that Barry Bonds (the leader) played for the Pirates and Giants, and this is a Pirates card, with a Giants player as the old correct answer. As far as the first base records, I’ll first note that it says Beckley had the most “career changes”, when it meant chances. I was trying to think about what they could have meant with career changes for about ten seconds before it clicked.

Beckley is still the all-time leader in putouts, which covers all positions, all leagues. No one in baseball history has recorded more putouts. He was passed by Eddie Murray in games played at first base, so he is second now. Beckley played 20 seasons total. Murray played 21 seasons, though he didn’t play first base during his final year, so I’m not sure if they are tied for the first base record or not, but it seems like they should be.

If you’re interested in this card, there are seven auctions currently up on Ebay for it. The cheapest one is $4 delivered, however, there is one that just sold for $2, so you can wait and probably get a better deal. The complete sets have sold for as low as $40. Just make sure that you’re buying the one with 199 cards for that price.