Hank Greenberg is one of the best players to ever suit up for the Pittsburgh Pirates. He lost four years to his service in the war and another year due to injury in his prime, yet he still finished with 55.5 WAR in just 1,394 career games. I noted in an article recently about Arky Vaughan averaging .043 WAR per game during his career, which was second to all shortstops to Honus Wagner. Greenberg averaged .040 WAR per game. That’s better than anyone you can think of for the Pirates except Vaughan and Wagner.

The Pirates gave up a lot of money to get Greenberg and paid him well for the 1947 season, but he decided to retire after one year with the team, so Pirates fans didn’t get to enjoy him for long. That also means that he doesn’t appear on many cards with the Pirates. Even today’s Card of the Day is a bit of a stretch because he was already retired when the card came out shortly after his time with the Pirates was over. There’s no team name on the card either. Dixie Walker is in the same 1948 R346 set and his card says “Pittsburgh” on the front.

This is the first time for this set (more details below) and the first time for Greenberg. If he’s going to appear here again, which he probably will, it will be on a newer card that depicts him with the Pirates. There are a few of those to chose from.

Here’s the front of the card (back is blank): 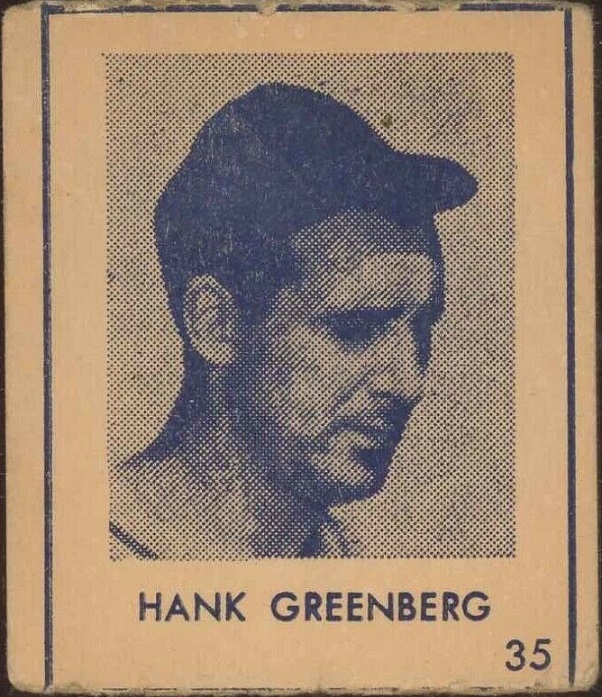 As you can see with this card, there isn’t much to it and it’s not pretty. This set is often called the blue tint set and the R346 is a random number assigned after the cards came out. The “R”  category is for cards issue by gum companies during this era, though this should probably be a “W” card, which was the category for strip cards, or for those who don’t know, cards that came in strips and were cut by the consumers after purchasing them. Since you were relying on people to cut these by hand, many times kids you would assume, these cards can be found with some rough cuts.

The R346 set came in strips of six cards and there were eight different strips that made up the 48-card set. Greenberg is #35 in the set. These cards, when cut correctly, measure 2” by 2-5/8”, and that back is a plain gray cardboard color. All of the cards in the set looked the same, with a blue tinted low quality photo, a box around the photo (it’s hard to see at the bottom here due to the cut) and the player name, team name by city, and the card number. If the city had teams in both leagues, they differentiated with an “A” or “N”. As mentioned, Greenberg didn’t have a city, but he was on the Pirates in 1947, so this is considered to be a Pirates card to some people. Lou Gehrig is in the set and he passed away years before these cards came out, and they left off the team name for his card, despite him only playing for the Yankees. With that in mind, this being called a Pirates card for Greenberg can be argued as not being correct.

If you’re interested in this set, which isn’t overly popular, but they are hard to find, then you’re going to pay between $150 and $350 if you get it on Ebay. There are four auctions up and three are graded, while the fourth is from a reputable seller and it’s also the cheapest one. The most expensive is a PSA 2, which has a best offer option. There’s another PSA 2  for $310 with a best offer, and then an SGC 40 (PSA 3 equal) for $250 or best offer. There haven’t been any sales of this card in the last three months.