Today’s Card of the Day comes from a player from the 1960 World Series winning Pittsburgh Pirates. Mickey Vernon’s role with the team that year was as a coach all year, but the Pirates added him to the active roster in September and he served as a pinch-hitter. He didn’t see much work, but the move allowed him to become one of the first four decade players in baseball history.

Vernon had a career that would have likely received plenty of Hall of Fame attention if he remained in baseball during the war years. He missed the 1944-45 seasons, which were years that had really watered down talent due to so many players serving during the war. When he returned in 1946, he won his first of two batting titles. Without two years that could have added significantly to his stats, he finished with 1,196 runs scored, 2,495 hits and 1,311 RBIs. He received as high as 24.9% of the Hall of Fame votes, but imagine what two big seasons could have done for his career.

Vernon had one card released when he was with the Pirates, and he shared it with three other coaches. We featured that card here just over a year ago. Today’s card was part of a team set put out by TCMA, who are better known for their minor league cards. They didn’t have the rights to use current big league players, so they also put out some sets with former players, including a 1960 Pirates team set, which had a total of 42 cards. Vernon is card #24 in the set (technically card #1980-0024). 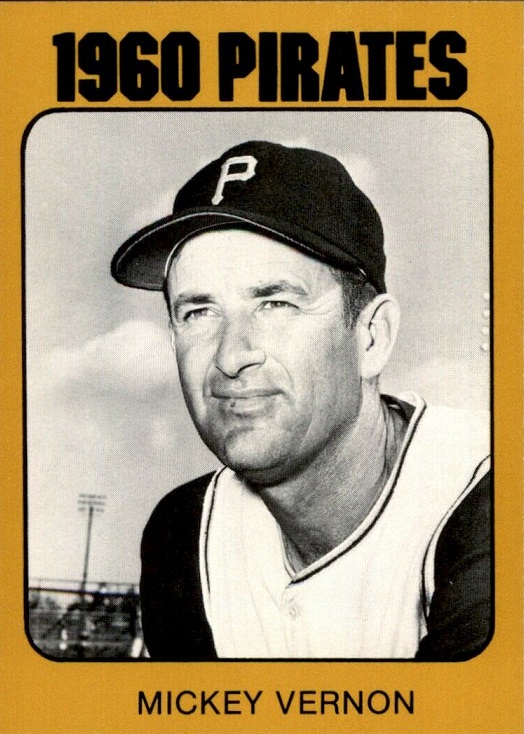 All of the cards in the set featured black & white photos, and most of them are similar in look to what you see here. A few of the batters are shown in a batting pose (including Clemente and Mazeroski), a few of the pitchers are shown in the follow through from a pitch (staged), but most are portrait style photos looking off to the side. These cards have a nice Pirates feel with the gold borders and black writing, letting you know up top that they are from the 1960 Pirates. 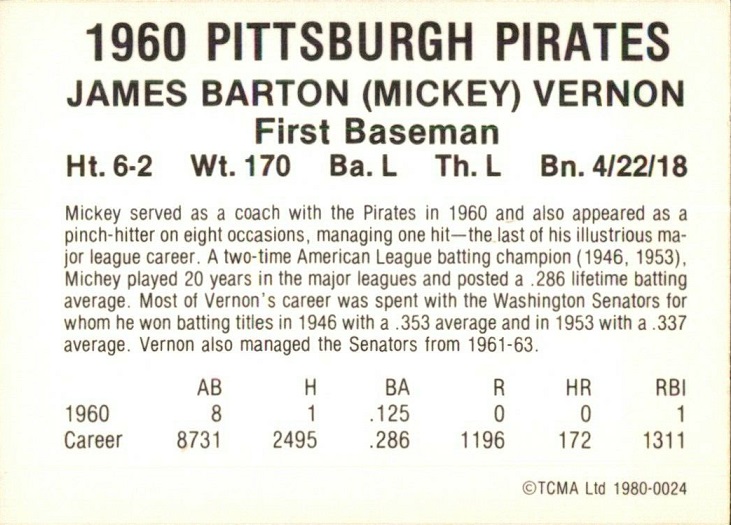 Typical of TCMA cards of the era, the backs were very basic. White background, black writing, no designs of any kind. They also used one year of stats, but in this case it makes a lot of sense because they were featuring the 1960 team specifically. You can see everything I mentioned up top, with the nice line of stats, 20 seasons in the majors, two batting titles and a small role (as a player) with the Pirates in 1960, which was his secondary role. You might also notice that they called him “Michey” on the fourth line. Oh yeah, check out the birth date. That was 104 years ago today.

Quick story on Vernon about his cards. I was reading a baseball encyclopedia at a very young age (not a brag) and I knew quite a bit about baseball history before I went to the Hall of Fame at age seven, enough to know something about most of the players there before we went. Then my dad bought me a HOF yearbook and I read it on the way home, and about 100 times after that point. I mention all of that to say that when I bought my first card that was much older than me and used my own money (I believe my first allowance was $2), I didn’t spend it all on packs for once, and I bought a 1959 Mickey Vernon card. I guess even then I knew him from the encyclopedia, because he was the most significant player that I could afford. So for a time, he was my oldest card. It’s not worth much, but the sentimental value is very high on that card.

If you’re interested in the 1980 TCMA card, it can be had for $3 delivered, though it has a best offer option. I’ll note that if you’re thinking about getting, go for it, because only two are currently up on Ebay right now and the other is over $8 do to high shipping charges.