Today’s Card of the Day comes from a first-time set and it features a first-time player. The 2008 Upper Deck set hasn’t been featured here yet. This isn’t the Upper Deck regular base set, but it’s very similar. They released a set called First Edition, which is what I used here. It’s a smaller set, printed in a smaller (but not small) number. In that set, Ronny Paulino is card #170. In the regular Upper Deck set, he is card #206. It’s the same photo in both sets and same design, except for slight differences on the front and back. Here’s a look at the First Edition card of the Pittsburgh Pirates catcher from 2005 through 2008, who turns 41 years old today. 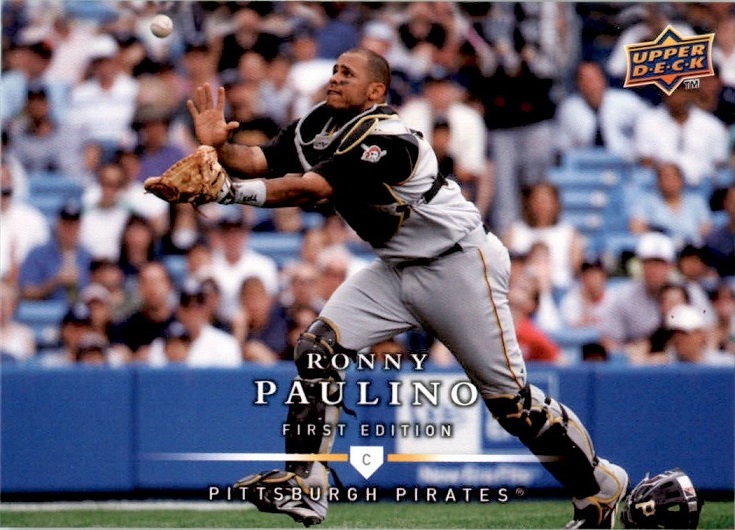 Two interesting things here. This card has a horizontal layout, which always seems to catch my eye, probably because that layout allows for better action shots. Plus the horizontal layouts stand out when a large majority of the set is the normal vertical layout.

The other thing is that I was able to figure out this play by the background. That is Yankee Stadium and Paulino played there twice before this card came out. One was a night game, one was a day game. You can tell by the photo that this is a day game, so all I had to do was check the play-by-play for a pop up to the catcher and sure enough, there it was in bottom of the seventh on June 9, 2007, when Miguel Cairo popped a bunt up behind the plate and Paulino caught it.

I have mentioned multiple times that I really like the borderless look on cards, which didn’t happen with a lot of sets before the mid-90s. This card has a nice little setup with the name, followed by “First Edition”, then the position in a little design, followed by the team name. The look of it goes well with the no border layout. I mentioned that there isn’t much difference between this set and the regular set. Picture this card without the “First Edition” line, move Paulino’s name down a little in that empty space, and there you have the regular Upper Deck card. 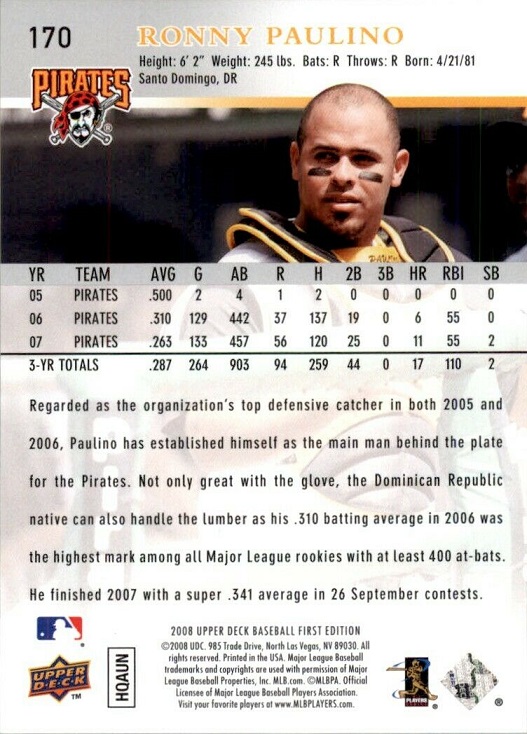 The back has the different number (170 instead of 206) in the top left and right below the little bio section in the middle, it says “2008 UPPER DECK FIRST EDITION” at the top of all of the legal mumbo jumbo. On the regular card, the number is 206 and it says “2008 UPPER DECK SERIES 1” in that same spot. The stats, photo, back layout and bio section are all the same. I’m wondering how many people have collections of these two sets mixed together and are wondering why they have two different numbers on the same cards. Don’t look at me, I can’t explain the reasoning behind it.

If you’re interested in this card, then the regular base card should interest you as well. If you search “2008 Upper Deck Ronny Paulino”, numerous examples of each will pop up and both are available for right around $2 delivered. The regular card has a gold foil version, which was limited to 99 copies, and it can be had for about $7 delivered. Most of that cost is the high delivery charge. The First Edition is harder to find (not in Ebay, in general), but it is not worth any more.