Today’s Card of the Day comes from a set that we haven’t covered here yet, but it will look very familiar. We are also featuring a player who hasn’t been here before. Card #444 in the 2006 Topps Heritage set is Pittsburgh Pirates outfielder Chris Duffy, who played for the team from 2005 through 2007. It was a short time period overall, but he was somewhat of a prospect, who had a strong debut in the majors, batting .341 in 39 games in 2005. He was extremely fast and has one of the most successful stolen base seasons in team history, going 26-for-27 in 2006. Only four players have ever had a higher success rate in a season in which they attempted at least 25 steals.

The combo of Duffy being a prospect and starting off strong led to him having a lot of card options. I picked this set because the Heritage sets always catch my eye when searching for new players, and because we haven’t used the set here yet. I chose Duffy because he’s somewhere celebrating his 42nd birthday today. So here’s a look at Duffy’s 2006 Topps Heritage. 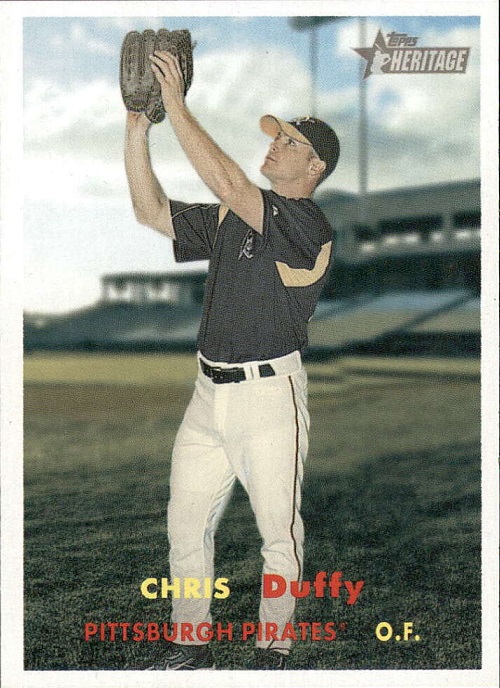 For those of you unfamiliar with the old baseball cards, that is the same exact design as the 1957 Topps set, except for that Topps Heritage logo in the top right corner of course. The 1957 set used a large photo of the players on the field, with small white borders and the name/team name/position in alternating colors. It was different than anything Topps did before, and they didn’t do anything similar until the 1967 set came out, though they made the team name much bigger that year, so the cards do look a little different. The photo has the old school feel to it too, which gives it eye appeal for the old collectors looking for new products. 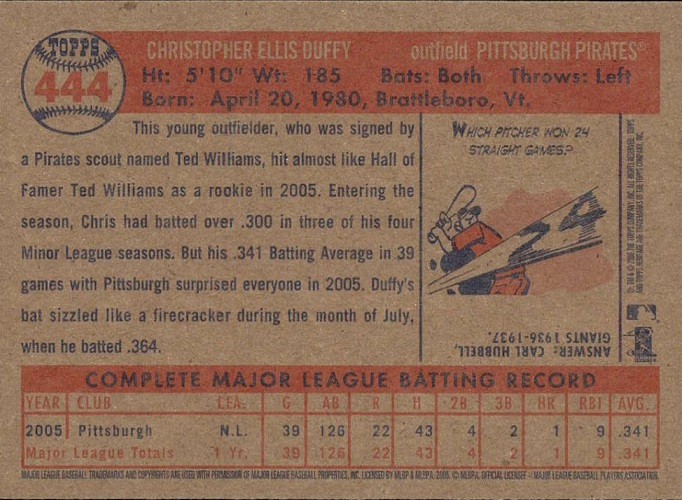 The back is the same exact setup as a 1957 Topps card and once again I read the answer before the question. I have no idea why I do that every time, but this time I know I would have guessed that answer. Fun fact about Carl Hubbell’s win streak. He didn’t win 24 straight games as the question said, he had a streak of 24 straight wins, but it was over 27 games. I’m sure that’s what they meant, but I wanted to be accurate with the streak details. He had two games that he closed out for saves, and only one start with a no decision during that stretch, which went from July 17, 1936 to May 27, 1937. From 1933-37, Hubbell went 115-50. In summary, he was good.

You can’t tell by this card, but the stats section here looks exactly the same as it would if he had 20 seasons in at the majors. In 1957, Topps included one year of stats (1956 in most cases, unless the player wasn’t in the majors that year), and then the career stats. Nothing else. All Duffy had at the time was one year of stats, so that’s all you get anyway.

The Ted Williams comparison always works out well – No one ever

If you’re interested in this card, there are 20 auctions on Ebay for it now and seven of them are $2 or less, so just watch the shipping charges if you’re going to get one. Might as well get it cheap. There’s only one auction of note and it’s an autographed one…I think. Someone wrote “CS S” on the front and the seller says that Duffy signed it, so I’ll take his word. In all seriousness, I looked at his autographs and he was very inconsistent, but a majority of them look like they say “egg”, which also looks like CSS sometimes, so yeah, it’s just a bad auto. The cost for the one autographed card is under $4 delivered, so that’s a pretty good deal.