Today’s Card of the Day comes from the 1990 Leaf set, which is one of the few sets from that era that remains very popular to this day. It helps that the set wasn’t mass produced like some of the products from that era when the baseball card industry was at its peak. This is the second time we have featured this set, but it has been over a year since the first time. The last/first was John Smiley on the date he hogs from everyone else by celebrating a birthday and getting traded on March 17th.

Today we look at RJ Reynolds, who turns 63 years old today. He came to the Pittsburgh Pirates in the Bill Madlock trade with the Los Angeles Dodgers during the 1985 season. He played 31 games for the Pirates that season, they stayed around for five more full seasons, before finishing out his career in Japan and Mexico. This is his first appearance in our Card of the Day series. Due to his time period with the team, he has plenty of cards to choose from, so I just looked for a set that hasn’t been featured here in a while and settled on this card, which is #381 in the 1990 Leaf set. 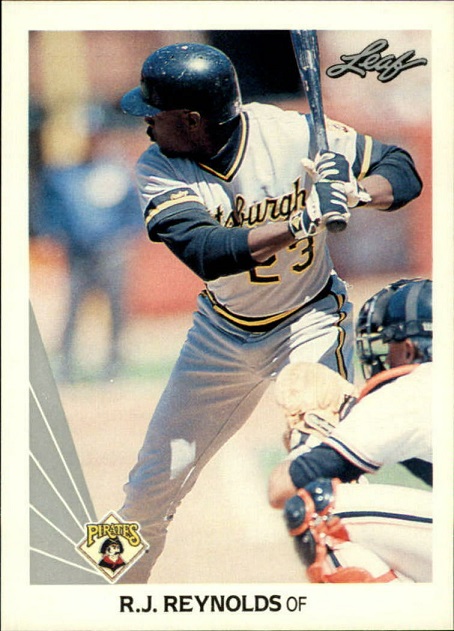 These cards were a premium set produced by Donruss in addition to their regular set. If you know baseball card history, you know that from 1981-1987, Topps, Donruss and Fleer mostly stuck with what worked, putting out some extra sets to get more business, but nothing too fancy (maybe Topps Tiffany counts as being fancy, but not exactly what I’m going for here). Then Score came along with quality photos and a tremendous amount of information on the back of cards, making a huge splash that lasted one year when Upper Deck came out in 1989 with glossy, high quality cards in foil packs. The Ken Griffey Jr rookie then made that set extremely popular. This Leaf set was the response of Donruss to Upper Deck really raising the bar for everyone else. Fleer put out their Ultra sets, Topps went with Stadium Club, though all three still produced regular sets for the average collector who didn’t want to spend a dollar for a pack of cards.

While the Leaf set is popular, I’m just an average fan of it. It’s not really a great design (I like the back more), especially with white borders and just plain writing for the name/position. You should already know by now unless you’re new here (if so, hi!) that I appreciate the team logo on the cards, but that feels like it could have been bigger. Love that logo though. It’s also a nice action shot of Reynolds at the plate, from an angle you don’t see often, and those uniforms are one of my favorites. 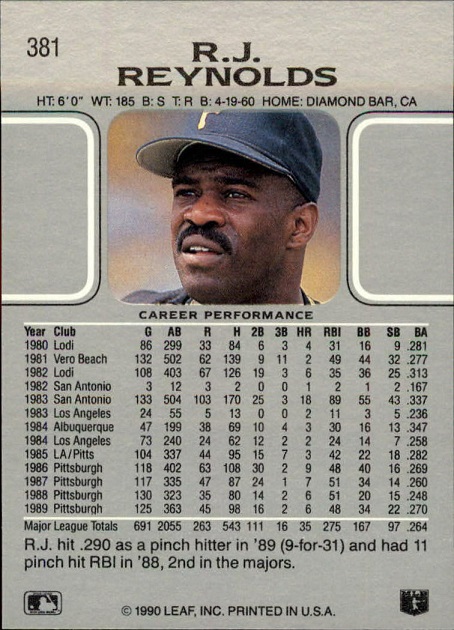 I am a big fan of the backs of these cards. I like the color combo (have always been a fan of the silver and black combo). I also appreciate the added photo and I’m always a big fan of complete career stats. They were one year short (1990) of getting his entire career in the majors/minors here. Reynolds put up some big numbers in the upper levels of the minors, then he was a solid regular during his big league career, finishing with 5.6 WAR in his eight seasons, while getting knocked slightly for his defensive shortcomings.

If you’re interested in this card, it’s relatively easy to find on Ebay and despite the set being popular, it goes along with the rules and regulations governing common cards on Ebay. One note here is that a 1990 Topps, Fleer, Donruss, Score cards of Reynolds are really worth a dime or quarter, just no one can sell it for under a dollar due to shipping and listing fees, otherwise they would be losing money. This card actually is worth more than those, but you’re still overpaying to get it (it’s $2, so it’s not hurting anyone). I saw about ten sellers who have a Reynolds card for around $2 delivered. Four of these cards have sold in the last three months and one was a PSA 10. Ebay doesn’t have the final price listed because the seller took a lower offer, but the original asking price was $36 delivered.