Today’s Card of the Day celebrates a man who spent the better part of his entire life with the Pittsburgh Pirates. Steve Blass turns 80 years old today. He is just as well known as an announcer as he is for his playing career, both the ups (winning the 1971 World Series) and the downs (having a baseball “disease” named after him). Blass has only been featured here once before, one day short of a full year ago. That card wasn’t even one of his regular issue cards, as he showed up on the World Series Game Seven recap card in the 1972 Topps set. So I basically had all of his cards to choose from for this article. The led to me scrolling eBay and I stopped quickly when I saw his 2021 Topps Fan Favorites card. Somehow I missed this card before today, but it immediately caught my eye. 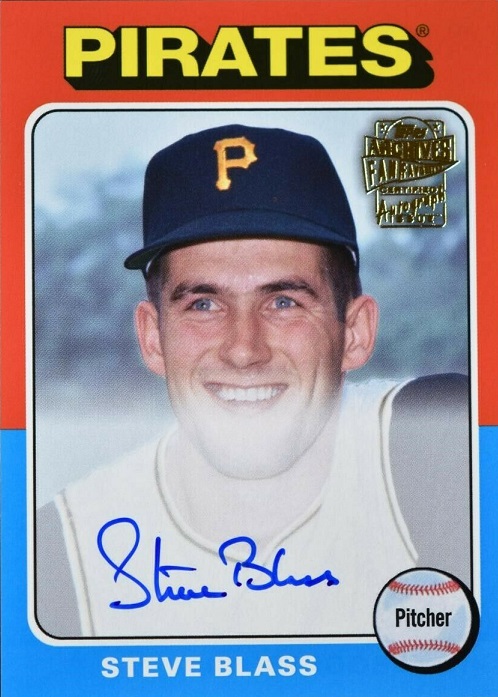 That is a 1975 Topps design on a brand new card. The last Topps card for Blass was in the 1974 set, so this is a new design for one of his photos. That’s also a photo that Topps used for the first in this set. They probably have plenty of extra photos of Blass from his playing days for use on modern cards like this one. I’m not a huge fan of the original 1975 Topps, some days it grows on me more than others, while sometimes I look at it and it feels like they tried to describe the 70s through a baseball card design. With more vibrant colors and glossy finishes to modern cards, I really like the look of this throwback design. If I was a new/young collector now and saw this design for the first time, I might be interested in starting to collect 1975 Topps cards. I wasn’t born enough to collect them originally, but I did get a stack of them many years later and I’ve added a few others over the years, but I wouldn’t say that I collect them.

Interesting note here to go along with the fact that I mentioned this is the first time I saw this card. In the little preview pics on Ebay, this scan up top looked like it had a glare at the bottom, so I scrolled through more options and the second one actually did have a glare from a light, but then once I saw more I realized that the bottom of the photo was purposely faded like that where he signed. Blass has a nice signature, unlike 97.3% of current players, who have “signatures” that looked like they did them were they were both drunk and asleep. Modern player autographs are just awful now. I can’t believe anyone collects them. 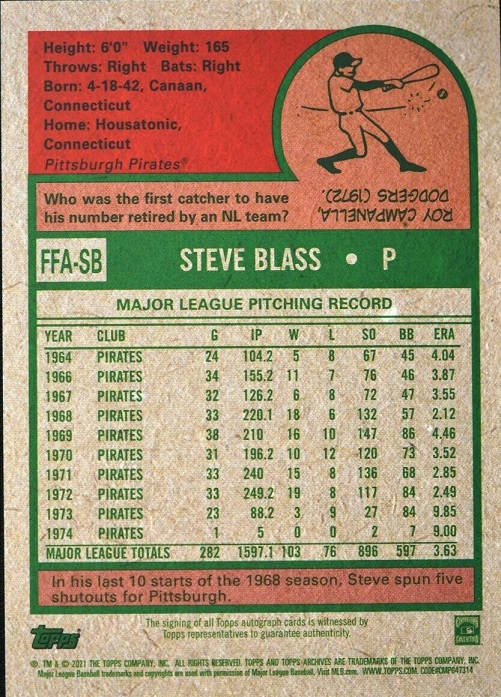 I have a very bad habit of reading the answers to trivia questions before I read the question. I know I do that every time, and I know I would rather that I didn’t do that so I could guess, but it still happens. So I thought of this in the reverse way, already knowing the answer. Would I have guessed anyone else before Roy Campanella for a catcher with a retired number? The answer is yes, and I was shocked to find out that neither had a retired number, though I didn’t think one did. My guess probably would have been Ernie Lombardi with the Cincinnati Reds. If someone could have said “no” for that answer, then I would have said it must be Gabby Hartnett with the Chicago Cubs. Surprisingly, two Hall of Fame catchers with long stints with one team, don’t have a retired number between them. So I feel confident that I would have got that answer wrong, even though I knew Campanella had his number retired long ago.

With these throwback designs, I always wonder how many years of stats Topps will use on the back. I mentioned that with Kent Tekulve when we looked at his recent card on a 1984 throwback design. I guessed that they would either include up until 1983 for his stats, or put all of his career stats. I was wrong with both guesses, as they included only his stats with the Pirates, which ran into 1985. Using the 1975 design for Blass took away the guesswork. Unlike Tekulve, he only played for the Pirates. He also finished his career in 1974, so no matter which of the three potential reasons I used (career with one team, career, year of design), they would have included all of his career stats on this card. Anything else would have been quite a surprise and also wouldn’t have made sense. By the way, this is the same design as 1975 Topps as well. It reminds me of Christmas, so I like it.

If you’re interested in this Blass card, you’ll be pleasantly surprised to find out that it is really easy to find, which keeps the price reasonable. There are different versions that go for slightly more. Ebay right now has a few silver version numbered to 99. The most expensive is going for $39 or best offer, then down to $29 for another and $23 from another seller, all the way down to $15 with a best offer from one seller (I thought about making an offer on this one). There’s a purple version numbered to 150, with two sellers right around $30 each, another for $24 delivered, and two for about $20. If you just want the regular autographed card, there are plenty in the $10-$15 range. You shouldn’t pay more than that.