Today’s Pittsburgh Pirates Card of the Day article covers a set that I assumed was covered here before. Along with the 1987 Donruss set, the 1987 Topps set is my favorite of the 1980s. Don’t make me choose between the two because it’s a toss-up. Somehow I have missed featuring it here until right now, 25 months into doing almost daily Card of the Day articles. There’s an asterisk or two here, which is why I thought I had featured this set.

I recently used a 2022 Topps card with Roberto Clemente, which utilized the 1987 Topps design. Before that, I had a card from the 1987 Topps Traded set and the 1987 Topps Mini Leaders set, both of which use the wood-grain design. So I’ve used three sets that used the same look based off of the 1987 Topps set. Somewhat lesser of a surprise is that this is the first appearance of Mike Diaz in this series. No offense to the man who they called “Rambo”, who turns 62 today, but he only played 247 games with the Pirates and many of those were off of the bench. This still counts as terminating two flying creatures with a solo rock, so let’s take a look at card #469 from the 1987 Topps set, featuring Mike Diaz.

These 1987 Topps cards are a thing of beauty. I’m guessing you need to like the wood-grain borders as much as I do to derive such pleasure from this set. I never really thought about this way until just now, but it’s like a card printed on a baseball bat. This set was a 25th anniversary tribute to the popular 1962 Topps set, which also used wood-grain borders, though they were slightly darker.

One of my favorite things that Topps does occasionally is match the card color up to the team colors. They did that here with the nameplate at the bottom, and it looks great. Then the obvious cherry on top is the Pirates logo from that era in the top left corner. That is my favorite team logo all-time (don’t tell the other logos please). While not the clearest photo, that’s a nice action shot of Diaz. 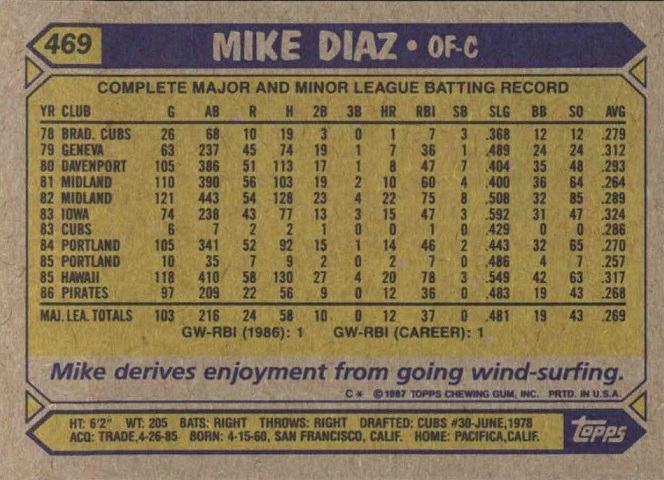 I’m a fan of the back colors here, which is not something I say about a lot of Topps cards. They had a habit of making cards hard to read, especially for players with a lot of lines of stats. I like that they included all of his career stats, which not every set would do. I also only used the word “derive” up top because I thought it sounded funny in the little fun fact at the bottom. Out of all of the things they could have said, or other ways they could have said it (Mike enjoys wind-surfing), somebody decided that was perfect.

How many people remember when game-winning RBIs were a tracked stat like everything else? The reason they got rid of it is because players were demanding more money during contract negotiations, using that stat as a tool. There was some odd cases, where players had a lot of them, but didn’t do much else. It also started working the other way if a guy didn’t have a lot of game winners, but did great otherwise.

I assume you either have this card already or you are now interested in purchasing one. Perhaps the whole team set, which includes the popular Barry Bonds card, which isn’t his rookie, but it was his first appearance in packs. As for Diaz, it’s pretty straight forward that this is a common card and all rules and regulations involving common cards on Ebay apply here. You can find it around $2 delivered and you just need to watch the shipping charges. There is one autographed copy and the price ($199 or best offer) made me think that his autograph is impossible to get, but apparently the seller has lost their mind. As I say though, it’s the only one listed, so they control the market right now. If you want an autographed card from him, they are available for around $10 delivered. You can also get the Pirates team set (29 cards) for under $10.