Today’s Pittsburgh Pirates Card of the Day features a first-time player and a first-time set. John Van Benschoten is not remembered too fondly by Pittsburgh Pirates fans, either by the ones who didn’t like the pick when he was drafted in the first round in 2001, and/or they just didn’t like the results. I tend to give him a break on the latter because he had shoulder surgery on both arms, including a second shoulder surgery on his non-throwing arm while rehabbing from the first. He missed the entire 2005 season and barely pitched in some rehab games in 2006, so he was basically out two full years. That was after he worked his way to the majors at the end of the 2004 season. The big league results were disastrous after he came back, though he did pitch well in Triple-A, so it’s hard to say how much three major surgeries and missed time took away from him.

I was okay with the pick when it happened, and I didn’t mind that he would be a pitcher instead of a hitter once I read the scouting reports. His hitting in 2001, when they let him get DH work in the New York-Penn League, left something to be desired. After that, it seemed like he was on a good path as a pitcher. As a side note, I was sitting behind home plate when he hit his only career big league homer, and it was the first game I went to at PNC Park. It was actually the first time I was in Pittsburgh as well.

Anyway, the man they called JVB because it’s easier than remembering how he spelled his name, is a noteworthy player in team history due to his first round draft pick status. It’s also his 42nd birthday today, so we are featuring him here on his 2005 Cracker Jack card, which was being released as his career was getting sidetracked. Here’s a look at this first-time set in our series. 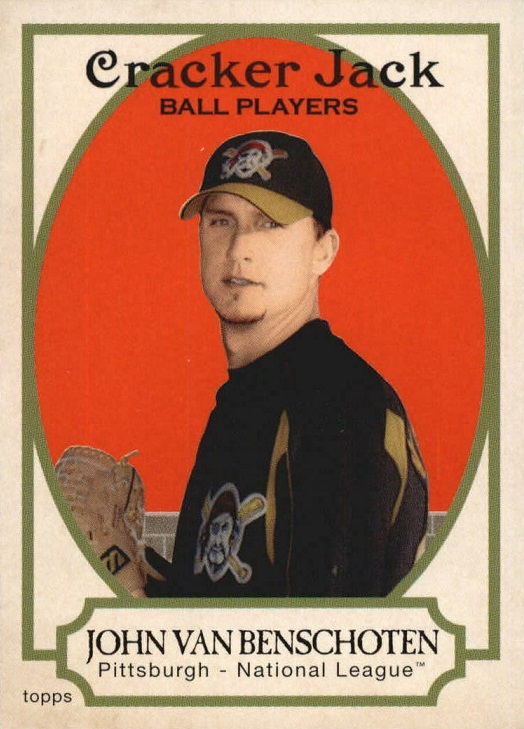 These cards share a little bit with the original Cracker Jack sets from 1914-1915, which are extremely popular to this day. The originals are also hard to find, so the combo of rarity and popularity, equals big prices for those cards. The fact that these cards had some similarities, and more importantly, shared the name, made them interesting to people who didn’t normally collect newer cards. The red background with limited  extra details (usually grass) can be found on all of the original Cracker Jack cards. Also the writing at the top saying “Cracker Jack Ball Players” can also be found on the 1914-15 cards. I guess you could also say that the white border and style of writing at the bottom is also the same, though it each case it looks much different because of how the rest of the card is set up. Basically, everything that is pea green there makes the cards look different, despite the similarities. The originals also had square photos, so that really changes the look.

I’ll note that I wasn’t a fan of the uniforms during this era, which is a bit odd to say because I really like the Pirates head over crossed bats logo, which is large on the jersey, and displayed on his cap. 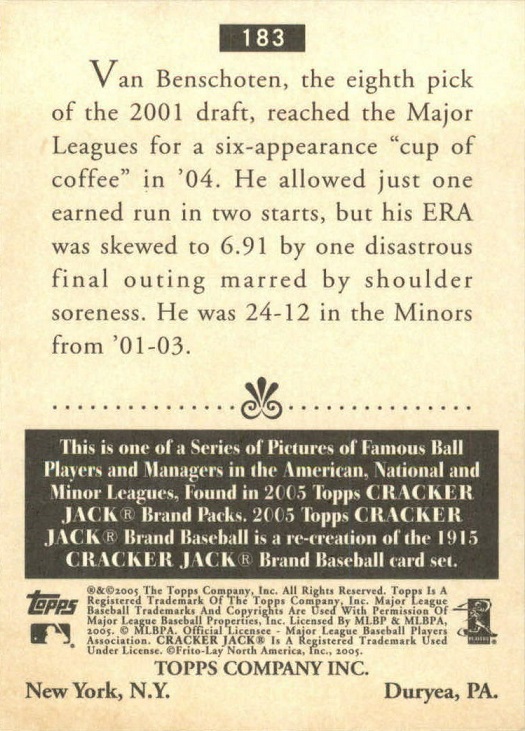 The back is a lot more like the originals than the front, except for all of that legal mumbo jumbo at the bottom, which is even more than usual because they had to use the Cracker Jack name so it required more legal words. The originals had a number up top, the bio section, something very similar to the writing in the black box, then the company name and location at the bottom, so they share a lot of the same looks and the setup.

Notice that the bio section mentions shoulder soreness, which was the start of his derailment. The bio is a bit misleading because it makes it sound like he was doing well before the final game. He had a 5.08 ERA in his first five starts, so it’s skewed a little by one game, but not to the point where it totally changed the look. He actually pitched great in his start before the injury, allowing one run in eight innings for his first big league victory.

If you’re interested in this card, there are a few versions to know about first. The regular card, which is what I used here, is the most common. There is also a mini red version and a sticker version, both of which can be found on Ebay now. Then there are three short-printed cards, blue mini (50 copies), grey mini (25 copies) and white mini (one copy). None of those are on Ebay at this time and you will probably have trouble finding them. Despite being tougher to find, the red mini and sticker prices are the same as the regular, and all you need to do is watch for high shipping charges from a few sellers. You can find all for $2 shipped in limited quantities for each at that price.