Today’s Card of the Day comes from the 2009 Upper Deck set. Not only is it the first time for this set and the first time for Pearce in this feature, it’s the first time that we have featured a set from 2009 since July 5, 2020. That’s a long time to ignore an entire year, but it happens. I promise that the third 2009 card will be featured here before Christmas of 2023. Pearce was a top prospect for the Pirates for a time, and he played five years with the team, so he has plenty of cards available. However, he only played 185 games in the majors during those five seasons. That was partially due to an errant throw from Delwyn Young in May of 2010 that put Pearce out of action for the rest of the season while he was doing his best hitting with the Pirates.

Pearce’s rise to the majors during the 2007 season was an impressive one, made better on paper by the fact that the Pirates had him repeat High-A Lynchburg when he should have been in Double-A Altoona to start the year. He started in High-A, but he finished in the majors, debuting on September 1st after tearing up the top three levels of the minor league system. He never stuck for a full season with the Pirates, and he really had his troubles during the 2009 season when today’s card was released, but that was the year that he saw his most time in Pittsburgh. Pearce hit .206 with a .665 OPS in 60 games that year. Here’s a look at his 2009 Upper Deck card, #821 in the 1,006-card set. 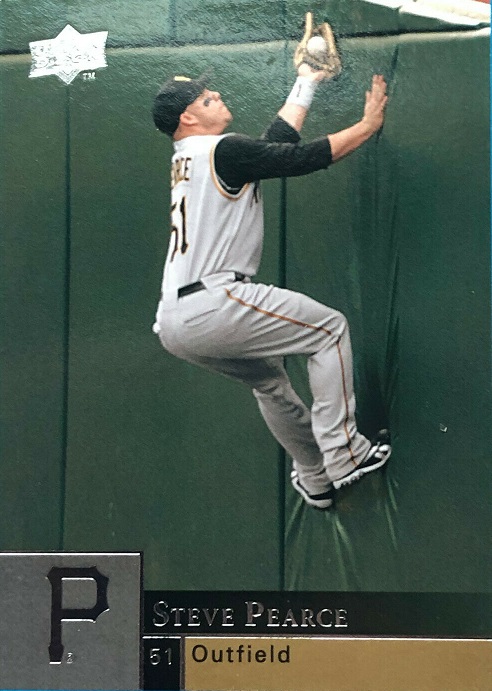 Kudos to the photographer who was able to capture this action shot, which appears to be Pearce making a catch up against a wall in foul territory. He was a first baseman in the minors, but the Pirates used him a lot in right field during his first two seasons, before he got time at first base in 2009 and beyond. I like the look of these cards, and the Pirates logo actually works in the silver and black, plus it goes with the road grays in this photo. The borderless photo look also works well. Overall this is a great looking card helped out by the photo, but the front design earns it points too. 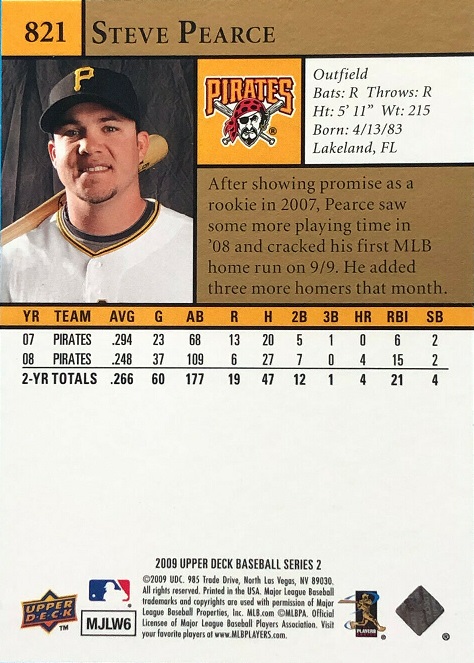 It’s funny that the same brownish color from the front that works so well with the silver and black look, is used on the back and it doesn’t go well with the Pirates colors from that time. I was a fan of that logo, but not of those colors on the jerseys. You get a second photo of Pearce here, a little bio section, and then they really lost points with me in the stats section. Look at all of that unused room! Pearce had seven lines of minor league stats at the time, so I think that they could have thrown those in there instead of doing absolutely nothing. Definitely a big difference here between the front of back quality.

This is a common card from a mass produced set, so it’s easy to find. You can get the regular card for under $2 delivered, just be sure to watch the shipping from sellers. The only two auctions of note are two autographed copies. One is for sale for $10, the other for $6.50 with a best offer option. I’ll warn you now that his autograph is scribble. I looked at it for about a minute and I think it says “Chel sD” (seriously). I would personally have no interest in it, but you might think it’s a perfectly cromulent autograph, so to that I say, to each their own. Happy collecting.