Today’s Card of the Day subject is Hall of Fame pitcher Vic Willis, who filled out his Cooperstown resume during his four seasons with the Pittsburgh Pirates. From 1906 through 1909, he compiled an 89-46 record, while averaging 302 innings per season. He helped the Pirates to their first World Series title during his final season with the team. It’s not that Willis was a bad pitcher outside of Pittsburgh, he just pitched for some very bad teams. His career record in his other nine seasons stands at 160-159. If he remained in Boston (current day Braves), where he played from 1898 through 1905, he would not be in the Hall of Fame, yet he could have pitched just as well during that time. The wins wouldn’t be there, and a .500 record isn’t getting you to Cooperstown unless you’re a reliever.

Willis did not appear on a lot of cards during his time with the Pirates. That’s because the card industry really took off during the 1909 season. Sure there were other cards produced between his debut in 1898 and the 1908 season, but it’s a fairly small list considering his Hall of Fame status. Just going with Pirates cards for Willis, you have seven choices total, so it’s best to space out his appearances here. One of those has been featured here already with his 1909 T206 card. Today we look at the 1909 E95 set produced by Philadelphia Caramel, which you sometimes see in the card title. The E95 name was given well after the cards came out, as a way to first catalog cards. The “E” stands for early candy cards, and the 95 was part of a random group of numbers assigned to the E sets. Here’s a look at the Vic Willis card from that set. 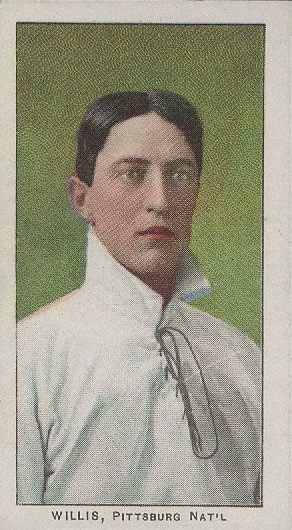 These cards were straight forward, no frills. White border, last name, city name (Pittsburgh was spelled without the H at that time) and the Nat’l for National League. Back then with only 16 teams, they had American/National League teams in New York, Chicago, St Louis, Philadelphia and Boston, so it made sense to identify the league for more than half of the teams. Pittsburgh, Detroit, Cleveland, Brooklyn, Washington and Cincinnati should have been self-explanatory.

These cards are smaller than your standard card size now, measuring 1-1/2″ by 2-5/8″. The fronts look a lot like the T206 cards, with some cards using the same photos for the artwork, but side-by-side you can see the differences from the different artists. Willis has a very similar look with the portrait-style pose here, though the T206 artist gave him more of a rounder face. What’s interesting is that the E95 went with a plain white uniform, while the T206 gave him a gray uniform and “Pittsburg” written across the front, which was not on the jerseys at the time. 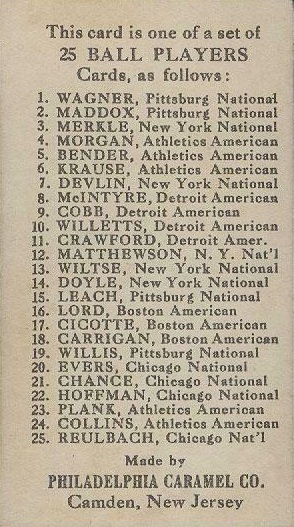 The T206 set has a full back ad for various brands of cigarettes. This set was small enough that they included a full checklist on the back. As you can see, they loaded it up with star power, featuring ten Hall of Famers, including some of the all-time top tier greats of the game in Honus Wagner, Ty Cobb and Christy Mathewson, whose name is spelled wrong on the checklist. It’s a bit interesting to note that they included five Philadelphia A’s players and zero Philadelphia Phillies. There was a big difference in quality between those two clubs, but both were local teams. If you look deeper, you’ll see that this set only includes six teams and you can’t find any of the two-team cities that are represented by both teams in the set. Neither St Louis team got into the set, though they were both seventh place teams at the time.

If you’re interested in getting a Willis E95 card, they aren’t that hard to find, but they are pricey, especially with the current jump in the vintage card market. There are seven options on Ebay right now and they range from the $3200+ card pictured above, which is a PSA 7, down to a $300 one that is an SGC 3, though it has a best offer option. An SGC 3 just recently sold for $202, while a PSA 4 sold for $450.