I haven’t featured any cards from 2022 yet and we are already 100+ days into the year, so what better player to start with than the Great One, Roberto Clemente. Topps has some special cards included in their packs this year that use the 1987 Topps front/back design. The interesting part about using that card design and calling it a 35th anniversary set, is that the 1987 set was a throwback to the 1962 wood-grain set and it was released on the 25th anniversary. So these 2022 cards are tribute cards of tribute cards.

Clemente is so popular that you can find new cards of him every year. He’s in multiple set this year. I got the idea for this article after seeing his Topps Heritage card, which uses the 1973 design, but I went with the 35th anniversary card because it’s a new photo. The Heritage card looks exactly like his 1973 Topps card, except for the Heritage logo. If you want to see the original, check out our Card of the Day article on it from November of 2020. Here’s card #T87-52 (card 52 in the 1987 Throwback set) featuring Roberto Clemente. 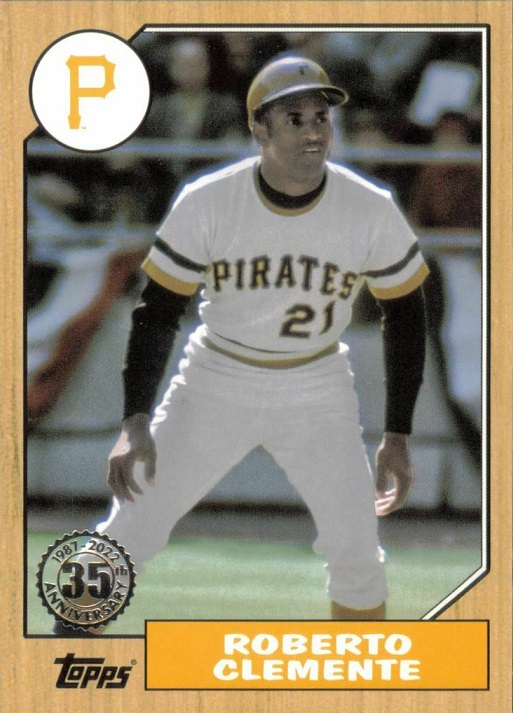 I really like this card, partially due to the throwback design to one of my favorite sets, but also because it’s a new photo of Clemente. If this photo has been used on a card before, I haven’t seen it (or I don’t remember it). Topps took multiple photos of every player they could get each year and had them all stored away in the Topps vault. Someone like Clemente probably got more photos taken each year than a common player, so Topps has been able to put out new photos of him on cards each year.

Those wood-grain borders, with the Pirates gold for the name box and the Pirates logo up top, really made this a great looking set when they came out, and it still looks great now. They looked better with the 1987 logo compared to the current boring idea, but it still looks better than any other team. The 35th anniversary stamp doesn’t detract from the overall look.

It’s interesting to note the bottom right corner of the photo. I really liked the original idea in 1962 with the curled up corner of a photo. Topps sort of used the idea in 1987, though they just cut out the corner of the photo (as you see above), instead of having it curl up. The two sets have a very similar look, but the subtle differences make them both so great. 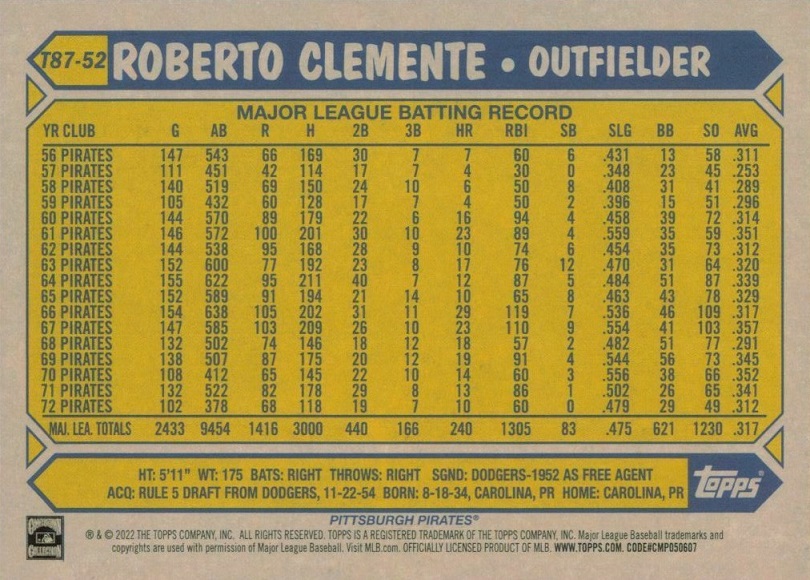 The back looks just like the 1987 Topps backs, except for some legal stuff at the bottom. The colors/setup/statistical categories are all the same. I really like that you have all of Clemente’s career stats here….hold up, wait a second. Ummm, they left off his rookie season for some head-scratching reason. I usually don’t condone using multiple question marks at the end of a sentence, but I believe three of them would be appropriate here.

That sure does look good when you see “Pirates” straight down the club column like that and no other team listed. Not too many players in team history can claim that with so many seasons. In fact, the list is just Willie Stargell with 21 seasons. Bill Mazeroski and Pie Traynor could match what you see up top with their 17 seasons in Pittsburgh, but that’s only because Topps left off Clemente’s 1955 stats.

If you’re interested in this card, you can get it from a few sellers for under $2 delivered. There are some variations with the card of note on Ebay right now. There’s a bigger one that is 5″ x 7″ in size and it’s a gold version, which was limited to ten copies. That’s going for $25 with a best offer option. There’s another bigger one with 49 copies printed (not the gold version) and it is $10, with a best offer option. Then there are gold and silver Mojo designs (you have to see them, they’re not for everyone) and those go around $6-$10 each, with silver versions going for slightly less. I prefer the clean look of the card scanned above, but to each their own.

11 Apr at 12:01 am
Card of the Day, Clemente Corner
Featured, Roberto Clemente