Today’s Card of the Day player is one who should have been featured in this series by now. Joe Gibbon pitched from the Pittsburgh Pirates from 1960 through 1965, then returned for the 1969-70 seasons. I’ll have to check soon, but anyone who put in eight (or more) years with the Pirates should be featured here by now unless they didn’t have any cards available. Gibbon had plenty of cards available, mainly just his yearly Topps cards, but there were enough choices that I scrolled through a few pages on Ebay before settling on this card.

As you will see just below, I picked this particular card because of something interesting I saw in the photo. Also, it’s been a little while since I included a 1961 card that wasn’t a special card in the set, such as the World Series recap cards, which have been here a few times. The last player card I used was Clem Labine just over eight months ago. Today we look at card #523, featuring Pirates pitcher Joe Gibbon. 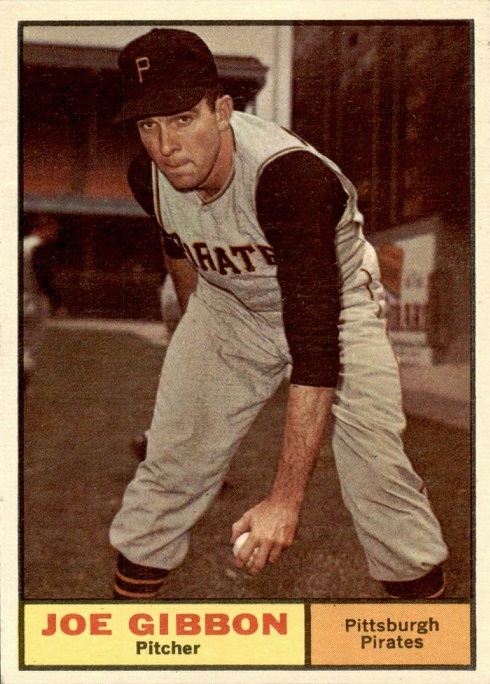 Topps is famous for their staged action photos and one of the most popular choices is when they feature a pitcher who looks like he just released the ball towards home plate, and usually they are staring off to the side of the camera. Not only is Gibbon looking right at the camera here, but he has a baseball in his hand. If this was supposed to be a staged photo of him in his follow-through pose of his delivery, then why does he still have a ball? This has more of a photographer saying “Hey Joe” then taking his photo as he picks up a ball and looks at the camera to see who called him.

The 1961 Topps set design didn’t have much chance for success. The 1960 cards have a great look with the horizontal layout and double photos, while the 1962 Topps set introduced the wood-grain border and curled up photo, making it one of the more popular older sets. In the middle is Plain Jane 1961 Topps with the name/position/team in two different color boxes at the bottom and nothing else. Looking past the strange pose here, that background of the outfield wall and stands is an outstanding look at back in the day baseball. 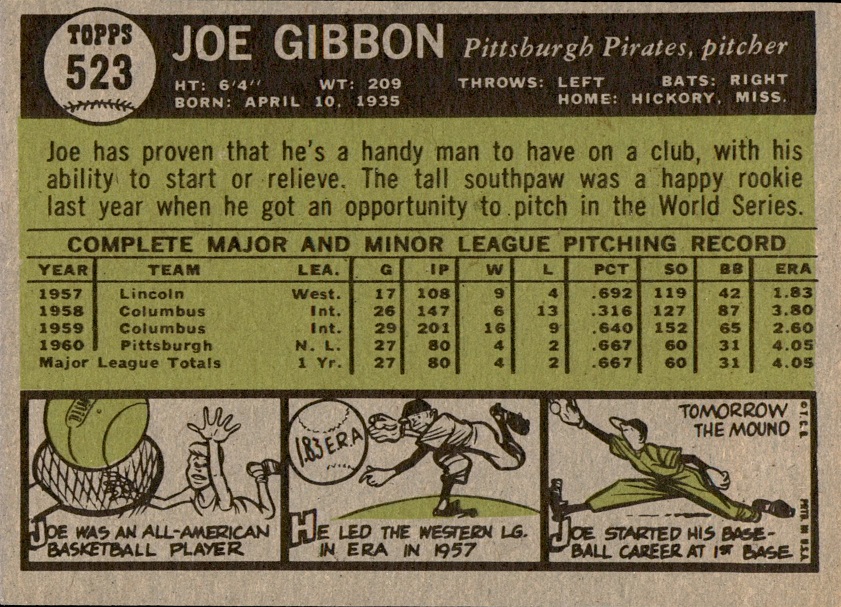 Generic gray Topps man was busy in 1961. Here he does his best to represent Gibbon three different times, as Topps went all in on the cartoons. Generic gray Topps man showed some versatility by also playing an All-American basketball player at the University of Mississippi. He actually made the All-SEC team in basketball and baseball in the same year, then won a minor league ERA title.

Those stats you see there are his entire career stats in pro ball. He made it to Triple-A quickly (Columbus), but once he got there it took him two full seasons to make the majors. Luckily for him, his first season was the year the Pirates won the World Series and he pitched 80.1 regular season innings, making nine starts and 18 relief appearances. He got to pitch twice in the World Series, though both appearances were late in one-sided losses.

I have some bad news with the price of this card if you want a nice copy. Topps used to print cards in series and the last series (referred to as high number cards) were always printed in much smaller numbers, making them harder to find and much more collectible today, regardless of the player on the front. Some high number cards are worth more than Hall of Fame players released earlier in the set. Gibbon is the first card in the high number series from 1961, which included cards #523 (Gibbon) through #589, though Topps pulled the evil trick of skipping numbers in this series, which led to people continuing to buy packs to try to find cards #587 and #588, but they didn’t exist.

Anyway, this card can get pricey. The most expensive one is extremely overpriced in my opinion, so I’ll start more reasonably with a high grade (ungraded) copy that has a $340 price tag. That’s overpriced as well, but more in line than the first one. A PSA 8 has an asking price of $305, but it has a best offer option. A PSA 7 is the next highest priced copy and it is $180, so that’s a large difference for one grade, but people will pay it. A PSA 6 can be had for $95, though that too has a best offer option. There are only 18 options available and the lowest priced one is $35, so you are probably better off waiting for a straight auction listing. Those will end in the $15-$20 range, as long as they aren’t high grade.

There are actually 41 completed auctions for this card in the last three months. You usually don’t see more completed listings than active listings, which just shows you how popular this set is, as well as how few copies Topps printed that year compared to the rest of the set.