On this date in 2001, the Pittsburgh Pirates played their first game ever at PNC Park. The pitcher that day for the Pirates was Todd Ritchie, so what better day (besides his birthday) to feature him here for the first time in the Card of the Day series. This is also the first time for the 2001 Fleer Platinum set, which was using a throwback design from the important 1981 Fleer set.

Ritchie was a key member of the Pirates rotation during the 1999-2001 seasons, putting together a 35-32, 4.29 record in 567 innings. He might be better known for helping the Pirates land Kip Wells and Josh Fogg in the same deal, which worked out great for the Pirates. Ritchie immediately went being a solid starter to going 6-19 in three seasons after the trade, while Fogg and Wells combined to make 247 starts for the Pirates. Today we focus on his time with the Pirates, looking at card #364 from the 2001 Fleer Platinum set. 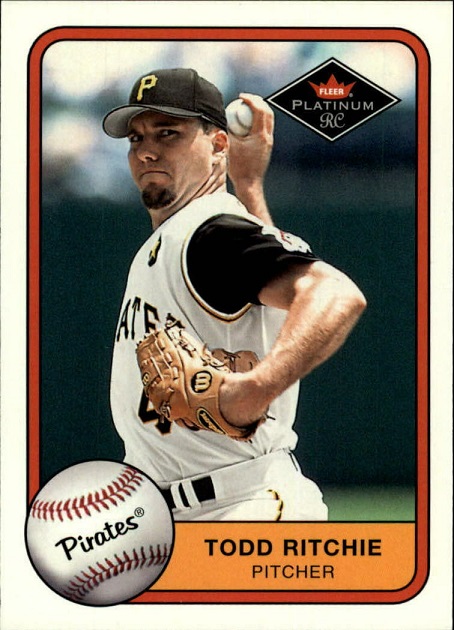 I’m a big fan of this set. I remember getting them new and Adrian Brown was the first Pirates card I received. The design of this set is extremely similar to the 1981 Fleer set. The border and photo frame are the same, as is the baseball with the team name and the player name/position in a box under the photo. The difference here between this card and the 1981 set is the color of the photo border and the box for the name/position. On the 1981 Fleer cards of Pirates players, the border and box are both yellow. Not every team had that color, but they did some matching up to the team colors. Technically they did that here too, as the Pirates had red and orange in the uniform colors at that time. Luckily that uniform is not in this photo of Ritchie, which is a great action shot. 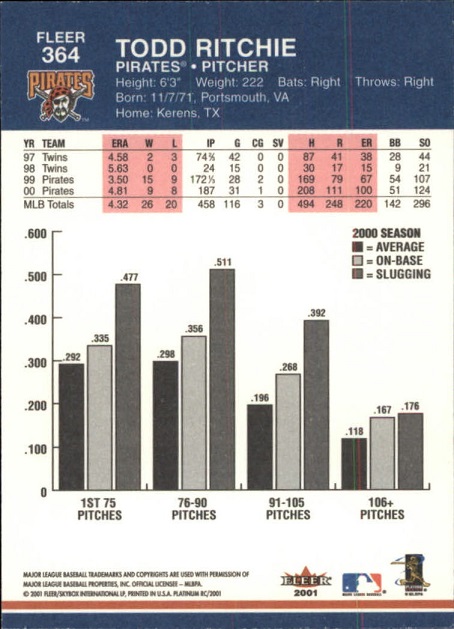 The back scan I used here has a funny story here because it’s something I try to avoid if possible. You’ll notice towards the right side of the card that it has scanner lines going from top to bottom, which show up more in the darker areas of that straight line. The funny thing is that I clicked on every link for this card on Ebay and all of them had those lines, which just means that people are using the generic scans provided by Ebay to make listings easier for some cards. One person had an autographed card, so I knew it wasn’t a generic card scan, but of course they only included front scans.

While Fleer used their 1981 design for the front, this back is nothing like the 1981 backs. Those cards have a horizontal layout and it’s all about stats. They also use grey, black and yellow for the colors. The backs here are reminiscent of the 1987 backs in look. I like that they included a color team logo on the back. That was not included in 1981 or 1987. This set had an interesting breakdown of how the pitcher did with certain pitch counts. They 1987 stat included some extra stats at the bottom, though it was a much different look than you see here.

If you’re interested in this card, there are seven copies available on Ebay. Six are just the regular cards and they range from $3-$5 delivered, with some people just having high shipping charges. Then you have the one autographed copy and it is going for about $19 with the tax and delivery included. Usually a card like this can be found for $2 delivered or less, but no one has it that cheap.