Someone on Twitter recently said that they wanted a Wil Cordero Card of the Day article, so today seemed like a good day to not only feature Cordero for the first time, we also take a look at the 2000 Upper Deck MVP set for the first time. I decided to use the Gold Script version of this card, which was limited to 50 copies. There’s also a Silver Script version that is tougher to find than the regular base card, and a Super Script, which only had 25 copies printed. A scan of that one wasn’t available, otherwise I may have used that instead. This set was a mid-season release (June of 2000) and it included 220 cards, not including the inserts. Here’s a look at card #143 from the set, featuring Pittsburgh Pirates left fielder Wil Cordero. 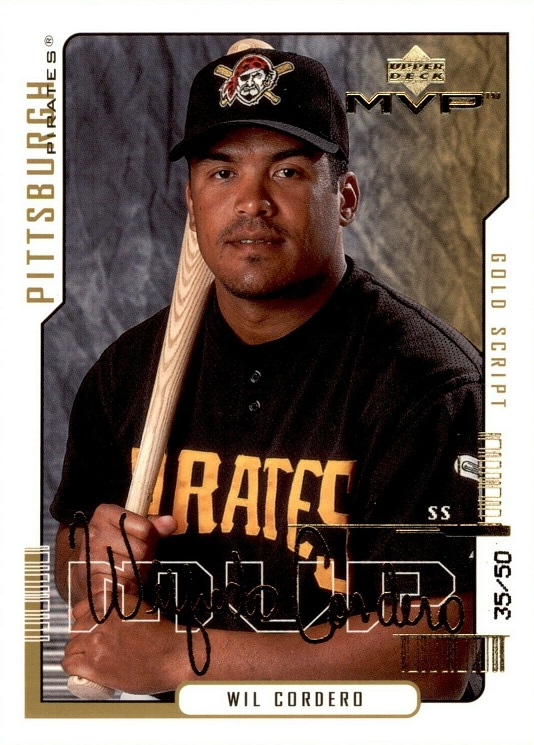 Off to the bottom right of the card, you will see “35/50”, which is telling you this is card #35 of the 50 Gold Script copies. The Gold Script part is his facsimile autograph there over MVP. As you can imagine, the writing is silver on the Silver Script, and it’s missing on the regular base card, so that “MVP” underneath the facsimile autograph here is in full view on those cards. This one also has Gold Script written on the side above the number. This set had an interesting timing, though the photos were obviously taken much earlier than the release date. The Pirates traded him to the Cleveland Indians in late July, so that means most people were pulling these from packs after he had already moved on to his new (and old) team. Cordero played for the Indians during the 1999 season.

I did not collect these cards back then, but it’s got a decent look to it. I’m not sure if I’ve ever said this about a set before, but the front is just a little too busy for me. There’s a lot going on with this card, so I’d probably rather prefer the regular base card. It’s a high quality photo, that’s for sure. It’s a bit strange that they listed his position as shortstop here because the last time he played shortstop at all was five years earlier. He came up as a shortstop, but he ended up playing more left field in his career. I think Upper Deck missed the boat on front with not including the logo, but… 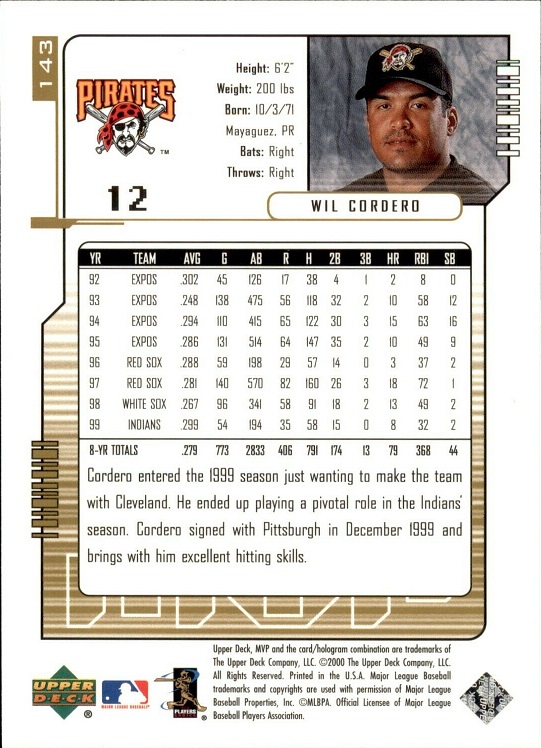 There’s that great Pirates logo from those lean years. I’m a big fan of that one, plus I like it on the hat as well. For those who have wondered because I always say I like the logos, I am not a fan of the overly cartoonish one that they used during the time when they won the 1960 World Series. I also dislike the current one, but most of the others rate high on my list. The 1910-14 logo is very plain, so that would be the third worst, but logos were mostly boring back then so it’s understandable. They came up with a great logo during the 1934 season, tweaked it a little in the late 40s, then ruined it (in my opinion) by taking three steps back with the 1958-66 logo. Fortunately for them, they followed it up with the best one (the yellow square that looks like an old poster, with a pirates face and Pirates on the bottom).

The back has a second picture of Cordero that looks exactly like the first, except for the bat is missing. Upper Deck went a little crazy with the bar code and weird random rectangles for the design, but it’s not distracting. They also went a little light on the statistical categories, but overall (front and back), it’s a decent looking set.

If you want one of these cards, you can get the regular base card, the Silver Script, or one seller has this Gold Script version. All are available on Ebay now. The one Gold card is $7.99 delivered, but it has a best offer option. There are five Silver Script versions available, with the cheapest one being $2 delivered. Watch before you purchase, because three of the other four have high shipping rates. As for the regular base card, it is also available for $2 delivered. Between the three options, there are 15 auctions total. Only one (a regular card) has sold in the last three months, and that was for $2.