Today’s Card of the Day comes from the cousin of my favorite all-time Donruss set. There’s no denying that the 1987 Donruss set has a great front design. The back leaves something to be desired, but that was typical of Donruss during that era. Today’s featured card is from the 1987 Leaf set, the up north cousin of Donruss, who looks the same, but speaks a different language. I decided to use the Diamond Kings card, which is #10 in the set, as opposed to his card from the regular Donruss set. Why you may ask? It’s because this was the first card I saw on Ebay while looking for a Rhoden card, and once a card catches my eye, I very rarely don’t use it that day. Really the only exceptions to that rule are cards I can’t find a good scan of that day.

The Pittsburgh Pirates acquired Rick Rhoden from the Los Angeles Dodgers for pitcher Jerry Reuss on this date in 1979 and he single-handedly led the Pirates to their fifth World Series title. Okay, that part isn’t true, the trade actually hurt the Pirates chances because he was injured and ended up pitching once all season, while Reuss had a 3.54 ERA in 160 innings. Rhoden went on to be a solid starter for the Pirates through the 1986 season, before the Pirates used him as a key part of the deal with the New York Yankees that landed them Doug Drabek. These 1987 Donruss cards were coming out just after the trade with the Yankees was completed, so he wasn’t even with the Pirates when people were getting this card in packs and sets.

Rhoden has also appeared in this series on a 1987 Topps Mini and 1986 Donruss Highlights.

Here’s the front of this card: 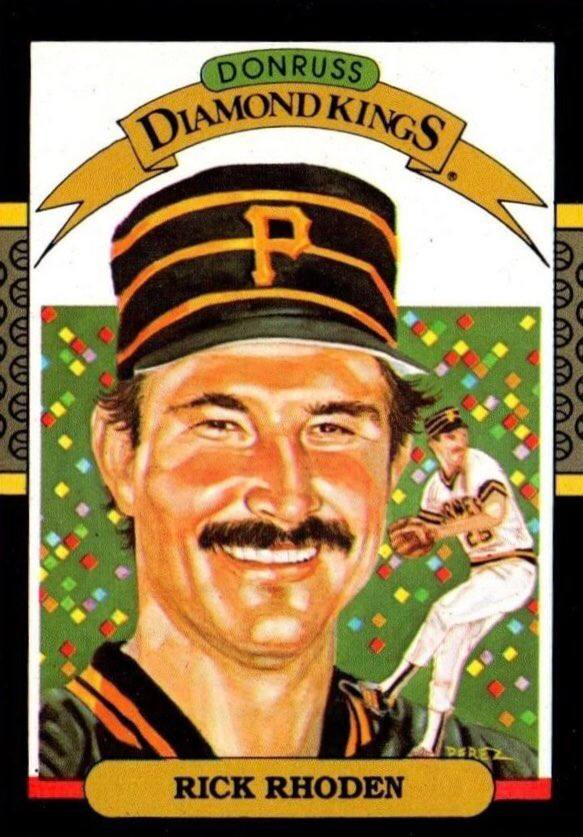 If you don’t know about the Diamond Kings subset from Donruss, it was something that they did every year from 1982 until 1991 as part of the Donruss set, then they started including them as inserts. The artwork was done by Dick Perez, who did the entire ten-year run as part of the sets, then went on for another five years. Each Diamond Kings card included an action shot and a bigger portrait version, which is what you see above. The backgrounds were all different for every card, so you can imagine that there are some odd ones like what you see above. My first thought was rainbow confetti. I really love the 1987 Donruss design, and it looks especially good with the Rated Rookies cards (Bo Jackson, Mark McGwire and Greg Maddux are three that come to mind right away from this year). The border design also works great with the Pirates colors, as you can see here with Rhoden. 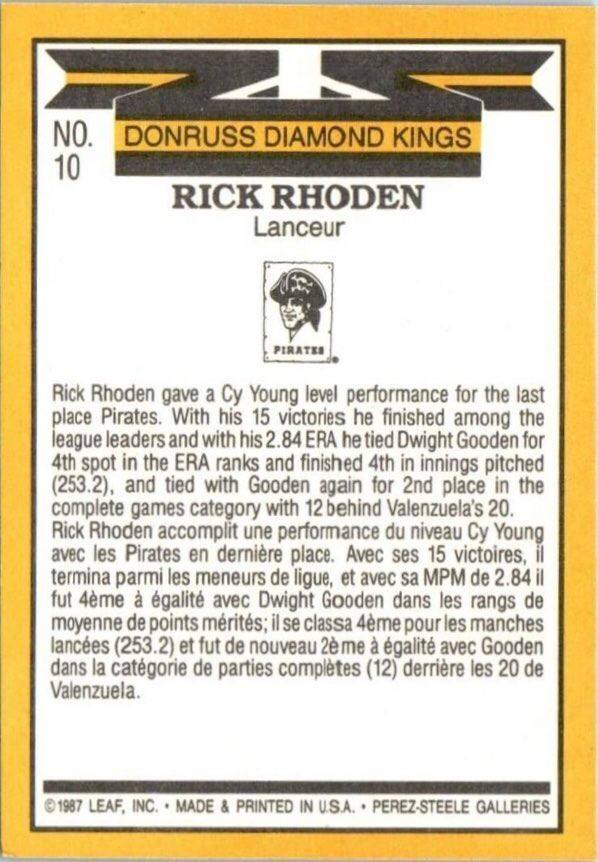 The back here has a lot of French on it, as they included the regular English version from the Donruss set, then translated it for the Leaf set. I did not know that “Cy Young” translates to Cy Young. Very interesting. Also, excellent use of the great Pirates logo from that era. That logo is on the front of the regular cards in the set, but since Diamond Kings didn’t include logos in the artwork, they put the team logo on the back. One of the other notes here is the date on the bottom. Donruss always had the previous year on the back because that’s when the cards were actually printed, while most cards go with the year of the set, which is what you see above with the Leaf version. The back of a regular 1987 Donruss card has a 1986 copyright date.

If you want the Leaf card, there aren’t many options available on Ebay, but enough that you have multiple options around $2 delivered. There are no auctions of note (autographs/multiple cards/graded), so this will be a short price section. You could also just get the regular Donruss version, which is also a card that can be had for under $2 delivered, but that one has two autographed versions ($17-$21) and a Super Diamond Kings, which were 5″ x 7″ in size and available as a mail in. The one listed is for sale for $6, with a make offer option.