Today’s Pittsburgh Pirates Card of the Day features Hall of Fame pitcher Bert Blyleven, who pitched for the 1978-1980 Pirates. He turns 71 years old today. He doesn’t have a ton of options for cards showing him on the Pirates due to his short time with the club, but we have already used three of them before today, with a little bit of a twist. Exactly one year ago, we featured his 1978 Hostess card. In the previous appearance here, we took a look at both his 1981 Fleer and 1981 Donruss cards, choosing to feature both cards at the same time because he looks so different on the two cards that were printed in the same year. Today’s card doesn’t look like all of the others, as the 1980 Kellogg’s set was different in size, feel and look, as you will see below. Here’s card #5 from that set, featuring the great Bert Blyleven. 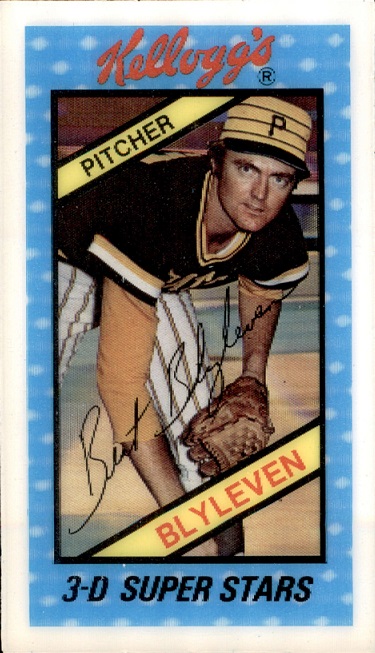 You can tell by the shape of the scan here that this isn’t your average card size, though without a regular card for comparison, it might be hard to really tell the difference. These measure 1 -7/8″ by 3-1/4″, compared to 2-1/2″ by 3-1/2″ for standard sized cards. That size difference might be the least different thing about these cards. They came with 3D photos, as indicated by “3-D SUPER STARS” written under his picture. They weren’t printed on cardboard either. The backs of the cards have a smooth feel, but the front has a bit of a texture to it.

Kellogg’s had some great photos, though this one looks like they shoehorned him into the smaller frame. They went with just the last name of players on the front and they included a facsimile autograph. Blyleven really rocked the mix-and-match jerseys on this photo day. 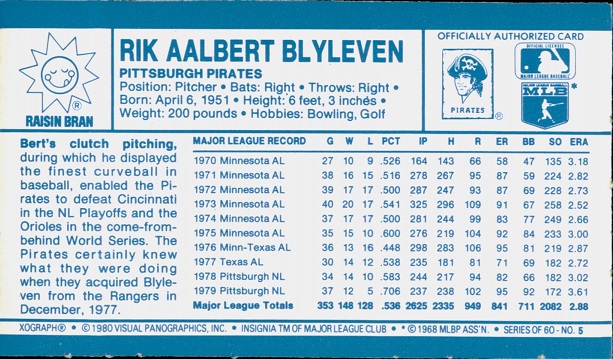 The back includes an ad for Raisin Bran in one corner and all of the MLB-related logos in the other corner, so you know that this is an “officially authorized card”. The Pirates logo from that era is always a welcomed sight. I love how the bio for him doesn’t even dance around with his curveball by saying something like “one of the top curves in the game” or “possibly the best curve”. They just went right out and said it’s the best. Honestly, it’s hard to argue with that statement. If you ever watched him live back in the day, or watched video of his pitches now, you won’t doubt the curve.

As you can see in the stats, he started his career with ten straight double-digit win seasons. He went 8-13 in 1980, so the streak stopped there. He wasn’t on the downside at that point. Blyleven still won 17+ games in four seasons after 1980. He had also already surpassed 2,000 strikeouts by this time, on his way to the fifth highest total ever (3,701).

The bottom says Xograph, which I believe was either the type of photography used or an ingredient in Raisin Bran from the 1970s. It also lets you know that there were 60 cards in this set. They came in plastic wrap inside cereal boxes, but it’s almost impossible to still find them in that wrap.

If you’re interested in the card, you have plenty of options, including a PSA 10 Gem Mint copy with an asking price of $169 delivered. You can get a PSA 9 for $61 with a best offer option, or $65. I’d go for the lower price. If you don’t need a fancy graded copy, then you can get a nice looking example for around $5. These cards can curl up a bit and crack, so check the scans closely before purchasing.