Today’s Card of the Day player choices came down to Rennie Stennett and Bill Robinson. As seen in today’s Pittsburgh Pirates History article, Stennett was born on this date, while the Pirates traded for Robinson on this date. I went with Robinson because he’s only been here once and I owe him for featuring his awful 1977 Topps card (all of the cards are awful, not just his in particular). Stennett has been here twice already, and more recently, but we will have him here again, so don’t worry.

While deciding which card to use today, I realized that I haven’t used a 1982 Donruss card in nearly two years here, and the only appearance for that set was a coach (Harvey Haddix). So this is the first player on a 1982 Donruss card to make into this series. This is card #402 from that set, featuring Bill Robinson. 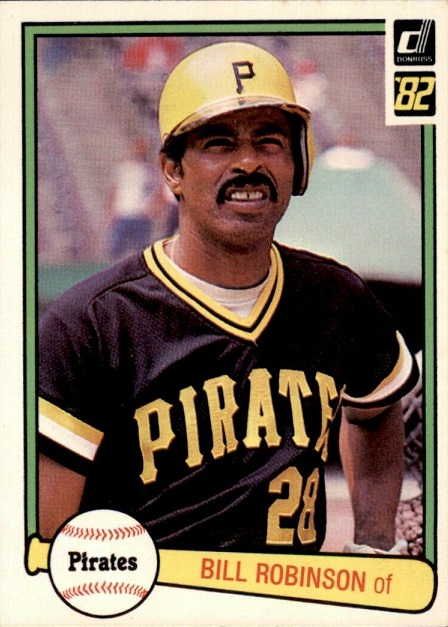 By the time this set rolled around, Robinson was near the end of his 16-year career in the majors. At 38 years old in this photo, he was almost old enough to be a coach, but he was still a pretty good player in 1982. He put up a .768 OPS in 66 games that year, though half of the season was spent with the Philadelphia Phillies, so this is the last year that he appeared on cards with the Pirates. You have to love that jersey/helmet combo, which is required to like by law if you’re a Pirates fan.

The 1982 Donruss set design is a mediocre look. The bat and ball look like the plastic ones kids get (not wiffle ball, the earlier ones that are bigger). The thin green border around the photo isn’t green for all teams, but for some reason, they gave it to the Pirates and a few other teams. When I get a time machine I’m going to ask them why they didn’t use yellow/gold for that photo border. As I said, this was an okay look, but then Donruss basically repeated it in 1983, with just slight changes, with the ball becoming a glove and set logo changing sides (and it says 83 obviously). The 1983 Donruss design has to be in the running for worst ever, with apologies to the 1977 Topps set for suggesting that another set has a chance at the title. 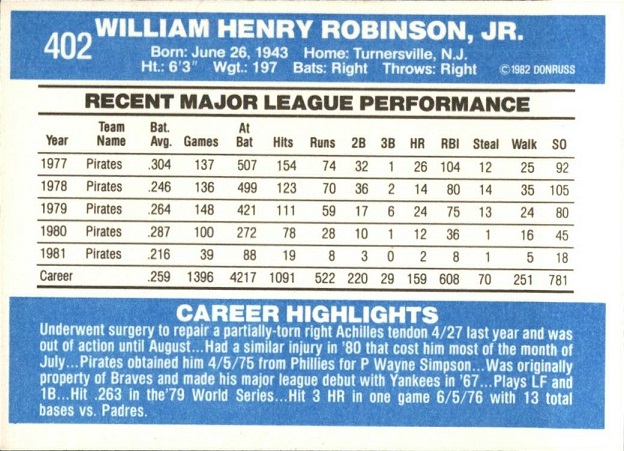 The back of these cards are much different than the backs of the 1981 Donruss cards, which we looked at just a few days ago with John Milner. That first year they just used one year of stats and had a list of career highlights. In 1982, they went to a model that they used for a long time, putting five years maximum of stats and then the career highlights in the bottom section. That bio section has an error. Robinson made his big league debut with the 1966 Braves, not the 1967 Yankees.

Donruss using just five seasons of stats leads to an interesting note with Robinson and stolen bases. By the looks of it, three straight seasons late in his career with double-digit stolen base totals suggests that he ran a lot, then stopped running due to those two injuries mentioned in the highlights. However, look at that career total. He stole 39 bases in those three years, but he had just 32 steals in his other 13 years combined, and he basically had a 50% success rate during those years (32-for-62). His success rate was nearly 70% during that strange three-year stretch. Makes me wonder what other batter has his first 10+ steal season ten years into his career or at his age (he was 34 at the time).

If you’re interested in this card, then you’re in luck because the internet has a magical place called Ebay, which has 54 auctions for this card, many of them autographed by Robinson, who passed away in 2007. The most expensive is authenticated, and it is going for $28, though it has a best offer option. The cheapest autographed copy is $11. Robinson has a nice signature, but the 1982 Donruss card isn’t the best for his autographs due to the black jersey taking up so much of the card. It hides the autograph in most cases. If you want an autographed card from him, I’d suggest another set. About ten sellers have this card for under $2 delivered, including the sales tax which I sometimes forget when I’m writing up these articles.