Today is the second appearance in our Card of the Day series for Manny Mota, who was an outfielder for the 1963-68 Pittsburgh Pirates and also one of the best pinch-hitters ever. His last appearance was on his 83rd birthday last February. So it’s been a little bit of time since we featured. It has been even longer since we used the 1965 Topps set. That set last appeared here back in October of 2020, and that wasn’t even a single-player card. You don’t have to go back much more to get the last 1965 Topps featuring one player, but it has obviously been a long time for a set that is highly collectible to this day. So today we end two streaks by presenting to you, card #463 from the 1965 Topps set, Manny Mota. 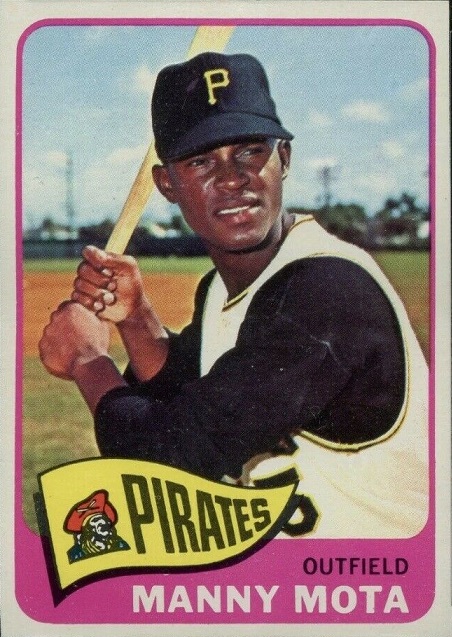 This is one of my favorite photos of Mota with the Pirates, but not one of my favorite cards. I’m not a fan of the pink border that Topps used for the Pirates players this year. They didn’t use it for all teams, but they used it for all of the Pirates players. The get some points back with that very cool pennant, featuring the earlier team logo. The Pirates switched to the overly cartoonish Pirates logo by this time, but Topps decided to use the older team logo that they stopped using in 1958. Excellent choice by Topps, otherwise I’d probably hate the look of these cards because I am not a fan of the 1958-66 logo.

I mentioned that I like the pose here and it’s because three of his five Topps cards with the Pirates are basically the same close up portrait style shots. The only other different one is from the 1968 set, which is a posed swing follow-through, but the 1965 card has better photo quality. 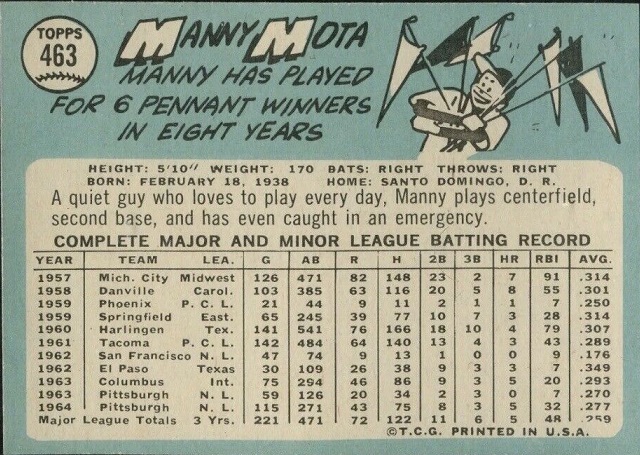 There’s generic gray Topps man, who looked like no baseball player ever, yet he represents every player. Here he’s holding six black and white pennants, which represent the six pennant winners that Mota played for in the last eight years. The San Francisco Giants won in 1962, but the Pirates obviously didn’t win anything in 1963-64, so five of those pennants were in the minors. As a side note, Mota had ten career postseason plate appearances during his 20 seasons in the majors.

The back notes that he caught in an emergency. While that’s true, it happened one time in his career for two innings. The Pirates had three catchers at the time. Jim Pagliaroni started and left late in a close game for a pinch-runner. Smoky Burgess was used as a pinch-hitter, so that left Orlando McFarland, who had to leave after Lou Brock crashed into him during a play at the plate in the ninth inning, though he toughed it out for one inning before leaving. Mota said that he once played catcher in winter ball, so he went behind the plate. As a side note, Willie Stargell was also injured (twisted knee) in that game.

If you want this card, you can get it in almost any condition you want, with numerous examples in almost all grades. The most expensive one is $100 for a PSA 8, though I’d suggest not buying that one because there’s another for $44, with a best offer option. If you don’t need PSA, but want high grade, there’s an SGC 88 (PSA 8 equivalent) and it’s only $28. That one seems like a great buy, especially considering that there are PSA 6’s and 7’s listed for more money. If you’re okay with ungraded, which many people are, then you can get a really nice one for about $18 delivered, with many options within a few dollars of that price.

There’s an autographed copy for $15 (with a best offer), but it’s a rough signature. That’s not a knock on Mota, more that it’s in pen and part of it goes into the black sleeve. There’s one signed in blue marker that’s an even worse placement, with about 90% of the autograph in his black sleeve. Another has the same placement, but the card seems a little faded and it’s bold blue ink, which you can read without straining your peepers. That one is $12. If you just want a plain old example for your growing Pirates collection, the cheapest one is $3.50 delivered. There are 125 auctions for this card currently up on Ebay and 41 copies have sold in the last three months. The highest price was $36 for a PSA 8.