Today’s Card of the Day subject is a player who I thought had already appeared in this series before, but I just found out that this is his first time. I fooled myself by using a picture of one of his cards for the article photos in the past. I saw the card scan and assumed it was for a Card of the Day article. In fact, I used that photo for the This Date in Pittsburgh Pirates History article from today.

Today is the 41st birthday of Ryan Doumit, who mostly played catcher for the 2005-2011 Pirates. He played in an era where they are a large number of options for today’s featured card, so I just scrolled through a site called Ebay until I found one that really caught my eye. As usual when I do something like that, I found a new card using a throwback design. This design goes back to the early days, to one of the best looking sets from any era in my opinion. Here’s a look at the 2010 Topps Turkey Red Ryan Doumit. 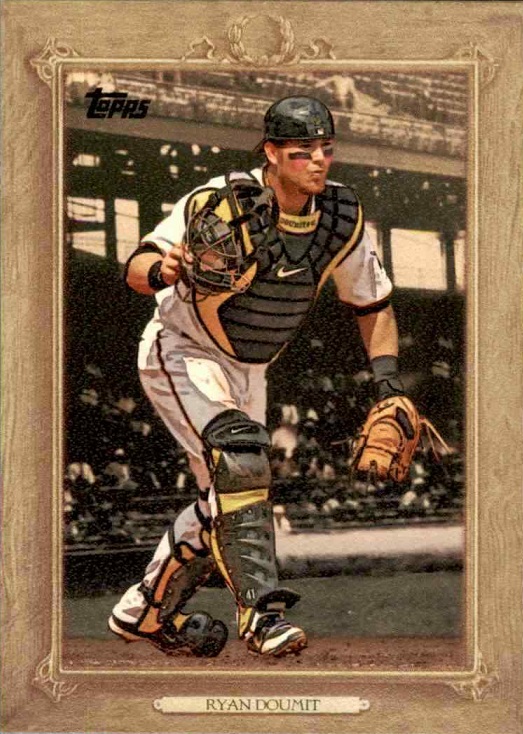 The original Turkey Red set produced in 1911 is referred to as the T3 set in the American Card Catalogs and it also included boxers, though they are cataloged different (T9). The “T” stands for tobacco, and it’s a group of cards that were released in the early 20th century by tobacco companies. Most everyone who knows cards, knows of the iconic T206 set with the million dollar Honus Wagner card. The T3 set has a similar look and shares some photos with the T206 set, but that’s where the similarities end. There is a huge difference in the size of the cards, with T206 cards being much smaller than your average card you pull out of packs today. The T3 set is much bigger, listed as being 5-3/4” x 8”, plus they are thicker stock.  They are not easy to store at that size, especially when they are in grading company holders BUT they make a beautiful display piece on their own. I only have one in my collection, Pirates pitcher Howie Camnitz.

This Doumit card looks like it is right out of the original T3 set, with the ornate frame around the photo, the great artwork for the photo, and the name looking like it was engraved on a piece of metal attached to the frame. What really gives it to old school look is the crowd in the background, looking like it was pulled from the early days. This is a great action shot of Doumit getting up from behind the plate to perhaps get involved in the play. I’m a fan of a nice action shot of catchers. Always looks better than any other position. This card is your average sized card, same as you would get out of most packs of cards now. 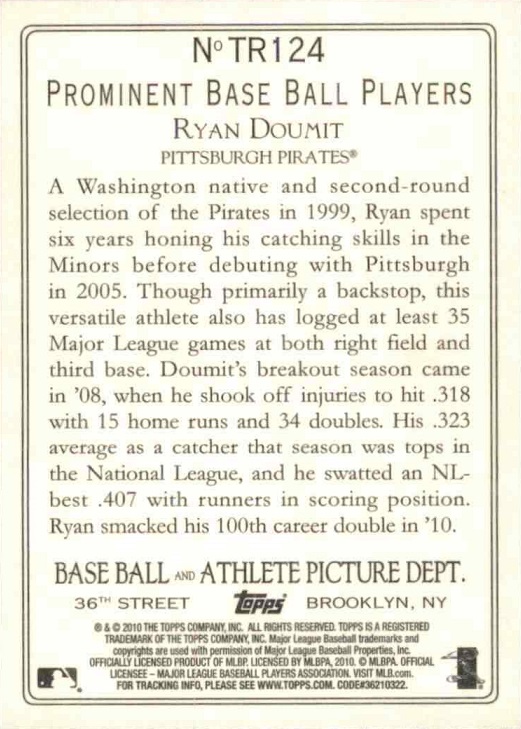 The back is set up just like the original Turkey Red set, except for all of the legal stuff and logos at the bottom. Those always take away from the old school look for me, but the rest of the card did a good job replicating the original, though they didn’t have player bios. Some of the originals had checklist backs, while others were just a large ad for Turkey Red Cigarettes. Some of those old cigarette/tobacco back ads are great looking, but it was a good idea to get rid of them, especially since it was mostly kids collecting the cards.

If you’re interested in this card, you’ll be happy to know that there are 18 on Ebay right now and they can be had for under $2 delivered. Most sellers have it for a little more due to shipping, but no one is asking more than $6 total. Happy collecting.