Today’s Card of the Day is our first look at the 1995 Upper Deck set. Today’s player is making his second appearance in our series. Jon Lieber was featured here back in December on the anniversary of his trade to the Chicago Cubs in 1998. That day we looked at his 1996 Leaf Signature Extended Autographs card. Today is his 52nd birthday, so we celebrate with a new set that pictures him during his rookie season in 1994.

Lieber played five seasons for the Pittsburgh Pirates, where he picked up 38 of his 131 career wins. The Pirates were trading away two seasons of his service time before free agency, but he signed an extension to stay in Chicago after the 1999 season and ended up going 20-6 during the 2001 season, making the All-Star team for the only time and finishing fourth in the Cy Young. Today’s card takes us back six years from his big season, and it comes from the year that he really struggled in Pittsburgh, as you will see below. Here’s card #146 from the 1995 Upper Deck set featuring Jon Lieber. 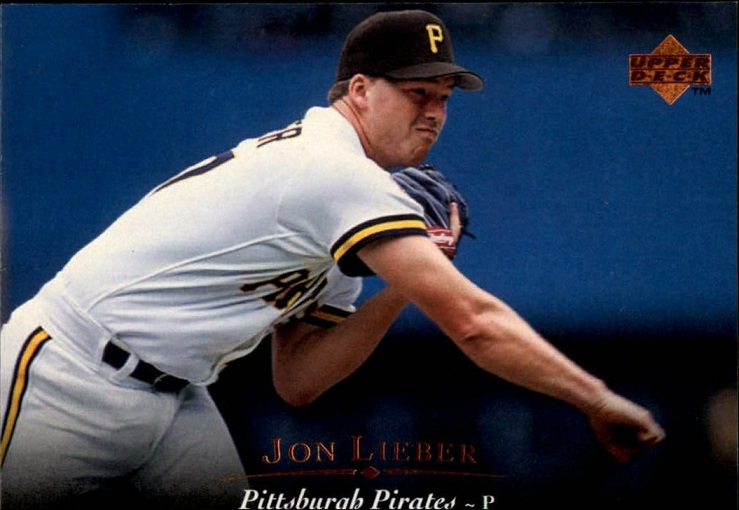 Upper Deck went really simple this year, using a design that gained a lot of popularity during this time by not using any borders at all for the card. They included full photos on the front, interrupted only by a small logo in the upper right side and his name, a little separator design, and the full team name, along with the abbreviation for his position. I don’t know if it was just coincidence or not, but I noticed quite a few horizontal layouts from this set, but it seems like the majority are the typical vertical photo layout. 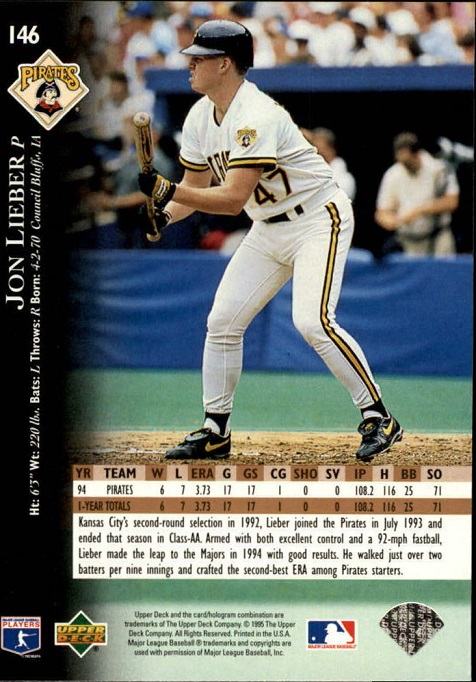 I like the back of the card better than the front. I like the photo better as well, but I think that has to do with the background, as it seems like the front just got a lot of the outfield wall in the background, so it’s a rather plain look. That’s not the exact reason that I like the back better. The Pirates logo obviously helps, but the fact that the back actually has a design and it’s something different, gives it a good look. Using chocolate for the stat colors is a bit odd and makes me want chocolate, but it’s fine. The little bio section could have expanded on how Lieber joined the Pirates. He was part of the return when the Pirates traded away Stan Belinda.

Lieber had a decent first year during the strike-shortened 1994 season. That’s a nice ERA for a rookie, and his record is indicative of the team he was playing for that year. The Pirates were bad in 1995 too, but Lieber was worse, posting 6.32 ERA in 72.2 innings. His last three seasons were all solid middle/fourth starter type years, as he totaled 7.0 WAR during the 1996-98 seasons.

There are a few options if you’re interested in buying this card. The most expensive is an autographed copy for $20 delivered, but I’ll warn that Lieber has an absolutely terrible autograph. It looks like a little kid drew on the card. It’s as bad as any current player, and if you collect 2022 autographs, you know current players look like they write with their feet. Lieber’s autograph can be had for as low as $3-$8, but that doesn’t make it any better. The next highest priced card is an Electric Diamond Gold insert that is going for $15, but that too has lower priced cards available for around $3-$6 with multiple examples. There’s also a Silver Electric Diamond version, which is easier to find, for about the same price range. If you just want the regular card, the standard rules for common cards on Ebay apply here and you should be able to get one for under $2 delivered.