Today’s Card of the Day comes from the oddball 1983 Donruss Action All-Stars set. It consisted of 60 cards and they were about twice the size of an average card, measuring 5″ by 3 1/2″, with a two-photo setup, laid out horizontally. Our featured player today is Jason Thompson, Pittsburgh Pirates first baseman from 1981 through 1985, who is making his second appearance in this series. He was acquired By the Pirates on this date in 1981 in a trade that included Ed Ott going to the California Angels. In fact, Thompson’s only other appearance in our Card of the Day series was one year ago today when we looked at his 1983 Drake’s card. Just like that Drake’s card, today’s offering is another card that wasn’t part of the big three factory sets of the time, but it’s an interesting offering from the early 1980s. Here’s a look at card #8 from the Donruss Action All-Stars set. 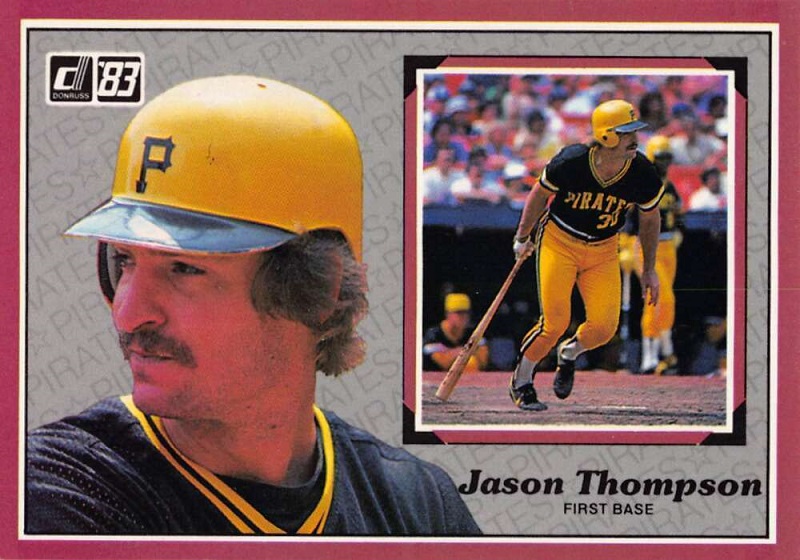 This set has a bit of the 1955/1956 Topps set in it, with the portrait style photo bigger in front, along with a smaller action photo. They also used the horizontal layout. There are enough differences that it’s only a partial match in looks. The background saying the word Pirates over and over is something different and it works here. The frame job around the action photo is also different and adds a nice touch. The card has a solid overall look, and those uniforms from this time period really make that action shot stand out, especially the added background Pirates. 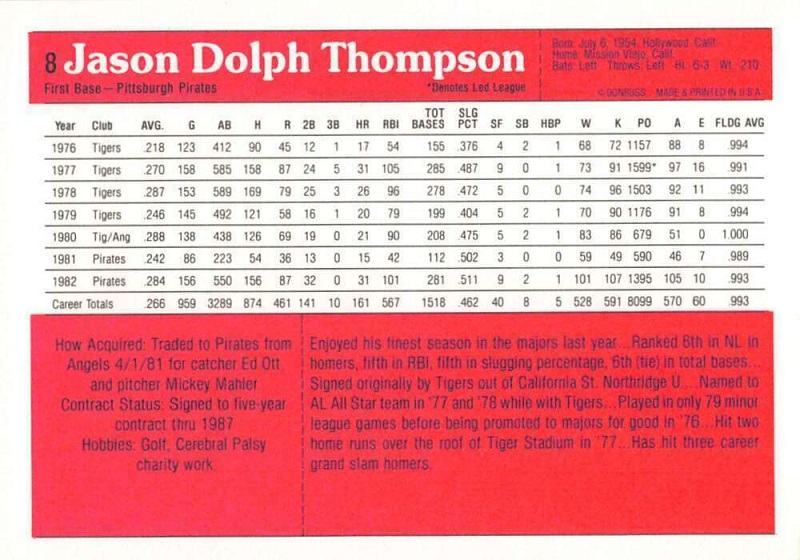 The red on the back is quite bright. I should have warned you about that I guess. I’ll get you next time. Donruss decided to go with just the big league stats, but they got his entire Major League career in there, while the regular 1983 Donruss cards only had the last five years maximum. With the horizontal layout mixed with the bigger card size, they had room for more categories of stats. The regular series cards had 12 categories of stats, which were the first nine rows of stats you see up top, plus stolen bases, walks and strikeouts. So that means that all four of the fielding categories were added here, as well as slugging percentage, total bases, sacrifice flies and hit-by-pitches.

There’s a nice little section of bio information, as well as the extremely help contract status section and they “How Acquired” section mentions his trade to the Pirates. The bio section informs you that the only stats that are missing from his pro career are his 79 games in the minors. It was split between 75 games in Double-A in 1975 after he signed, and just four games in Triple-A before he joined the Detroit Tigers in 1976.

If you’re interested in this card, there are 18 auctions up and not every one includes the “Action All-Stars” part of the set title, so you’re better off searching “1983 Donruss Jason Thompson” and weeding through his regular Donruss cards from that year, which make up a little more than half of the listings. There are a few options for this card at $2 each delivered, but there are also three auctions of note. Two of them are autographed copies, priced high in my opinion at $25 and $30 each delivered, though both have best offer options. The other option is an unopened pack that has Thompson on the front and Bill Buckner on the back. There are also four other unknown cards in the middle and a part of a puzzle that forms a Mickey Mantle picture. That auction is $14.99, with free shipping and a best offer option.