Today’s Card of the Day doesn’t have anything to do with the history article from this date. That’s partially due to the availability of options for the six players mentioned today. I decided to write about a player and set that I haven’t mentioned recently and the 1981 Donruss card of John Milner covers both bases. It’s been 13 months since this set has been used, and Milner hasn’t appeared in this series since December of 2020, when we looked at his 1981 Topps cards. That link is something that you’ll want to click because it’s an interesting comparison to see the photo that Topps decided use for Milner, and the one that Donruss decided to use in their first baseball card set. Here’s a look at card #377 from that 1981 Donruss set, featuring Pittsburgh Pirates first baseman/left fielder John Milner. 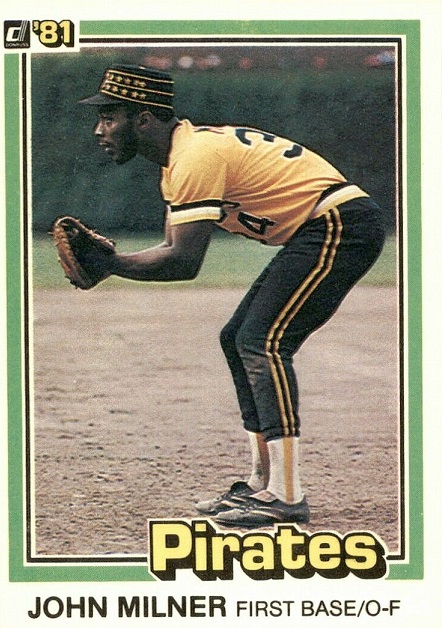 I sometimes wonder if I’m too harsh of a critic for the 1981 Donruss design. I usually think that they want to make a big splash in their first year, but this set doesn’t do that to me. This really feels like something Topps would have put out in 1981, because their run from 1977 through 1980 isn’t the best for designs (it might be the worst), but then Topps pulled out the 1981 design, which is one of my favorites. It surprises me a little that Donruss lasted through their first few years because their 1982 look wasn’t great, then they basically repeated it in 1983.

In a way that lackluster start sort of helped them, because the 1984 Donruss set wasn’t printed in the numbers of Topps and Fleer, which made it a lot more popular once Don Mattingly became a superstar in New York. Old price guides note that Mattingly’s 1984 Donruss card was going for $100 each if you could find it. Donruss would soon make waves with their 1987 design and then they were part of the card boom in 1988 when they massively overprinted their cards, making them extremely easy to find 34 years later. That progression all started with the set you see above.

I mentioned that you would want to check the 1981 Topps link for comparison to this card. Topps used the same exact pose, just a closer up photo that is cropped just above the knees and cuts out some of the backside of his body. What I really like with the two cards is that they got the opposite colors. Black cap vs gold cap, gold jersey vs black jersey, black pants vs gold pants. Look at all of those Stargell Stars on his cap. Good job, Mr Milner. 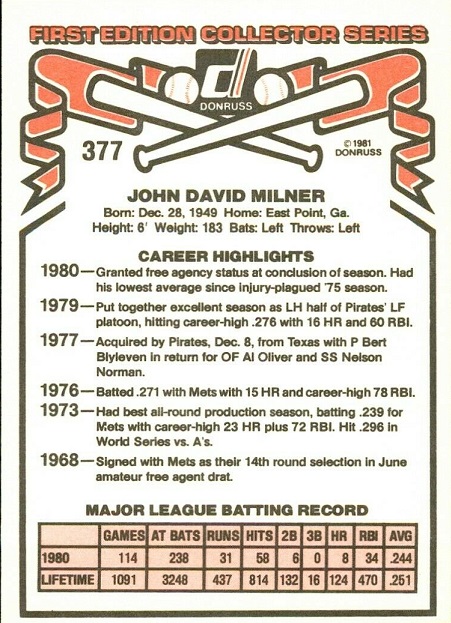 I usually like seeing each year of stats, but you can get those on Milner’s 1981 Topps and Fleer cards. I like what Donruss did here, but they only did the career highlights like that for their first year. In 1982, they switched to a maximum of five years of stats, but still had some career highlights in a little bio section at the bottom.  Donruss went rather plain on the front, then went fancy with the back design up top. It wasn’t a bad first set, except for one thing that actually helped out their popularity a little, though I don’t believe it was intentional. They made a lot of mistakes on the backs of cards and then corrected them. For set collectors, sometimes they want the master set, which includes all errors. For this set, I believe that it adds an extra 38 cards that they need.

If you’re interested in the Milner card, there’s nothing of note on Ebay right now. No graded copies, autographs or auctions with multiple cards. You can find this card for as low as $1 delivered from multiple sellers, with the average price being $2 for an auction. As usual, just watch out for unnecessarily high shipping charges. I think some bigger sellers do that so people buy in bulk and they aren’t just mailing out one card at a time.