Today’s Card of the Day comes from an Upper Deck product put out in 2004 called SPx. It features Mike Johnston, a 1998 draft pick of the Pirates, who debuted with the team in 2004 and played his final big league game on June 24, 2005. Just yesterday I didn’t want to use a scan of a card, despite the high quality, because it had an autograph that wasn’t on the card when it was released from the factory. So today I decided to use a card that came from the factory with an autograph. This is not only the first time for Johnston in the Card of the Day series, it’s also the first time for the 2004 SPx set. 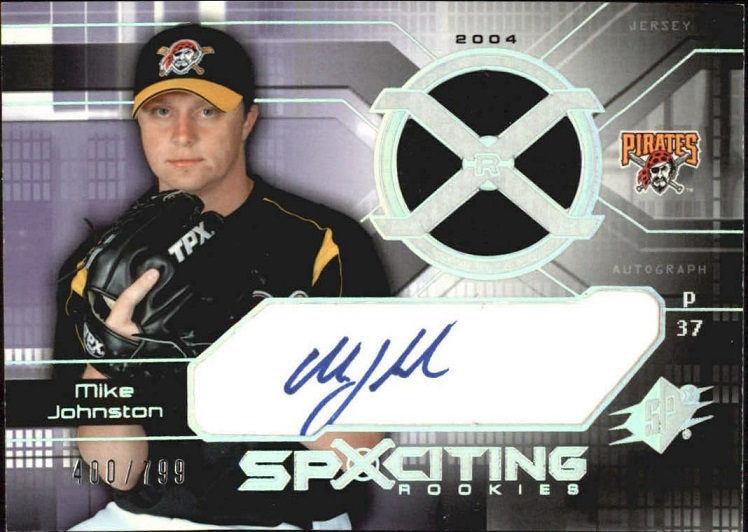 Johnston doesn’t look happy about being on this card. Maybe he didn’t know that they were cutting up one of his jerseys, or it had something to do with signing 799 cards (plus another 25 for a limited version card). At least his signature isn’t complicated so it probably didn’t take as long as it would if he actually wrote out his name. Looks like an M, a J and then maybe another M, or two L’s holding hands? Not sure. Above his autograph and to the right of his photo is the jersey swatch. Next to that, you have that great Pirates logo.

MJM/MJLL had a nice season as a reliever in Double-A Altoona in 2003, posting a 2.12 ERA in 72.1 innings, with 65 strikeouts. After that performance, he was added to the 40-man roster over the off-season. These cards were put out in December of 2004 after his rookie season with the Pirates in which he had a 4.37 ERA in 22.2 innings over 24 games. He actually had just one big league game left in his career. The timing of the release is interesting because many cards come out at the very end of the prior year, as in the 2023 sets will be released prior to Christmas 2022. I’m surprised that this set isn’t considered to be a 2005 issue. These cards were expensive when they came out, but it was packed with insert cards like this card of Johnston. A box of cards had 18 packs, four cards per pack, and sold for over $100. 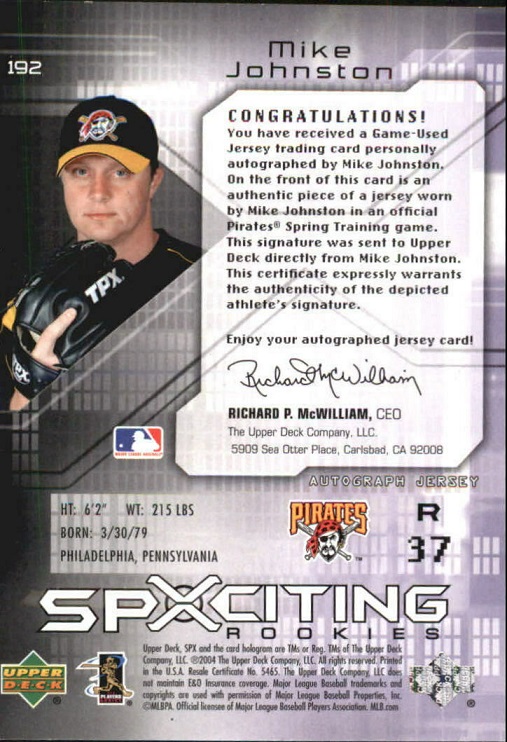 I’m wondering if Johnston would have looked happier if he knew ahead of time that they were going to use the same photo on both sides. The back is just basically letting you know that the autograph and jersey are both authentic and Upper Deck is congratulating you for finding it. There are no stats and just a small bit of bio info, along with the Pirates logo. I’m not 100% sure, but I think the “R” to the right of the logo stands for rookie, while the 37 is Johnston’s jersey number. I matched it up to a few others just to make sure they also wore the same number shown in that spot (They were all rookies with an “R” above the number as well).

If you’re interested in this card, you have five options on Ebay right now, though one is an auction and not a buy-it-now, so there might only be three by the time you check. The cheapest one is $4.99, with a best offer option. You can also go for the tougher card, which is called a Spectrum version and only 25 were produced. It doesn’t look much different than this one. There are two listed, one for $7 and one for $15.