Today’s Card of the Day came along in an odd way. Last year on this date, I picked a Mike Kingery card as our Card of the Day subject. It was a great pose from a set that was appearing here for the first time that day. I didn’t have many choices to match up the card to the daily history article because March 29th is a day for obscure Pittsburgh Pirates players being born. Kingery was the only player out of the six birthdays who had a card with the Pirates available.

I was thinking about doing another set that hasn’t been here yet and a mistype led me to today’s card. I hit 1996 instead of 1997 when doing my search on the Ebays and the first card that came up was a 1996 Topps Garrett Long. I looked at the card, checked to see if the 1996 set had been used here, then looked at the card again and said (pardon the language), what the heck, let’s use a card of a player who never made the majors. So here we are, checking out card #241 from the 1996 Topps set, featuring Garrett Long. 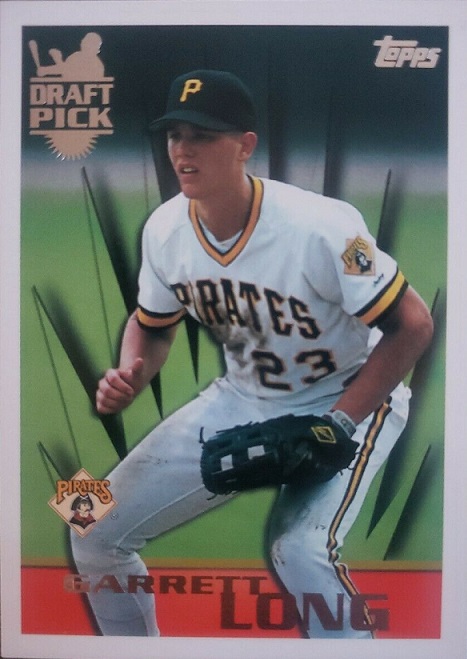 It took way too long to find a good scan of this card and even this one is a little lighter than what it looks like in person. Most of the scans were too dark and that draft pick logo in the top left was impossible to read. A lot of people had crooked scans (even this one is off a little, but others were much worse). The best ones all seemed to be autographed, and since it wasn’t a factory released autographed card, I didn’t want to feature it that way.

Anyway, there’s a young Garrett Long, fresh out of high school, just 18 years old in the photo. He was the second round draft pick of the Pirates in 1995, selected 40th overall out of Bellaire, Texas. He was picked nine spots ahead of Carlos Beltran, basically meaning the Pirates and everyone else passed on Beltran, including the Kansas City Royals, who got Beltran with their second pick. Their first pick didn’t even make the majors. The Pirates first pick was Chad Hermansen…

This set really was a simple design. White border, name, small logo, nothing else. This card only looks like more because they did that cartoon explosion thing for the draft picks, as well as adding the draft pick logo. While the Pirates logo helps the lazy design, just remember that all of those other 27 teams at that time had inferior team logos, so they didn’t look as good. 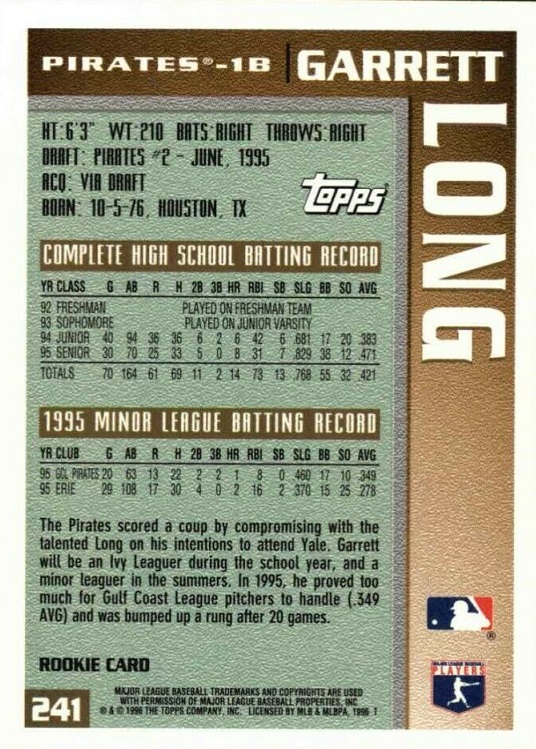 Whoever came up with this back design needs to be slapped on the nose with a newspaper and told “no”. Thin black writing on that background color is rough on the peepers and it doesn’t look good anyway. I’m beginning to see why I never featured the 1996 Topps set here before.

You don’t see too many high school first basemen (or second basemen) selected that high in the draft. They might end up at first base in the future, but prep draft picks are usually the more athletic types if they’re not pitching. I’m not saying he was a bad pick at the time, I really don’t remember him as a draft pick, but I did see him later in his pro career.

Long certainly seemed like he could make it after the 1999 season when he put up an .821 OPS in 109 games with Double-A Altoona at 22 years old. He had a nice walk rate, power and his strikeouts weren’t too high. However, the Pirates were quick to say that he would probably end up back in Altoona, even before Spring Training started, with the reason being that he was young for the level so there was no rush to get him to the majors (it was actually a group of three players, not just Long). He hurt himself lifting weights during Spring Training, and then his career was over after playing 42 games in 2000.

If you’re interested in this card, there are plenty on Ebay and they are cheap. One seller has three you can get delivered for under $2 (before tax) and then share two with your closest friends. There are six autograph copies, with the cheapest going for $4 delivered. There have been two sales in the last three months. One for $2.50 delivered and it was autographed. The other sold auction included two cards, and that went to someone who only had one friend or they didn’t like sharing and kept both.