Today’s another one of those first-time players who surprises me that I haven’t had them here before in this Card of the Day series. I think some of the more recent players get unintentionally snubbed because it’s hard to consider them as part of Pittsburgh Pirates history when it feels like they were just with the team. That’s why I usually give trades about five years before I add them to the history article that covers the date they were made. It’s also why I don’t include bios for players until they are former players.

I’ve written about Mark Melancon plenty of times, so it seemed easy to overlook him in this series. The man is celebrating his 37th birthday today, so it’s about time we get him into a Card of the Day article. To make it easier on my brain, I went with a set that uses a throwback design, though it’s one of my least favorite sets. Here’s a look at card #195 from the 2016 Topps Archives set, featuring Pirates closer (at the time) Mark Melancon. 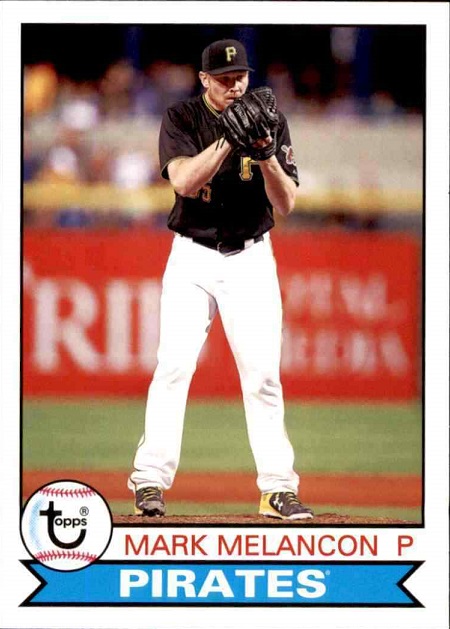 There it is, that awful 1979 Topps design. I don’t even like their logo from that year. There should be a Pirates logo in that spot, and the Pirates name should be in a yellow or gold banner. That would have helped, but it wouldn’t solve everything. Part of the problem with the 1979 Topps set besides the front design (not that the back is any better) is that they had awful photo quality for the players. So many of the cards look like they were naturally faded from the sun when you got them fresh in packs. Even cards graded gem mint (PSA 10) can look awful due to the photo quality. While that isn’t true here, it’s not like this card has a particularly great photo. It’s okay, no fault of Melancon, but there are much better photos in the set. It’s strange, because there are some cards that I like the look of from the Archives set, even though they used an old design that I don’t like. This isn’t one of them, but then again, the 1979 set is high on my list of least favorite sets. 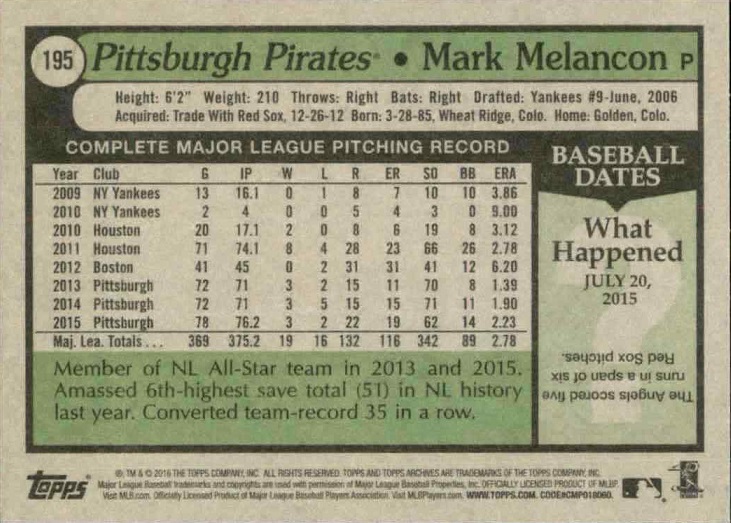 This looks exactly like the backs of 1979 Topps cards, except for all of the legal stuff and added logos at the bottom. They matched the bland look of the front with two different blah green colors on a gray background. Even the generic gray Topps man refused to appear on these cards (the may or may not be true). I do like that Topps didn’t change anything about the back, even though I hate the look of the originals. If you’re going to do a throwback, be all in on it.

Maybe you want this card, who am I to judge. If so, head on down to your local Ebay, where you can find 33 auctions for this card. As you might expect with a common card (he’s technically a semi-star I’d say), you can find numerous examples for under $2 delivered. There are other options as well, and I don’t like any of them. They had a blue border version which is numbered to 199 copies, and that can be acquired for $4 delivered. There’s also a 5×7 version that card be had for $8 delivered and the only one up has a best offer option. That was limited to 49 copies. Then there’s a gold 5×7 version that was limited to ten copies. That is pricey at $23, though it has a best offer option.