Today’s Pittsburgh Pirates Card of the Day comes from a set that we haven’t looked at yet, though it looks a lot like a set we have seen numerous times already. The 1981 Topps set is one of my favorite set designs out there, which I’ll quickly explain again below after we look at the front of the card. After the initial set of 726 cards were released in 1981, Topps extended the set by 132 cards and released them in a box as one set and called it the “Traded” Series, which they actually put in quotation marks on the box. It wasn’t their first attempt at a traded set, they did that in 1974 and 1976 in small numbers, but this was the first year of a long run of success with their Traded series. The 1981 Traded set has a couple of key differences from the follow up years, as you will see once we get to the back scan. For now, let’s look at card #729 from the 1981 Topps Traded set, featuring Gary Alexander of the Pittsburgh Pirates. 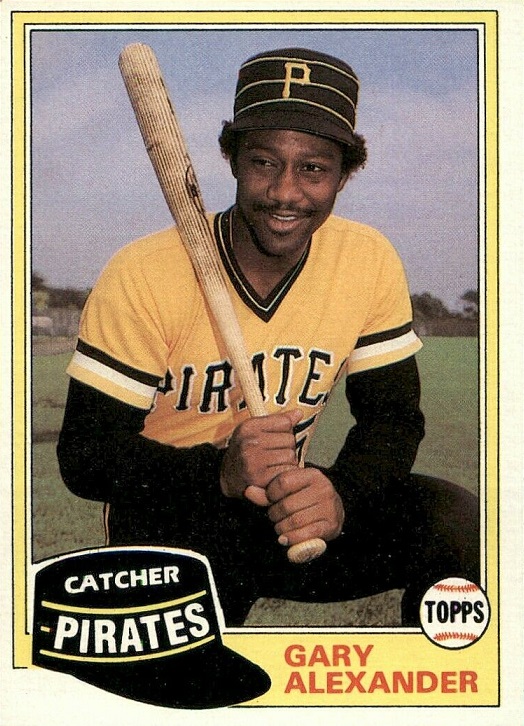 If you know the 1981 Topps set, then you know that this card doesn’t look any different from the regular set except Gary Alexander is on the Pirates and not the Cleveland Indians. The yellow border here looks great with the Pirates uniforms on these cards. For some reason it really makes them stand out compared to the four previous years, which really is probably my least favorite four-year stretch of Topps products if I had to pick one. Now that I write that out, the 1988-91 stretch would give it a good run for its money (feel free to let me know which one you like best of those two groups in the comments).

What I really love here is that Pirates hat in the corner. It looks so simple, and it’s a nice idea to put the team name and position in the hat. However, once you realize that they only used the pillbox style hat for the Pirates and the other 25 teams all had a different looking rounded cap, you truly appreciate what they did there. I’d like to shake the hand of the person who came up with that idea. 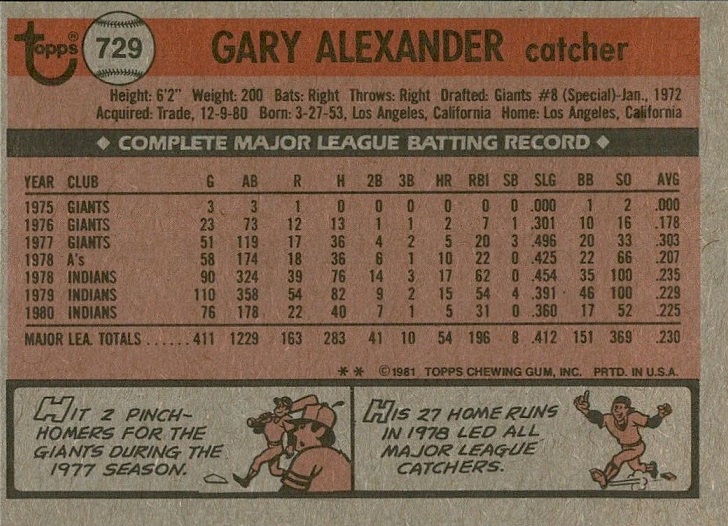 The back of this card doesn’t give you hints that it is a Traded series card, unlike the following sets from Topps. Those cards will have a variation on the coloring of the back, so you can see a clear difference when the regular set and Traded sets are side-by-side. Topps started that color difference in 1982. They also started numbering the cards a different way in 1982. Those cards are numbers 1-132 with a “T” before the number. If you didn’t know any better with the size (amount) of the 1981 Topps set, you wouldn’t know that this is a Traded series card.

Alexander was part of an awful trade that saw the Pirates give up Hall of Fame pitcher Bert Blyleven for four players, with none of them contributing much to the Pirates. Alexander lasted one season, then got released during Spring Training in 1982. As you can see on the card, his stats were on a downward trend at the time and it continued into the strike-shortened 1981 season. He was around long enough to get three cards with the Pirates, and I’m sure I’ll feature him here at least once more because I really like the look of one of his other cards. I almost picked that card, but I wanted to knock off a set I had not featured before.

If you’re interested in this card, all of the laws of common cards on Ebay apply here. You should be able to get this card delivered for under $2, even if some other readers beat you to the punch. There are currently 35 examples of this card on Ebay and none have sold in the last three months.