The Pittsburgh Pirates and New York Mets completed a four-player trade on this date in 1988, which had two prospects going each way in the deal. The big name in the deal for the Pirates was first baseman Randy Milligan, who didn’t work out for the team, though not entirely all his fault. He had just three games of big league experience before joining Pittsburgh, and then they moved on after just 40 games, with nearly half of those games coming off of the bench. He was dealt to the Baltimore Orioles just eight months after being acquired and he thrived there for a time, putting up 11.1 WAR in four seasons.

Before he left Pittsburgh, Milligan made it into a few baseball card sets. One of those sets was the 1988 Donruss Rookies set (actually called “The Rookies”, but that just sounds weird in that sentence). It contained 56 cards and only came in factory sealed boxes for retail purchase, though some people obviously pulled the best card and sold them separately. So if you want one of these cards, you don’t need to buy the set, there are plenty of single card auctions (see pricing section below). Here’s a look at card #32 from the Donruss Rookies set featuring Randy Milligan. 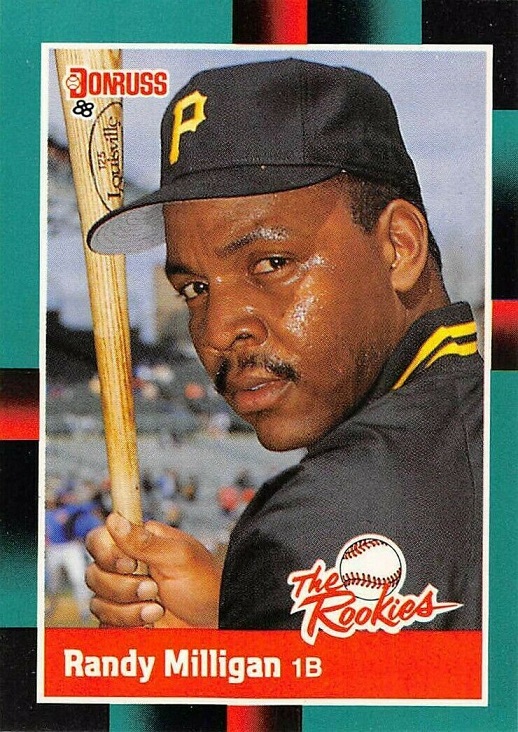 The regular set from 1988 Donruss was massively overproduced, which makes them cheap to buy today, despite being produced 34 years ago. You can get an entire set for about $15 and most of that price is the cost of delivering that many cards. One of these Donruss Rookies sets recently sold on Ebay for $18. That tells you that the smaller set is not only more desirable, it was also produced in a much lower number, though that doesn’t make them rare.

The two sets have a similar look with the same border design and the section for the name/position looks exactly the same. The two big differences are the “The Rookies” logo in the bottom right of the photo, and the greenish color on the border is a darker blue on the regular card. There was also a third set put out that year called Donruss Baseball’s Best and the only difference between that and the regular set was orange in the border instead of blue. As you might expect, there aren’t a ton of photos out there with Milligan shown on the Pirates. 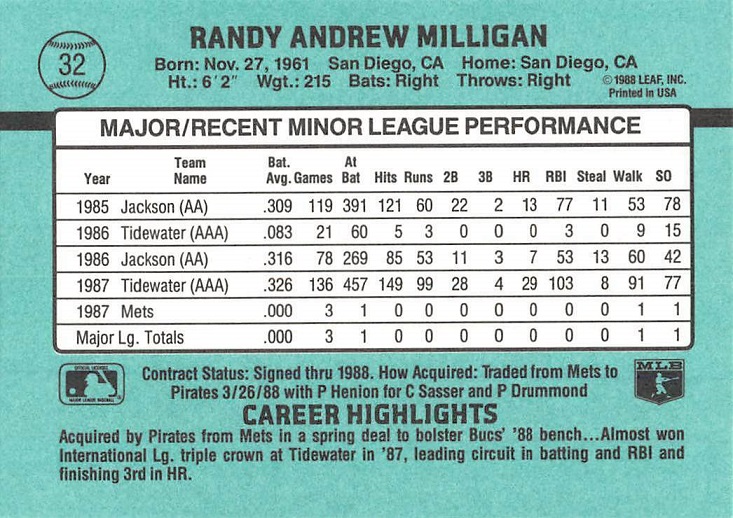 The back here basically looks the same as the back of the regular cards from the 1988 Donruss set, so these cards could be a little confusing if you’re just looking at the back. Usually when companies produce multiple sets they will change the numbers a bit, like the Topps Traded cards always had a “T” before the number, or the Fleer Updated had a “U”. Donruss didn’t care for that idea, but they did do something a bit different. A player with the career stats of Milligan above would only have the 1987 Mets stats on the back in the regular set. For the Rookies set, they added in minor league stats (some players are in both sets). As you can see by Milligan’s stats, with power and patience and solid contact skills, there was something to be excited about with his arrival, even though it didn’t work out for the Pirates due to them moving on so quickly.

If you’re interested in just the Milligan card and not the set, you’ll be happy to know that you have numerous options on Ebay. Not all of them are good values, mostly due to high shipping charges, but you’ll be able to snag one for $2 delivered, even if a few people beat you to Ebay to get their copy. Happy collecting!