Today’s Card of the Day was one that I didn’t know existed, at least not that I remember. I probably read about it when this set came out, and I remember buying some packs looking for specific cards, which I believe I later just bought off of Ebay. I did not buy today’s card though. It features Jimmy Sebring of the Pittsburgh Pirates and some guy named Denton True Young from the Boston Americans. In 2003, Fleer came out with a Fall Classic set. It was a strange set that had more inserts than cards in the base set (87). Today’s card is one of those inserts. This card was tough time find in general, but not tough compared to other inserts in the set that had a much smaller print run. The fact that it is tougher than normal to find shows up below in the pricing section for availability of this card. Here’s a look at an outstanding offering from the 2003 Fleer Fall Classic set. 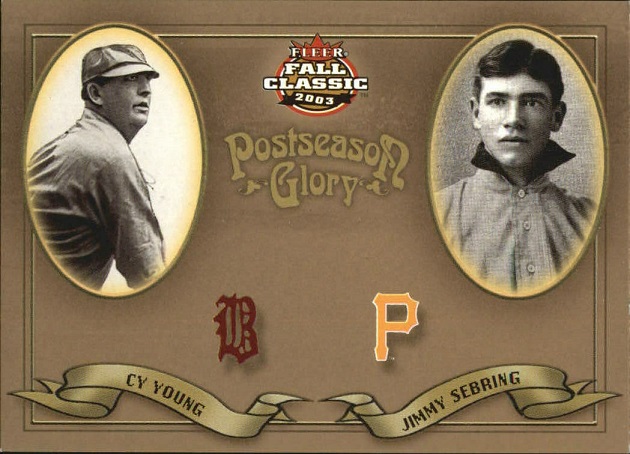 The front leaves you in suspense here. You get a photo of one of the greatest players in baseball history, alongside the photo of a player who is the answer to a trivia question that many people ask, but very few people know that he’s the answer. That’s a teaser for the back of the card. I really like the setup and look of this card except for one thing. They used the old school “B” for Boston, but they used the newer “P” for Pirates (I always assume this for no particular reason, but one person asked if it stood for Pittsburgh, especially since the “P” existed long before Pirates was an official name, so they might be right). 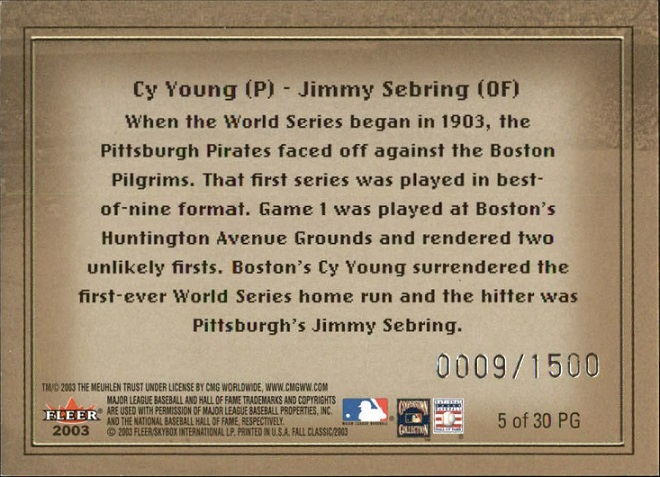 The back lets you know which card you have out of the limited print of 1,500 copies. This particular scan is from card #9 in that print run. Notice that it says “Boston Pilgrims” for the Boston name and I used Boston Americans up top. Both are fine to use, but Americans is the more accepted name. Team names weren’t official back then, just like I always give the disclaimer when people say that Pirates became the team’s official name in 1891. That couldn’t be more wrong if it tried, 1891 is just the first time that name was associated with the team. The Pittsburgh team itself used the name Braves late in 1893, all of 1894, and into the early part of 1895. They publicly denounced the name Pirates in 1898, saying it didn’t fit the team, and they became the Patriots, to the point that they switched team uniform colors to red, white and blue. Pirates returned in 1899, but even that didn’t appear on their jersey until 1912. So Fleer didn’t make an error here, they just used a name that wasn’t as widely accepted as Americans.

The interesting part here about Sebring is that he is a virtually unknown defeating the all-time wins leader in a one-on-one battle. Part of the reason Sebring had such a short career in the majors is that he passed away at age 27, after the 1909 season (see more in today’s history article). He wasn’t a star by any means, so he still would have been a forgotten player of the past in all likelihood, but it would have been great if his baseball career ended on his own terms. He lives on though today, due to one timely swing.

If you’re interested in this card, there are three copies available on Ebay right now and they range in price from $3 to $4.50 delivered. You’re not going to have many options if you want a Pirates card of the guy to hit the first World Series homer, but there is another card of him in this Fleer Fall Classics set, which can be had for around $2 delivered from multiple sellers.