Christopher Bostick didn’t get much of a chance with the Pittsburgh Pirates. He probably should have been given more time with the team, especially after hitting .296 in 20 games during the 2017 season.  Despite a solid big league debut in a utility role, he batted just two more times with the Pirates before they cut ties with him during the 2018 season. He’s celebrating his 29th birthday today, but he’s been out of baseball since 2019. He’s featured here in today’s Card of the Day article on the only Pirates card that came up in my image search, though as you will see below in the pricing section, there are numerous variations of this card in the 2017 Topps Update set. The pricing section is big, so let’s get right into the card itself. 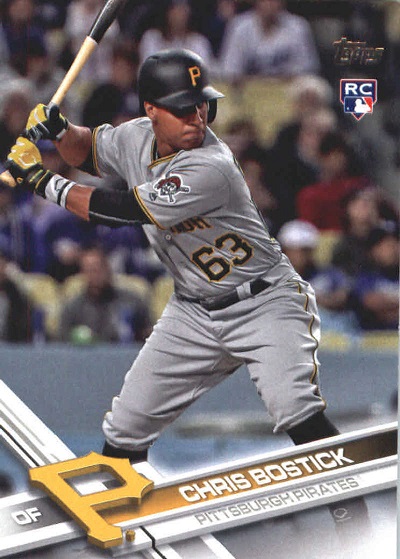 A lot of the new Topps cards blend into each other with similar looks each year, but I’m a fan of the 2017 design here. While it’s more common now, I always liked the different look of cards that went without borders. I don’t know what the design is supposed to be in the bottom, looks like a confusing set of intersecting roads, but it looks good if you don’t try to figure it out. The team logo, while very boring now, looks good there, and I like the name/team design. I also like that “RC” logo they use for rookie cards. It’s a solid quality photo of Bostick as well, with the Pirates logo on his sleeve that is so much better than the main logo, along with the road grays, which are always top notch. 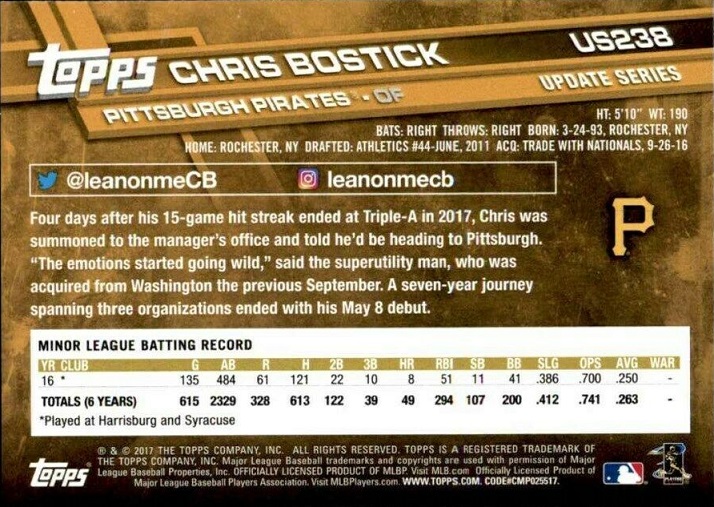 The back of the card has a nice look and some interesting additions you obviously didn’t see on older cards. Those are his Twitter and Instagram names in a box right above the little fun facts section about the timing of his promotion to the majors and how he was given the news of that promotion. The stats section leaves something to be desired, but the card itself presents a nice look, and they included the team logo again, which always helps, even with that particular logo (why is it so boring!).

If you’re interested in this card, then you have multiple harder-to-find versions in addition to the base card used above. The base card adheres to the standard rules and regulations of common baseball cards, with $2 being a normal price to pay for the purchase and delivery of the card. Right now on Ebay you also have the choice of an autographed version (signed after it was released) for $5.50 delivered. Then there are chase cards from Topps that include a black border version that was limited to 66 copies, and the cheapest one of three copies is $13.50. There’s a version called “vintage stock”, which was limited to 99 copies and it can be had for $12 for the only copy currently on Ebay. Then there is a bigger version of the card (5″ x 7″) that comes in gold and clear gold, with ten copies of each available. One seller has both, in separate auctions going for $11.50, though there’s another clear gold copy going for $10.

Another version has a photo negative look and it is $8-$10, with multiple copies available. Then there’s a rainbow foil version for $9 delivered. There’s also a special Mother’s Day pink border that was limited to 50 copies and it is listed for $9 as well. There’s a regular gold border that is going for as much as $6, though most of that price is delivery and you can find it cheaper. Finally, there are two mini versions, which can be had for around $5. There is another mini version with red print that was limited to five copies, but that auction will be done days before you see this article. It has a starting price of $5.99 delivered with no bids yet. Happy collecting!