I always pride myself on knowing obscure Pittsburgh Pirates. I’ve written something about every player in team history multiple times, so I shouldn’t get stumped when I see a name, but when I saw Jason Phillips today, I needed a reminder. My first thought was the catcher for the New York Mets and Toronto Blue Jays and I knew he never played for the Pirates. Then I read his bio that I wrote (and subsequently updated today) and it jarred a faint memory.

So I don’t forget the 1999 Pirates pitcher Jason Phillips any time soon, he gets the spotlight for today’s Card of the Day article. If the same thing happens next March 22nd, then I’ll do another Card of the Day article for him that day. I saw four options showing him with the Pirates on Ebay, plus a variation of one of those cards, so he might end up here another time anyway. That is especially true when you consider that two of those sets haven’t been featured here yet. We start his journey here with the 2000 Fleer Tradition set, a favorite of mine from that time period due to the front design, which looks a lot like an old Topps set….hmm. Here’s card #139 from that set, featuring Jason Phillips. 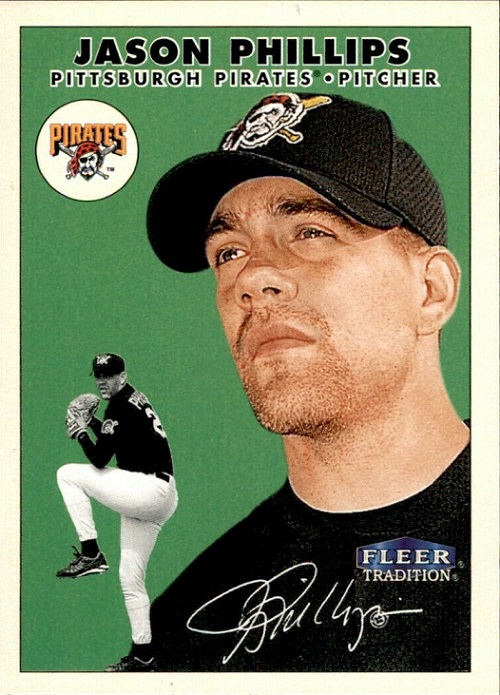 This card checks a lot of boxes of the 1954 Topps set. The bigger photo is a portrait shot, the smaller photo is an action shot. There’s a facismile autograph. There is one color for the backgrounds in both sets. The name at the top, with the team name and position one line down, and the team logo on the front in the top corner. That’s 7-8 checks, depending on if team name/position is one or two checks. I’m not sure why a Fleer Tradition card looks A LOT like a 1954 Topps card, but it happened and we just need to sit back and enjoy it. 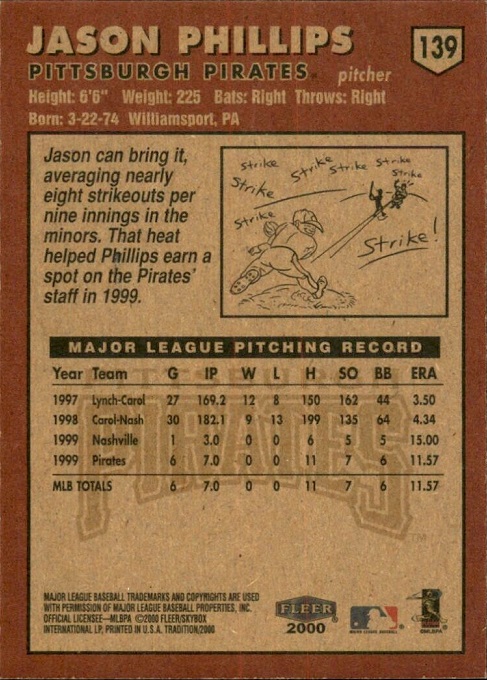 At least the back is completely different, while still keeping the old school feel. The 1954 Topps backs have a horizontal layout and a Christmas feel to them, with red and green coloring. The first thing I really like here is the light Pirates logo as the backdrop for the stats. The first thing I don’t like here is their choice of stats to include. When you look at that back, you think he skyrocketed through the minors, needing two full seasons and one game before he made the majors. In reality, he debuted in pro ball in 1992, and this card is missing his first five years of stats, yet they left all of that blank space between his stats and the annoying legal mumbo jumbo.

While I included his bio in today’s This Date in Pittsburgh Pirates History article, I’ll answer the question that is clearly on your mind after looking at those limited stats in 1999. Phillips started the 1999 season in the majors, got sent to the minors on April 30th, then injured his shoulder in his first Triple-A game and missed the rest of the season, as well as most of 2000.

If you’re interested in adding Jason Phillips to your growing collection of Pirates cards, then you can go to Ebay and get one for just over $2 delivered. Not many of these cards are listed and some of them have high shipping charges for a solo card. There are two autographed cards, but they are not cheap, with one at $22 and another at $45. He must not be a frequent signer because there are no cheap options for one of his signed cards. Ironically enough, the other Jason Phillips, who I remembered first, has about 50 signed card options that are cheaper than the Pirates Jason Phillips.